(Taoyuan, Taiwan & New York, USA – March 9, 2022) – Undeterred by the global pandemic, Taoyuan City continued its City Leaders Conversations Series, co-hosted by the Intelligent Community Forum. The Series engages Taoyuan’s fellow cities in conversations intended to share best practices among those that are leading the “smart city” or Intelligent Community movements. After conversations with Binh Duong (Vietnam), Eindhoven (Netherlands), and Edmonton (Canada), Taoyuan engaged with Vienna (Austria) in February for an excellent discussion with a famous city that is pushing forward with a net-zero emissions policy and programs in the areas of industry and water management that are forward-looking. 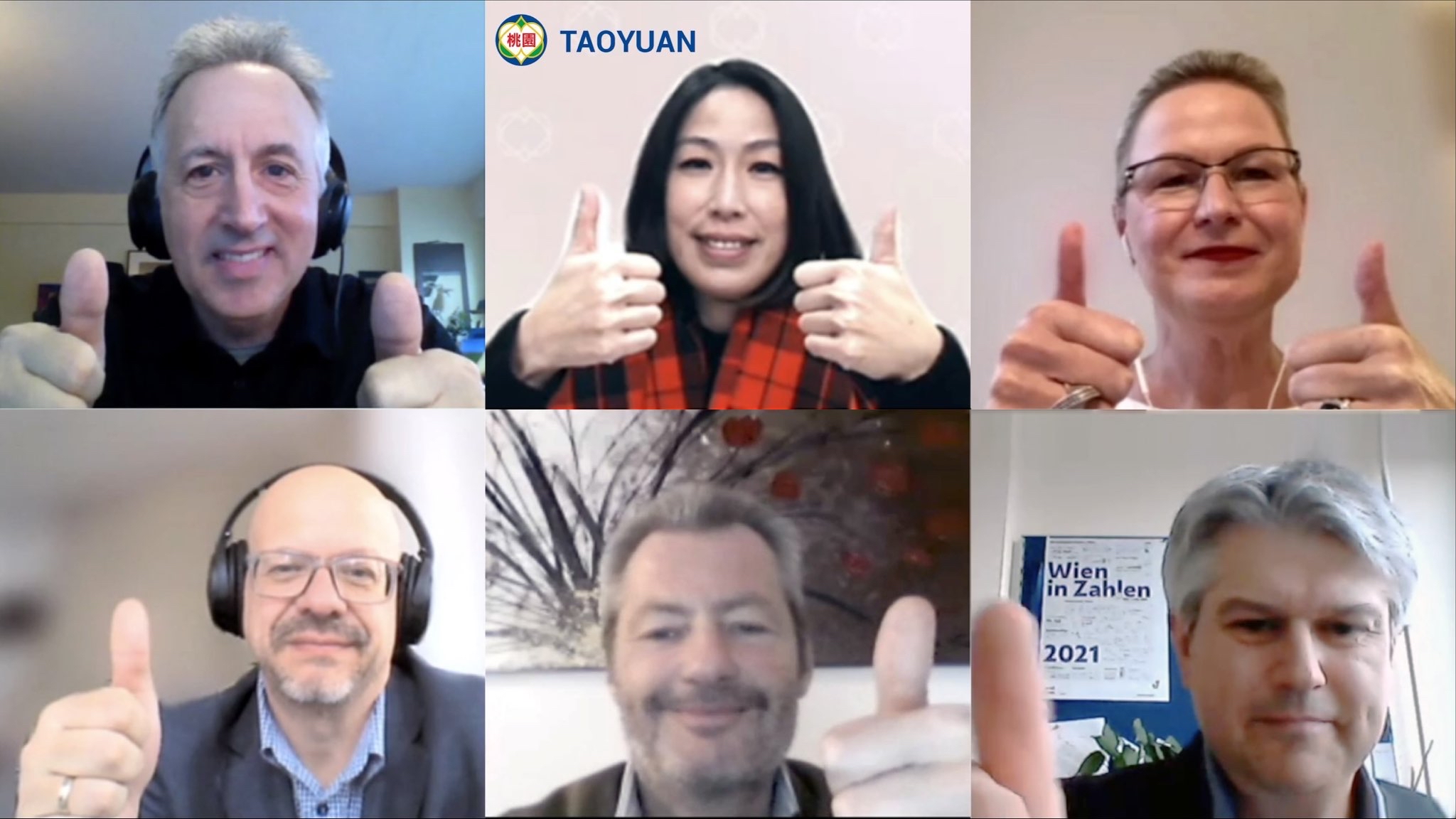 General Director Yu noted that Taoyuan is committed to “running the city intelligently using its sophisticated Internet of Things (IoT) network to expand the use of artificial intelligence (AI) to enhance the effectiveness of the city’s operations on behalf of its citizens. Taoyuan shares relevant information with citizens and has involved constituents in the decision-making process.

Later in the conversation, she added that Taoyuan is committed to sustainable development. The city has several biomass power plants and Taoyuan, according to Ms. Yu, has the most green electricity production output in Taiwan. In 2020, Taoyuan produced more than 600,000,000 kWh of renewable energy, equivalent to enough electricity to illuminate 400 Taipei “101” buildings at once. (Taipei’s “101” building is the eleventh tallest in the world.)

Regarding the subject of water, Taoyuan noted that it was important because as the city with the highest industrial density in Taiwan, it had to develop an ICT-enabled cloud monitoring system for underground water management. Through this system, each industrial zone can use groundwater as a source for its backup plan which, according to the Director, improves industrial endurance and urban resilience by making full-use of discharged water.

Vienna noted that as a pioneer in smart city development in Europe, it prides itself on how it has linked its “green” policies and digital transformation processes to enable modern public services. Moreover, Vienna places emphasis on solid partnerships between public and private sectors, emphasizing not only the green economy but also knowledge transfers as the foundation of a city’s prosperity.

Wolfgang Hassler, Deputy Head of Department for Economic Affairs, Labour and Statistics of Vienna, said that Vienna devised the “Vienna 2030” program which has six high-level topics.

Sabine Ohler, Director of International Business, Vienna Business Agency, stressed that Vienna has one of the largest ICT infrastructure networks in Europe, topped only by London, UK and Munich, Germany. Vienna's ICT revenue is four times higher than its tourism industry.

General Director Yu of Taoyuan echoed that there were many similarities between Taoyuan and Vienna, and all agreed there are mutually beneficial areas for cooperation.

“We were pleased to be able to moderate this important global discussion between two of the world’s premiere cities and to find common areas of interest and value to any city listening to the discussion. Both Taoyuan, named the world’s most Intelligent Community in 2019, and Vienna, which is perennially on lists as one of our world’s Most Liveable Cities, share a philosophy that the tools of digital technology and transformation in the local government’s hands should focus on providing better city services and a quality life for its citizens,” said ICF Co-Founder Louis A. Zacharilla. “We hope more cities learn from these conversations.”

The monthly series of “Taoyuan x ICF: City-Leaders Conversation” began in January 2022. Taoyuan, which initiated the program with the ICF, will share insights on these intertwined aspects of net zero emissions with both public and private sector representatives among 400+ global communities worldwide during the annual Smart City Summit & Expo 2022 in March (https://en.smartcity.org.tw/index.php/en-us/).

The Forum has two Institutes dedicated to the study of the Intelligent Community and national organizations in Canada and Taiwan. In 2012 ICF participated at the Nobel Peace Prize conference in Oslo. ICF’s co-founders have spoken in every part of the world and have given TED Talks. In 2014, ICF’s model and work were recognized by the U.S. Department of Commerce under the Workforce Innovation and Opportunity Act, which, was "aimed at creating a more flexible and responsive system of workforce development to meet the needs of employers looking to fill 21st century jobs.”

About ICF Taiwan
ICF Taiwan is a nonprofit organization representing the intelligent communities in Taiwan.
See other pages related to ICF Taiwan
Share on