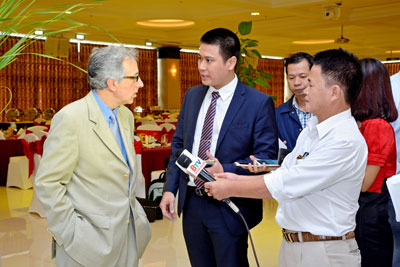 In December, the Intelligent Community Forum’s co-founder, Louis Zacharilla, was invited to Binh Duong by the leadership of Becamex and the Smart Region Binh Duong to spend time with the political, academic and business leaders and to observe the Binh Duong.  The occasion was the official launch of the Smart City Project’s organizational structure and advisory board.  Lou gave a rousing Keynote address at a conference, “Smart Cities, Triple Helix Binh Duong.”  He then spoke with a working group for the smart city project, which will also be tasked with submitting a future nomination form to ICF for the Awards program.  He was interviewed on Vietnamese national TV and met with Mr. Tran Van Nam, Secretary of Binh Duong Party Committee, and the leadership of the region at a media event in the new Administration building.

“It was great honor to have been the Keynote speaker on the day of the announcement of Binh Duong’s ambitious goal to become Vietnam’s first Intelligent Community,” said Zacharilla. “The region has embraced the ICF criteria, the “triple helix” concept which Eindhoven and others have perfected and has made a serious first steps toward its goal of becoming the ‘Pride of Vietnam.’"

The trip was designed to make an initial connection between Binh Duong and the Intelligent Community Forum.  The city of Eindhoven and its Brainport organization have been encouraging the group to continue to use the “triple helix” method and the ICF criteria as cornerstones for its emergence into an Intelligent Community. 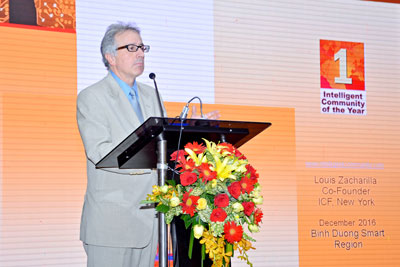 Binh Duong has a great advantage as it starts to evolve toward an Intelligent Community, including a large swath of high-quality industrial areas and manufacturing companies.  Recently, the Dutch lighting company, Philips, invested in the region by establishing a lighting institute for research and development.  However, Mr. Zacharilla reinforced the region’s understanding that it needs a creative, innovative and entrepreneurial system, including a sophisticated supply chain network with solid, reliable suppliers. He also reinforced the notion that an Intelligent Community goes beyond “smart” technology-centric development and develops human potential in a scalable fashion.