The ICF has posted a nomination form at www.intelligentcommunity.org/nominations. There is also a community self-test to determine if a community could be a contender for an award. Nominations will close on Monday, September 23, 2013.

Communities large and small, urban and rural, in developing and industrialized nations are all invited to apply. Nominations are accepted from local governments, institutions, national government agencies and consular offices. There is no cost to submit a nomination. On average, ICF tracks the progress of 400 communities each year through its own research as well as nominations submitted by communities.

White Paper on the Transformative Power of Culture 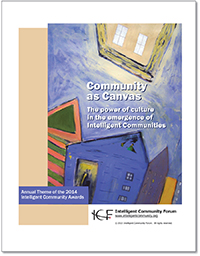 With the opening of nominations, ICF has also published a white paper exploring the theme of the 2014 Awards, Community as Canvas: The Power of Culture in the Emergence of the Intelligent Community. The paper explains that when cities and regions seek to chart a new course for economic development, culture matters greatly. The culture of the community forms the launch pad for every program and project. It provides a wide range of intangible assets that Intelligent Community champions put to use. It helps determine how readily new ideas are accepted. It can supply the words that persuasively explain a vision of the future and build support for it, and the narrative that helps people understand where they belong in a changing world. The white paper offers analysis and advice based on the experience of ICF’s past Top7 and Intelligent Communities of the Year. Its publication is made possible in part by the financial support of Powernoodle (www.powernoodle.com), a cloud-based platform that engages people in the decision-making process.

Stages of the Program
The Awards program is a 12-month, three-stage, data-driven process:

Criteria for Becoming an Intelligent Community
Evaluation of nominations is based on the ICF's five Intelligent Community Indicators, which provide the conceptual framework for understanding all of the factors that determine a community's competitiveness and point to its success in the broadband economy.

In addition to ICF's indicators the Awards are guided by an annual theme. The 2014 theme, Community as Canvas, looks at three specific aspects of culture: as art and craftwork that has both economic and social value, as heritage that gives a place its identity, and as attitudes arising from that heritage that determine how people react to change.

Arts and crafts have an emotional power and have direct economic value, especially with the rise of digital arts. Art can change citizen perceptions, and revitalize the image of the community to attract new investment and retain existing investments and jobs.

A community intent on creating or growing business sectors that require significant creative input can improve its chances by making sure that “cultural infrastructure” is in place to meet the demands of entrepreneurs and employees. Innovation is a pillar of any Intelligent Community and that innovation applies to culture as much as it does to any other part of the economy.

Community as Canvas is available for download from the Nominations or Publications page of the ICF site (www.intelligentcommunity.org/nominations).

About Intelligent Community Forum
The Intelligent Community Forum (ICF) studies and promotes the best practices of the world's Intelligent Communities as they adapt to the demands and seize the opportunities presented by information and communications technology (ICT). To help communities build prosperous economies, solve social problems and enrich local cultures, ICF conducts research, hosts events, publishes books and white papers and produces its high-profile international awards program. Since 1999 ICF has become an international movement that attracts the attention of global leaders, thinkers, and media observers. The ICF Foundation consists of 119 cities and regions that have been designated as Intelligent Communities by ICF and which participate in an ongoing global dialogue to strengthen local economies. In 2012, ICF published “Seizing Our Destiny” a book about Riverside, California and six communities who were named to ICF’s prestigious list of Top7 in 2012. For more information, go to www.intelligentcommunity.org