Is Innovation Essential – or Just a “Nonsense Word?” 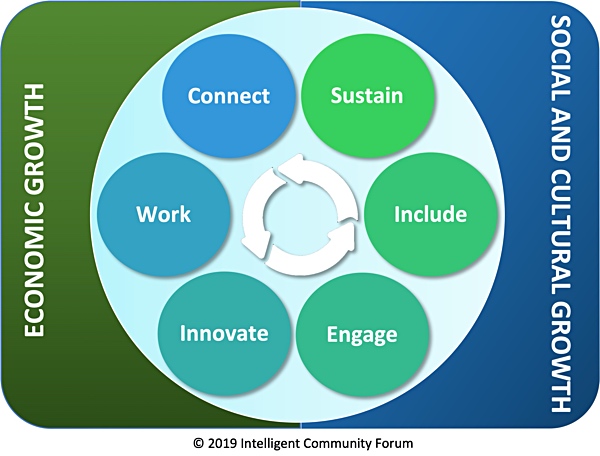 Innovation.  It’s a popular, misunderstood and kind of squishy term that nonetheless plays a big role in today’s world.  A Google search on it will earn you 1.65 billion hits.

There’s a reason for that.  Economist Robert Solow won the Nobel Prize more than 30 years ago for proving, for the first time, that 80% of all growth in the economy comes from the introduction or use of new technology. So, if you are engaged in creating or putting to use a new way of doing things, you have a shot at your share of 80% of growth.  If you are devoted to doing the same old things, you can hope for a share of the 20%.  Which would you rather have?

Have the ‘Magnet Cities’ Lost their Magnetism?

For all the damage, frustration and sorrow that COVID19 has brought us, it has also taught us lessons we needed to learn.

Some are personal. It turns out that my health depends on your health. If you refuse to wear a mask, you are expressing – not your independence – but a willingness to infect me.

Some are political. It turns out that, when we allow working people to live in poverty with no medical insurance, we create reservoirs of infection that keep blazing up like wildfires – or perhaps the avenging fires of a just God – to engulf us.

It was just Yesterday, or 25 years ago, as some people call it, that John, Robert and I produced an event in Toronto called “Smart95.” Most of you attending or downloading the video from this year’s ICF Summit were not there. But there were two features of that event that have withstood the test of time because their arrival was inevitable.

The event in Toronto (a city that went on to become the Intelligent Community of the Year in 2014) was the first event in history to use the word “Smart.” You can look it up. John Jung named it and a search revealed it was not in use anywhere. It gives us bragging rights for life, I guess. Most important, it triggered a movement and a way of thinking that has spread out far and wide, from East to West.

Maybe it’s just me, but I keep thinking I hear the sound of “Smart City fatigue” setting in.

Since IBM coined the term and Cisco quickly followed its lead, there have been, according to the web, three generations of smart cities. There have been academic papers and workshops and massive conferences. Multinational, national and local programs have poured billions into projects. Technologies have been developed to improve how cities manage everything from energy, water, public safety and pollution to transportation, healthcare and tax collection. Consultants have prospered, IT systems sales have grown and CIOs have earned new respect. Now, after more than two decades of smart cities adoption, what do we have to show for all that investment?

In the 2016 Intelligent Communities Awards, Hamilton, Ontario, Canada was named a Smart21 Community. To build further on this success, the city created a task force to examine Hamilton’s infrastructure, identify gaps in its digital strategy across the municipality, and develop an action plan to make Hamilton a destination for investment.