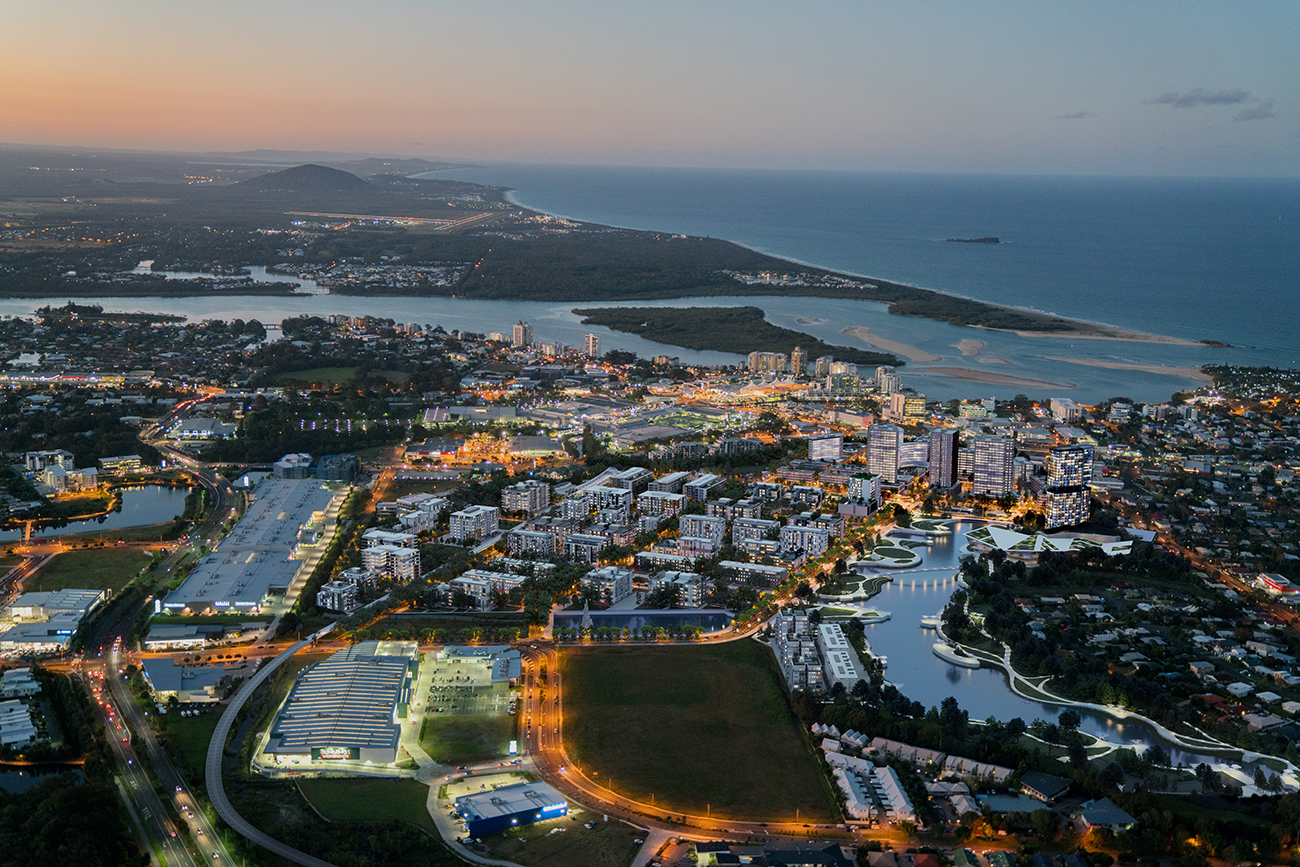 Sunshine Coast Council worked with leading business, industry and the Queensland Government to develop the Regional Economic Development Strategy 2013-2033 which provides a 20-year vision and blueprint for sustainable economic growth to transition its economy from the challenging times experienced as a result of volatile global financial conditions to a new and more diverse, adaptable, robust and vibrant economy.

And yet, the future looks bright on the Sunshine Coast. The region has averaged 2.7% annual growth over the last decade, making it one of the fastest growing areas in Australia and is independently ranked as the second strongest performing economy in the state of Queensland.

Its economy continues to evolve into a modern, smart economy based on sound growth across numerous high value and knowledge-based industries including professional business services, innovative manufacturing and numerous high-tech start-ups.

The Sunshine Coast government introduced the “Speed It Up” campaign in 2016. The campaign is designed to spread knowledge of the benefits of high-speed Internet access as well as how to obtain it. As part of the campaign, Digital Sunshine Coast has partnered with a variety of telecommunications providers in the area to display coverage maps of business grade broadband availability on its website (digitalsunshinecoast.com.au). The site also provides a free Wi-Fi Locations tool for residents to find sites with public Internet access. Finally, the Digital Sunshine Coast website includes as Want Faster Internet page with a short survey that residents can take to tell the government more about their Internet needs. The website experienced an average of 1000 page views per month in 2016, with hundreds of submissions on the Speed It Up and Want Faster Internet pages. The city council then used the data gathered to negotiate better coverage areas with local telecommunications providers.

Based on the data gathered by the Speed It Up campaign, the city has installed 260 free public Wi-Fi access points in more than 45 locations throughout the city as part of the Sunshine Coast WiFi Network. With the new Wi-Fi availability, the Sunshine Coast has set up beacons to provide localized information for the community and visitors, including guided walks and art sculpture and restaurant locations. The free Sunshine Coast Council app allows anyone connected to the public Wi-Fi to access this information as well as pre-order food and drinks at the stadium, book restaurants and obtain event guides. The Council has also developed a disaster hub that may be accessed through the app or via the web to provide safety information, important warnings and breaking news in the event of a local emergency.

The Sunshine Coast WiFi Network also has IoT applications. Data collected from public WiFi usage statistics has been used by Council, Chambers of Commerce and local businesses to inform decision making and optimize services provided to the community. The Sunshine Coast Stadium uses the public WiFi network to advertize event food and beverage offers to the crowd, and Downtown Caloundra uses smart WiFi data to determine the success of events in attracting people to the local shopping area. Free public WiFi in key visitor destinations also aids in increasing user generated content about the region on social media and travel sites, improving the Sunshine Coast’s appeal to tourists.

From 2020, the Sunshine Coast will deliver the fastest telecommunications connection to Asia from Australia's east coast and the second fastest to the US through a new 550km submarine optic fibre cable which now connects to the 9600km Japan-Guam-Australia submarine cable. Construction of a cable landing station was completed in September 2019 and the submarine cable landed on the Sunshine Coast on December 23, 2019.

As of 2016, the Sunshine Coast has lowered its youth unemployment rate to only 5.4% with a series of programs and initiatives. The city held its first ever Job Show in August 2015, showcasing current and upcoming job vacancies throughout the Sunshine Coast. More than 2000 people participated in the Job Show, including 62 of the Sunshine Coast’s largest public- and private-sector employers. The Show also featured workshops by industry professionals to educated job seekers about the knowledge and skills they will need to enter those industries. The Job Show has become an annual event in years following due to its success.

The Sunshine coast hosted the Future Careers+ 2025 Expo in 2016, 2017 and 2018, providing a wealth of information on careers in technology and innovation as well as the education pathways required for them. More than 60 exhibitors showcased products and prototypes at the expo with 1,600 students, parents and educators attending. After the expo, the Future Careers content was serialized in magazine form and distributed to 60,000 homes in the city. The city also hosted its first CoderDojo in June of 2014. CoderDojo is a global collaboration that provides free learning to young people, particularly in the area of programming technology. The Sunshine Coast CoderDojo covers a wide variety of topics including basic web, app, and game development. While the first CoderDojo was held at the Institute of Professional Learning, in subsequent years the program has been expanded to three Sunshine Coast libraries due to its popularity.

TAFE (Technical and Further Education) Queensland East Coast is a program that offers entry-level skill sets and certificates as well as high-level diplomas and bachelor degrees. The majority of TAFE courses combine classroom learning with job placements with local employers to enable students to experience hands-on learning in a real-world environment. TAFE courses are available to high school students in year 11 and 12 and provide certifications as well as qualifications for post-secondary education requirements. The program also serves those looking to change or improve their careers through new skills and licenses or university course work. TAFE also has a dedicated apprenticeship program that combines structured and workplace training with paid employment.

In addition to training programs, the Sunshine Coast has offered a series of innovation-focused programs over the past several years. These programs include the Mayor’s Telstra Innovation Awards, Startup Weekend, and the Generation Innovation Challenge. All three programs feature youth entrepreneurs with innovative ideas, providing a platform for students to share their ideas with potential employers across the Sunshine Coast. RoboCoast is a hub of state and private schools promoting robotics and coding through student training days, visits and a range of fun robotics competitions.

Between 2014 and 2016, the Sunshine Coast has grown from having only 1 innovation center and public co-working space to 7 co-working spaces, a new business incubator and 5 coding programs. The city council has taken a leading role in digital engagement to make this possible, including setting up the Entrepreneurship Ecosystem mapping project to coordinate and grow the local network of co-working spaces and programs. The map shows budding entrepreneurs where they can find support and resources from the government and business community as they start their businesses and provides an easy way for businesses to communicate and collaborate throughout the region. In 2019, due to growing demand, the ecosystem expanded from 7 to 10 co-working clusters hosting a total of 76 organizations, programs and activities.

The Innovation Centre Sunshine Coast (ICSC), established in 2002 as a wholly owned subsidiary of the University of the Sunshine Coast, serves as central hub for startups in the city with dedicated facilities, a prototyping lab, powerful online platforms, grants and seed funding connections and readily available mentors for new startup companies. Over 50 businesses are located at the Innovation Centre as of 2019, and more than 260 have graduated from startup incubator and accelerator programs since the center’s establishment with 89% still operating successfully. The Innovation Centre is the longest-running business incubator and accelerator of its kind in the region.

The Sunshine Coast Regional Innovation Program (SCRIPT) is a collaboration of local entrepreneurs, businesses, government stakeholders and community members designed to grow innovation and business capacity on the Sunshine Coast. SCRIPT is investing over AUD $1 million in collaborative activities and supporting entrepreneurs and innovators in bringing their ideas to commercial fruition. The program focuses on grassroots projects that help to connect, educate and inspire the Sunshine Coast community. In 2018 and 2019, SCRIPT has funded six projects and coordinated #TeamSunshineCoast at the influential innovation and entrepreneurship conference Myriad Festival in 2018. SCRIPT also hosted a 12-week startup onramp training and mentoring program for first-time startup founders in August and September of 2018. The onramp training program provided skills and guidance for launching tech and other startups successfully and on a global scale.

The Sunshine Coast Council has also served as an advocate and facilitator for the Smart Centre, which is a public shop front in the city. The area serves as a testing ground for Smart City technologies to enhance community education and stimulate ideas on adaptation and growth. The government has provided free Wi-Fi in 45 public areas as part of this effort to help gather data on movements and usage.

The 15 megawatt Sunshine Coast Solar Farm was completed in 2017, making the Sunshine Coast Council Australia’s first local government to offset 100% of its electricity consumption across all of its facilities and operations with green energy. These facilities include administration buildings, swimming pools, performance venues, community centers, libraries, and recreation facilities throughout the city. The Sunshine Coast Solar Farm is the only city-council-owned solar farm in Queensland and the first grid-connected, utility-scale facility of its kind in Australia. The solar farm is expected to save the city approximately $22 million over the next 30 years due to the council’s lower electricity costs. As of its first few years of operation, the Sunshine Coast Solar Farm reduced local government energy costs by AUD $2 million between 2017 and 2019.

The Sunshine Coast has one of the largest rooftop solar uptakes of any local government area in Australia, with 41% of dwellings choosing to harness the sun: 49,900 solar PV rooftops (equivalent to 183MW capacity). In April 2019, the urban centre of Caloundra was named one of the top five rooftop solar postcodes in Australia. In August 2018, the city council began installing 30 kilowatts of solar panels to the roof of the Nambour waste transfer station, further expanding its rooftop solar program and building on the success of the Sunshine Coast Solar Farm. Four of the council’s eight waste transfer stations already feature rooftop solar installations, with arrays added to Buderim, Witta and Beerwah early in 2019. The Sunshine Coast also added 60KW of solar power across Nambour and Caloundra during the 2018-2019 financial year.