The ICF 2015 Summit in Toronto is all about stories: How innovative cities create amazing cities and job growth in an age of disruption

Education, as practiced for the past millennium, is not particularly productive. Teaching has always been one of those professions, like medicine or music, in which customers vastly prefer quality to productivity. A teacher can effectively teach only so many students … The problem appeared insoluble until 2004, when Salman Khan began tutoring his cousin, Nadia, in math over the Internet….Nadia prospered and soon other relatives and friends sought Khan’s help. So he decided to pre-record tutorials and distribute them on YouTube...The videos turned into a viral hit and attracted enough financial support from donors to let Khan leave the hedge fund. One of his supporters, Microsoft founder Bill Gates, said “It was a good day his wife let him quit his job.” … Today, the Khan Academy has an online library of more than 4,300 videos on elementary and secondary math as well as computer science, biology and other topics...”

Stories. ICF’s Co-Founders recently wrote a book called Brain Gain which is all about stories like the one about “The Day Salman Khan Quit His Job”. That is one of the things that differentiates this book, third in a series by Robert Bell, John G. Jung & Louis Zacharilla from any traditional book on economic development, strategic planning and community development in our cities. Brain Gain explores the most important issues facing cities today - how to attract and retain talented people and secure and retain investment that creates and sustains jobs for the citizens of these cities. By citing stories, Brain Gain becomes an effective teaching tool illustrating Intelligent Communities’ successful relationships and results that might not have been recognized before in concepts or professional presentations. These stories become memorable insights in the way in which communities solved their problems and hopefully inspire others. These stories will also be covered in our next Annual Summit to be held in Toronto in 2015 from June 8 – 12. Come to see and hear the stories…. 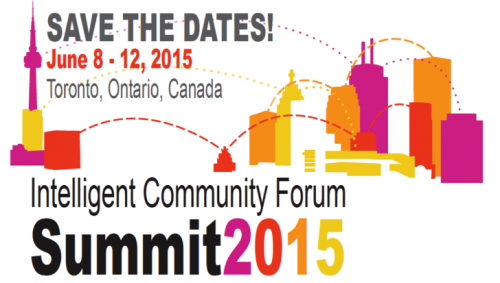 At the Summit we will tell stories about how urban and regional planning in our communities impacts the way people live, work and create in their cities and towns. For instance, on June 8 join the delegation on a site visit to the Waterloo Region, just an hour west of Toronto to hear the story of how this community has been able to weather the storm of Blackberry’s meteoritic decline, only to breathe life into a whole spectrum of new and innovative companies that are thriving in this region, often considered to be Canada’s “Silicon Valley North”, or as the community now prefers to refer to itself as “Quantum Valley” – another amazing story that you will learn about when you visit the Waterloo Region on June 8.

On June 9, learn about the business and economic development opportunities of the delegates attending the Summit in Toronto by participating in a business mash-up, match-making and speed dating session. Every story may be an opportunity that you do not want to miss. Over the next two days learn about how Mayors can save the world, if they were to rule it (no kidding!); hear stories about what is happening in China and India with audacious goals of creating hundreds of smart cities in their countries; and how rural communities are looking at ways to create sustainable communities and level the playing field with their urban cousins through better rural and regional planning and development.

On June 10, hear stories through the Urban and Rural Master Classes about how today’s disruptions in technology, the economy and the environment will only grow more intense and how Intelligent Communities are preparing to leverage the opportunities based on these conditions. Stories will also abound about how the continuing broadband revolution will impact the physical form of Intelligent Communities, the delivery of services in them and the resulting competitive advantages of these communities. Be amazed at the story of how the planning of land-use and infrastructure, sustainability and community development is being done today in new and revolutionary ways – in essence, how it is reinventing what it means to plan.

The next day at the IDEAS Day on June 12, come and be amazed at the applications, new technologies and ideas that are changing the world today and in the near future. Each idea is a new story and could be the next biggest thing or newest application – you will be able to say that you heard the story first at the 2015 ICF Summit in Toronto.

We all know that change is inevitable and that massive disruptive forces of technology are underway. What the ICF Summit, like the book Brain Gain, does is to put these concepts into context and builds on the positive narratives of citizens, leaders and change agents in communities as diverse as Columbus, Toronto and Taipei, homes to large populations exceeding millions of people as well as smaller communities such as Stratford, Pirai and Mitchell, South Dakota, homes to merely thousands of people. These centers, both large and small, have benefitted from the application of connectivity and IT to give their businesses, many of whom are SME’s, a global competitive edge resulting in significant new employment for each of them.

Just as Brain Gain tells compelling stories and provides unique insights about broadband –based cities, towns and villages, the ICF Summit in June will inspire delegates with new ideas and a renewed sense of confidence to go back to their cities to create the best cities and regions possible. Be part of it – register on the new ICF 2015 Summit website: www.icfsummit2015.com.