The Intelligent Community - The Passing of 2B - A conversation with Glen Akins and Colin Garfield of Fort Collins, Colorado

In November, the city of Fort Collins, Colorado passed measure 2B to potentially allow for bonding to build their own municipal fiber network. ICF's Robert Bell spoke with Glen Akins and Colin Garfield from the Fort Collins Citizens Broadband Committee about what this means. 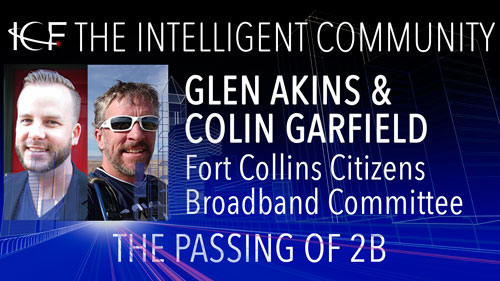 Glen Akins is a twenty-year veteran of the cable television industry. He used to write the security software and design the chips that make cable television set-top boxes, cable modems, and cable modem headend gear work. He has 18 patents and currently designs chips used in enterprise-class wireless access points. Outside of work, he advocates for municipal broadband and rides mountain bikes.

Colin Garfield is a Colorado native and currently lives in Fort Collins, CO. He is a former 12-year GIS cartographer, founder of Broadband & Beers, and campaign lead for the Fort Collins Citizens Broadband Committee. Since June 2016, Colin has been deeply involved with bringing municipal broadband to Fort Collins. He helps connect and educate citizens and policy makers by hosting public events, performing speaking engagements, and managing content over digital platforms. With the historic passing of Broadband Ballot 2B in Fort Collins, Colin is elated by the prospects of municipal broadband across the nation.