There are some interesting developments happening in Winter Park, Florida. Established in the late 1800s as a winter haven for the wealthy of northern states, it is now a city of about 29,000 people in the Orlando metroplex.

Although it has a nice quality of life, relative affluence, other good aspects, etc., like every city, it faces its challenges. What makes it interesting is how the city is responding. 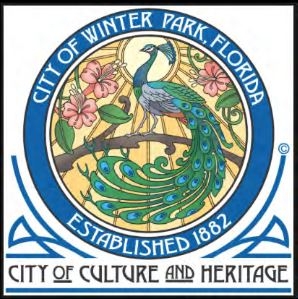 For many years, a significant part of the city felt that their library needed to be replaced and brought into the new century. This effort came closer to reality with the creation of a library facility task force more than a year ago and, more recently, with three workshops in which hundreds of community residents participated.

Needless to say, this is not how the majority of new library building projects go about planning. It is an example of the open and collaborative spirit of ACi Architects, the architecture/urban design firm that the city retained, which is leading this effort. (This is clearly not the exercise in egotism that too many architects practice.)

In my role as a member of the Advisory Group to the Aspen Institute’s Dialogue on Public Libraries, I was invited to talk at one of these workshops about how the changes in the world and libraries provided the basis for Aspen’s report and how that report could inform their own plans for a future library.

Since a good library is very much a part of the fabric of its community, it is especially interesting that the library planning effort has been conducted in parallel with a larger “community visioning” project to provide direction for all of the city for the next 50 years.

While no city will ever achieve 100% agreement on anything, it’s been fascinating to watch these efforts develop with generally civil discussion – and visible in real time online to those who couldn’t be there.

This picture is from one of the breakout groups during a workshop. 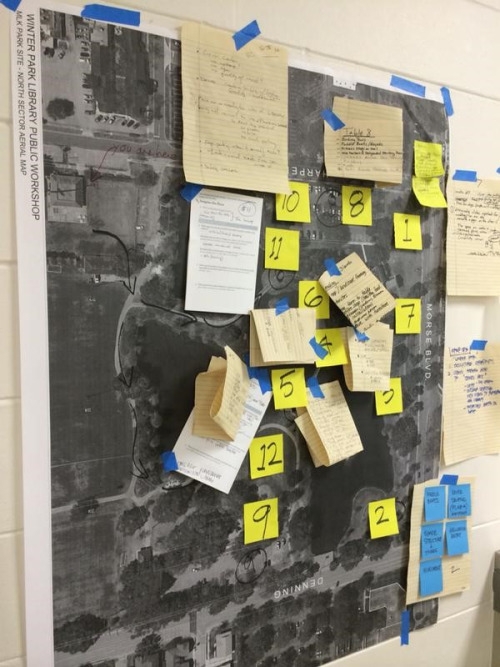 In the case of the library workshops, part of the challenge is that the best site for a new building is in a city park named for Martin Luther King, Jr. and that there is also a need for what has been a civic center (community meeting building). So the design needed is not just for a library building.

While this complicates things, it also presents an opportunity to create something new which combines a new library building and the recreational area around it – an opportunity to create a kind of knowledge park or knowledge experience. The library can offer its services not only inside the building, but on it and beyond in gazebos around the park – and a new civic forum space.

A combination library/park/civic space is not common, but not rare either. Many large libraries sit in parks, most notably the New York Public Library in Bryant Park. But these two public amenities – the library and the park – are not all that often integrated together.

Recently, WIRED Magazine in its design issue article, “8 Cities That Show You What the Future Will Look Like”, featured Medellín’s Biblioteca Espana library/park that is “Combining Libraries and Parks into Safe Spaces for All”, while serving and helping to upgrade the impoverished neighborhood that surrounds it. 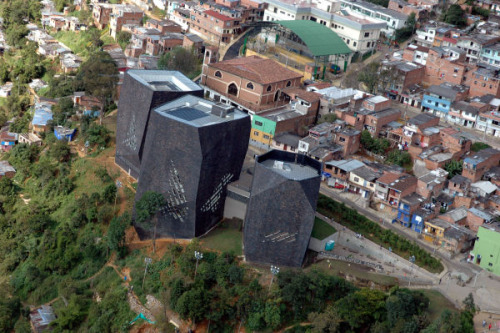 The New World Symphony in Miami Beach provides another model of how a park can be integrated with cultural events inside a building. With a large video wall on the outside, it is a natural place for people to sit or even picnic while listening to great music and seeing great musicians. 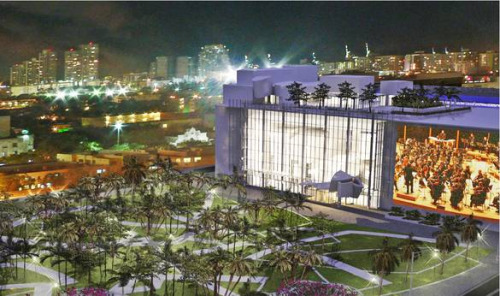 Sometimes the park is jam-packed with listeners. 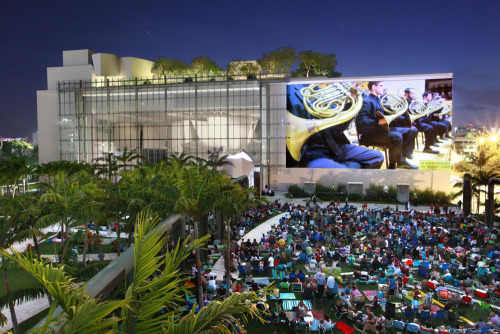 Building a library in a park offers similar possibilities. Even the always necessary garage for a library can be turned into a set of display walls for the projection of knowledge outside of the building – and thus upgrading, perhaps, hiding its parking function. For instance, pictures and text from the city’s African-American history museum could be made more widely available this way.

Although no two cities are exactly the same, Winter Park is a good example of an historic, but relatively small, city that is now striving to re-define itself as part of a larger metropolitan area in a 21st century digital economy. For that reason, I’ll be reporting back on how the residents proceed to set an example for many other places in the USA and the rest of the world.