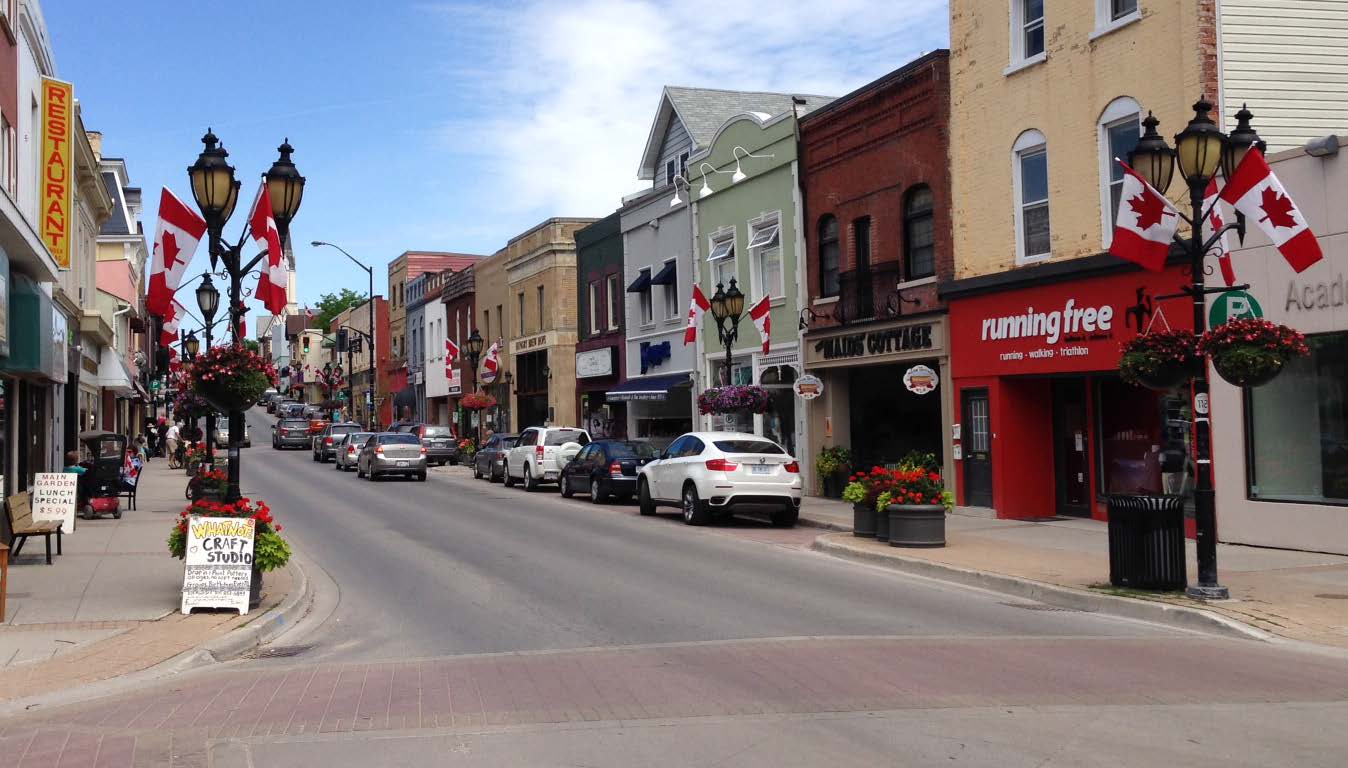 The town of Newmarket was born from revolution – specifically, the one that broke out south of Canada’s border with America in 1775. For members of the Quaker faith there, the patriotic fervor of revolutionary America signaled that a people committed to nonviolence might not be welcome in the new nation. By 1800, Timothy Rogers of Vermont was exploring an area around the Holland River north of Toronto, looking for a new home. Winning a grant for a large amount of land there, several Quaker families soon settled in the area and were joined by others over the next decades.

They chose well. Newmarket was a natural stop on a river route that connected Toronto, on the shores of Lake Ontario, to Lake Simcoe to the north at a time when rivers meant trade and power for industry. The village thrived as a farming community, industrial center and market town. Two centuries later, that same location is just as valuable, though for different reasons.

Toronto, on Newmarket’s southern border, is Canada’s biggest city and top center for business finance, arts and culture. The seat of the Regional Municipality of York, Newmarket serves as a bedroom community to Toronto and benefits from its economic heft. Its local economy prioritizes business and administrative services, the knowledge industries, advanced manufacturing and retail, reflecting the principal drivers of Toronto’s larger economy.

For years, however, this town of 88,000 has worked to build an economic base that can stand on its own as well as benefit from Toronto’s proximity. Because, in the digital economy, the power of location is giving way to the power of intention: the commitment to meet the challenges of change and seize the opportunities it brings.

Newmarket’s agenda for change is built on a foundation of collaboration among local and regional government, business, academia, nonprofits and citizens. This kind of community-led development can be slow – but the gains it achieves last longer than the careers of individual leaders and create institutions that drive progress.

One of those institutions is the Smart City Council. Formed in 2011, it is a team of leaders from government, businesses, universities, colleges, hospitals and citizen groups. Their goal is to develop innovative projects that leverage their combined assets to address new opportunities for the town. They serve as catalysts and connectors to the launch of new projects, champions for their value and cultivators of community engagement. Nearly every Intelligent Community project launched by Newmarket has its origins in the Council.

Create It, Make It

Two projects stand out. CreateIT Now began life as a healthcare incubator where multiple partners would help commercialize new healthcare technologies. It succeeded in that vision, offering advice on business, finance and law as well as high-quality work space and a prototyping facility. Since its launch in 2015, it has served about 40 companies per year with counsel and assistance in winning grant funding. Six have gone on to complete testing of new technology in healthcare settings and win their first customers.

Since launch, however, the model has evolved. Healthcare startups fail in large part because they cannot get access to a healthcare facility until they have a product to sell. CreateIT Now has broken through that barrier with the help of founding partners Southlake Regional Health Center and York University. Their Health Ecosphere Innovation Pipeline program guides the development of personalized healthcare technologies and new enterprise solutions for customizing care with the active involvement of medical staff and testing in the hospital environment. Technologies already emerged from the pipeline are improving procurement with potential savings in the millions, preventing and killing infections in catheters, and empowering patients to self-schedule and manage appointments for complex tests.

The same kind of collaboration led to the launch of NewMakeIt, a makerspace founded in 2016. It offers innovators and entrepreneurs a coworking and fabrication space loaded with equipment, and education programs in skills certification and business. Where CreateIT Now focuses on information technology, NewMakeIt is all about manufacturing. In its first 30 months, it has created 45 new businesses and more than 50 new jobs, with an estimated economic value of C$3.9 million.

Newmarket has an economic development problem shared by countless other communities. Focus groups and surveys have shown that employers have a hard time hiring qualified staff, which stunts their growth, while students are unaware of the companies, industries and careers right in their backyard.

Newmarket is meeting the challenge with a set of events and programs aimed at its young people and developed in cooperation with the chamber of commerce, schools and nonprofits. The latest is the Career Pathways Expo, launched in 2018, which where local businesses and post-secondary schools exhibit and attendees can learn about training opportunities in trades and entrepreneurship. Interactive tools also help students, teachers and parents explore career pathways and learn career opportunities in the region. The Expo joins programs including the Fast Track Student Conference, which focuses on secondary school students who have not registered for higher education, and an ICE Challenge that brings students together in a hackathon environment to solve real-world challenges for local employers. Digital Shift @ Library offers training sessions and workshops on digital skills, while the Ignite Conference helps students develop digital portfolios of their skills, experience and goals for presentation to local entrepreneurs.

Infrastructure for the Digital Age

Newmarket’s prosperity has made it an attractive market for broadband providers – but studies by the town uncovered significant underserved areas and lack of competitive pricing for levels of service. Between 2010 and 2014, studies and planning exercises sparked rising awareness of the importance of broadband to the town’s future, culminating in a digital strategy called Innovate Newmarket. It highlighted the need for a locally owned service that could deliver reliable service and good customer support at competitive prices.

In 2018, the town launched, in partnership with the local electric utility, a company called ENVI Networks. ENVI’s stated mission was “to establish Newmarket as a smart city and intelligent community through a high-speed broadband fiber network.” Construction of the core network was completed by the end of that year. It is launching last-mile connections to customers beginning with municipal, university, schools, hospitals and commercial customers.

Another form of infrastructure became a priority project for the town. Newmarket was one of four municipalities to receive government funding to develop a community energy plan. Working with ABB and Siemens, it chose to focus on a unique requirement: establishing a network of heavy-duty charging stations for all-electric transit buses that use local battery storage to reduce impact on the grid during peak travel hours. In a 2-year trial, the project will deploy 6 electric buses and one charging station along their route to explore how such a system will work and the benefits it will deliver in carbon reduction, which are estimated to be 561 tons of CO2.

The value of the trial extends far beyond the municipal border. The province of Ontario is home to approximately 5,000 transit buses. If a well-publicized trial validates the feasibility, economics and carbon impact of the design, the contribution to air quality and carbon reduction from widespread adoption would be vast. And the contribution to Newmarket’s reputation in the province and the nation would be just as large.

Newmarket is another of the smaller, quieter places in the world that is taking effective steps to seize the opportunities of the digital economy and master its sharp challenges. It is not moving fast and breaking things, not launching the next revolution in how we live. It is creating an Intelligent Community by focusing on problems that matter and bringing the entire community to their solution.

Share on
See other pages related to Smart21 Newmarket