“In theory, there is no difference between theory and practice,” an aerospace engineer once said to me. “But in practice, I find that there often is.”

Those two short sentences sum up a lot of wisdom about the net neutrality debate.

In theory, there should be nothing wrong with allowing content providers like Netflix, YouTube and Yahoo to pay extra to broadband ISPs so that their content ends up in a “fast lane.” Online video is swallowing up an ever-rising percentage of the Internet’s total bandwidth. A fast lane should benefit users, and also the ISPs, which will invest that extra revenue in expanding services and increasing capacity. In theory, everybody wins.

In practice, however, there is high risk that a fast lane for some applications will put everybody else into the slow lane. Dominant ISPs are very happy with their service models: indeed, the US cable TV industry owes its existence today to a farsighted decision in 1988 to found an organization that invented the cable broadband standard called DOCSIS. With so much TV and movie entertainment moving to the Web, can you imagine what their businesses would be like today without broadband? One clear lesson from history is that if companies like their business model, they are not going to change it out of the goodness of their hearts. That’s not how market economies work. 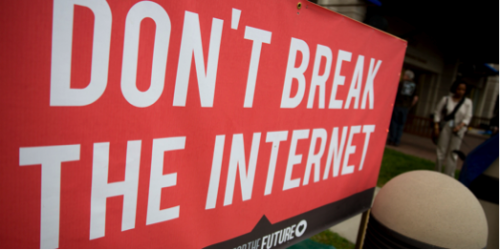 So the proposal of the President and FCC Chairman makes sense. Broadband will be classified under Title II of the Telecom Act as a telecommunications service subject to potentially strict regulations – but will actually be regulated lightly to allow continued innovation. Content providers and ISPs will still make money and users will still get their content, because market demand is such a powerful force.

How do I know I’m right? I don’t. But I think it’s a good bet for two reasons. First, the new net neutrality policy basically continues the policies that have been in place since the Web was commercialized in 1994. Every paying customer has equal access, every service provider pays for its own network and passes along traffic from other networks.

In the past twenty years, the Web has had a revolutionary impact on how we work, shop, build businesses, learn, communicate, raise our children and worship our deities. McKinsey & Co. estimates that it has produced 21% of all economic growth and created 1.2 million jobs in developed economies over the past 15 years. Not bad for a 20-year old invention. Those who want to change to a different model must somehow explain why their model will produce a better outcome for the world than the one we have.

Secondly, broadband really has become a utility essential to modern life. Britain’s Daily Mail surveyed 2000 adults in 2014 and asked them to name the products that have changed their lives the most. Guess what came in first? Broadband. Second? The Internet. Fourth, after the also-useful washing machine? Email. In all, the Internet or Web-based services took 8 of the 30 top spots, along with such 20th Century breakthroughs as the refrigerator, dishwasher and microwave.

At the Intelligent Community Forum, we see the impact of this utility everywhere. We track the progress of cities and regions that are putting it to best use in building their economies, meeting social challenges and enriching their cultures. No theory would have predicted that development back in 1994, when there were only 2,700 Web sites worldwide. But it turns out that, if you give billions of people and organizations a chance to practice with the Internet, they create something of enormous value, whose impact is just beginning to be seen.

About Robert Bell
Robert Bell is co-founder of the Intelligent Community Forum, where he heads its research, analysis and content development activities.
See other pages related to Blog Broadband Robert Bell Net Neutrality
Share on