The Disrupted Find a Voice

There is an intellectual eruption taking place in a tiny corner of the New York publishing world that is a microcosm of the big battle underway for the hearts and minds of people in cities worldwide. As behemoths slide into being with trending names like “Broadband Economy,” “Singularity” and “Gigabit City” to take hold of the economy, our imagination, and then push with increasingly uncomfortable force against the personal destinies of larger and larger numbers of people, places and leaders, the impact of two decades of digital life are being felt. Some call it “disruption” and, having named it think they’ve tamed it and take a seat at the next clichéd seminar. But the words “disoriented and dispossessed” seem more accurate ways to describe what a generation of “smart” risks leaving us with if we are not mindful.

The time is close at hand when the “Smart Cities” fetish will be revolted against, and when the Intelligent Community appears as the only rational balance of opposing forces. While we have more reliable bus schedules and access to the weather – all good if you travel by bus and want to know which jacket to wear, as I do - there remains the perception that something “inhuman” is lurking, which puts at risk everything for which we have committed ourselves in order to energize cities and towns for this century. In my speech in Montreal on Wednesday, I will probe this further.

“Sometimes Satan comes as a man of peace,” sang Bob Dylan. What he meant was clear. Do not be fooled by the appearance of the good, but be mindful of whether what you see and experience really is good, rather than a strong force happening around you.

This is the sentiment suggested in January by Leon Wieseltier, the former literary editor of the New Republic magazine, one of America’s most influential and controversial journals. In an essay called Among the Disrupted he lays out the field of battle and describes the forces in our Internet of Everything or Internet of Nothing societies. His essay has got buzz, and the buzz is eating away at preconceived notions - and is pissing-off some of our tech elite. 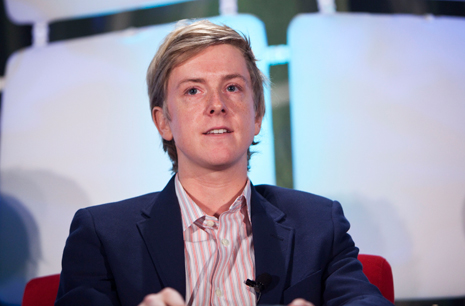 It is filled with counter-trend flourishes. But it was not written as an exercise in literary flourish. It is a meditation against the leadership that Facebook co-founder, Chris Hughes (pictured right), has brought to bear on the magazine since he purchased it in 2012, at the age of 28. As you would expect, Hughes promised to bring it fast forward into the digital age, so that more than 40,000 readers would have access to its bright fireworks of political ideas and global sophistication. Was it weird that a Silicon Valley billionaire would make a move on an insular, old New York cultural institution? Maybe. But increasingly, I find, geeks want “head cred” and realize that language still has power. But the marriage between traditional and digital may have soured when the Literary Editor said after his first meeting with Hughes, “He has no interest in blogging, which sounds like Mozart to me!”

The Facebook co-founder never said he wouldn't use digital tools to find a balance between the literary and the business worlds. After all, this guy invented the fourth largest community of interest on earth. You would expect him to try to find a way to bring scale and profitability to a property for which he had paid handsomely, and which was losing money. And to use social media to do it.

To Wieseltier this was the rub. It is here that the analogy between an obscure Manhattan versus Silicon Valley skirmish articulated my concern. ICF has led a successful fight to conclude the battle of whether broadband is necessary. Since we unpacked this dialogue in Toronto in 1995, hundreds of organizations, conferences and policies have been formed. Good for us. Good for them. Good for our communities. However I think we are all stuck and spinning our wheels on the ice of “Smart.” Are we trying to simply push forward a technology mandate that serves as humanity’s final solution? It is as if we are saying, God is dead and technology is the new deity against which no apostasy must be committed. Or as singer Jimmy Scott wrote, “Heaven is a place where nothing ever happens.”

But something is happening here on earth! As Senator Stephen Conroy of Australia’s controversial NBN learned, people only want technology – or want to pay for it – when they can figure out how it will improve THEIR lives. Giving up a real life for one lived on a small screen damn sure better have sweeter rewards. Does it?

The essay asks this. Wieseltier says that we need to examine the rush to employ language in the digital age and to not ignore the impact or the consequences of thinking fast and living online. He innocently asks the big question: “What does the understanding of media contribute to the understanding of life?”

People scoffed. We accept the relative value and influence of open data and information, but are not sure if it is actually is making us better human beings or improving our lives. We ignore a Stanford University report that said that multi-tasking makes us less productive. We are not ignoring the imposition of robotics on labor, which has made labor less valuable. Families are being split apart not because of race or class, but because the bread-winner cannot win enough bread. The idolization of the great tools of tech have not hammered into being or planned successfully a solution that leads to the most important economic element: human satisfaction. If we look at knowledge as something utilitarian and technology as something to be worshipped, rather than the other way around, we may be missing the key to improving our cities.

So in Montreal I will ask: do we really want to move up the difficult mountain toward “Intelligent?”

Going from “smart” to “Intelligent” is not a small step. It is the Beatles going from Twist and Shout to Sergeant Pepper’s Lonely Hearts Club Band. It is the transformative step that synthesizes creativity, education, morality and the pursuit of bigger truths into the only reliable engine of human production: culture. How the heck does one plan this? How does one overlay digital on top of it? How do you “friend” Intelligent Community? It ain’t easy, but that is where ICF’s head is at 20 years after we launched the movement. As John Jung notes in his blog below, we can will introduce you to a lot of communities that try new approaches to this and are succeeding.

Wieseltier’s cautions are prophetic. “The abusers of humanism,” he writes, referring to those ready to take and store our privacy, “come as emancipators.” He says, “I think we should emancipate ourselves from their emancipations.” Chris Hughes sees it differently. Yet, in his mind, he too comes to do a good thing. He is applying his tools toward the cause, as do you for your communities. But let us not be deaf, to the prophet’s voice. As Dylan said, “Sometimes Satan comes as a man of peace.”