Over the past 100 days the people have spoken. In several important cities they decided to lift their voice and open the exits for several incumbents. New mayors and elected officials were sworn in among several Intelligent Community Forum Foundation cities, including three Intelligent Communities of the Year, Toronto (2014), Taichung (2013) and Taipei (2006). These champions replaced familiar, popular and controversial leaders. The most notable for me was in Taichung, Taiwan. 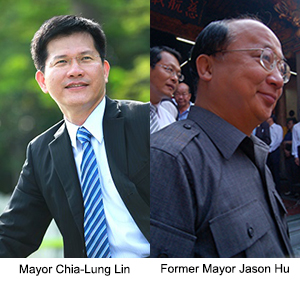 There was a hard-fought campaign which revealed the degree to which democracy has taken root in Taiwan. When the votes were counted, Dr. Jason Hu (Hu Chih-chiang), who had served as mayor since 2000, was narrowly defeated by a former protestor, the youthful Mayor Lin Chia-lung. The new mayor won his office, in part, over issues familiar to most democracies and cities today: a growing economic rift among citizens. In both Taipei, which also elected a new mayor, and Taichung, the cause of the growing disparity is attributed to China’s overinvestment in Taiwan’s real estate industry. This has caused housing values and costs to rise. Beijing’s behavior in Hong Kong and “incumbent fatigue” also fed the insurgency of Mr. Lin.

Mr. Lin assumed office on Christmas Day and comes into office like a tsunami, promising that his “first 100 days” will be used to sweep the city (population 2.7 million) off its feet with honest reform and programs that actually work. He promises to make the trains run on time, after he finishes building the system, which he and many think has taken too long. I have seen it. It will be a model for the world whenever finished. He refers to his first 100 days as “the honeymoon” period. He, like other politicians, seems sure that the first 15 weeks have magical powers to transform even good places - which Taichung certainly is - into even better places, which we hope it to be. I have no reason to doubt his sincerity or that of his transition team, many of whom have been brought in from outside the city for its purgation. I wish him well, and look forward to meeting him, since Taichung is a key Asian member of the ICF Foundation.

I have never been one to interrupt a honeymoon, and think of ICF’s cities as reformers also. But when time allows I want Mayor Lin and the others holding their new brooms to examine the sincerity of their promise to make all things new in only 100 days.

This is a notion that political leaders have embraced. I can only conclude two things if so: 1) That politicians by and large think alike and 2) That they rely on public relations more than is necessary. This stuff is a PR stunt and it is misleading. It is a disservice to citizens and ignores the facts of how progress really occurs. Taichung’s unemployment rate is 4.6% and, among its many economic and social virtues, it has 23 universities connected to industries and giants like Taiwan Semiconductor that continue to make Taiwan an economic marvel. With a new opera house and an emphasis on green development, it fast became a cultural center for the nation.

New mayors and councils know full well that governing is more prose than poetry; more policy than PR. What matters are not the 100 days, but the four-year terms to which they are empowered to serve. As I look through the prism of truly successful communities studied by ICF I know that the success of Intelligent Communities occurs as leaders realize that they are obligated to set in motion intergenerational projects whose results, unfortunately, may be harvested by future councils and mayors. I am not naive. I understand that no one can truly run a campaign promising a better future that will actually come to pass in the Future. But that is a fact and it would be nice to hear someone admit it while campaigning.

The originator of the “100 Days” concept, the American president Franklin Roosevelt, would understand this. He might point out that his actions during the first 100 days of 1933 were not a matter of public relations, but of long-term national survival. In his moment America’s banks had collapsed, its unemployment approached 25%, while communism and facism had become appealing ideas for political reform. The first “100 days” were actually a footrace to save the global economy and to keep its moral center from imploding.

As I was reading Mayor Lin’s bold assertions over my New Year’s holiday, I learned that the former Governor of New York, and a man I admired as a mentor, Mario M. Cuomo, had died. Aside from my father, there was no other man I revered more for his quiet intelligence, mentorship and integrity than Governor Cuomo. He was an aberration in the political world, which was the nature of his appeal. His world view was informed by his ability to not only remember where he came from but also to be profoundly thoughtful and honest in public at all times. He detested dishonesty at any level and always told it precisely as it was. He was elected to three terms.

I am sure that Mayor Lin and others will follow this unique path toward true intelligent leadership.