I’ve written in the May 2014 issue of Urban China magazine and here before about the various ways that life in urban and rural areas is converging.

But when it comes to the economy, especially growing global trade, we often hear of great distinctions between city and countryside. Indeed, it is often assumed that most of any country’s economy can be attributed to its cities and public policy follows that assumption. 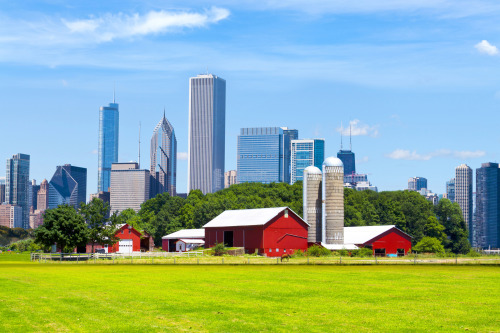 David Brunnen is Managing Editor of Groupe Intellex and Partner of NextGen in the UK. He has had a long and distinguished career as a leader in technology and public policy.

He has been doing some interesting research and concluded that this urban-rural divide is not as great as myth would have it. This culminated in a report in May 2015 with the intriguing title, “Global Trade Development outwith the Metros: not beyond belief”. He also provided something of an executive summary on his blog.

“The notion of growth in international trade from enterprises rooted in our countryside and less-regarded towns may, at first glance, seem unlikely. Scratch the stats however and beneath the glossy megacity headlines you can sniff the fragrance of a less-urban, more rural, renaissance.”

Brunnen points out that part of the myth about the role of cities is a very generous definition of what is a city. As an example, Brunnen cites the work, ending last year, of the RSA City Growth Commission of the UK, whose aim was to “enable England’s major cities to drive growth”.

“Some of these encompass far more places than are recognized by any governmental and administrative boundaries. The South Hampshire Metro area includes two cities (Southampton and Portsmouth) and the entire semi-rural conurbations on both sides of the linking M27 motorway. Their London Metro area extends west well into Hampshire, south to include Gatwick airport, east to include places on both sides of the Thames estuary and north to include Luton airport beyond Bedford. In the debate about building airport capacity for London, it’s a wonder that Birmingham in the West Midlands is not a candidate.” 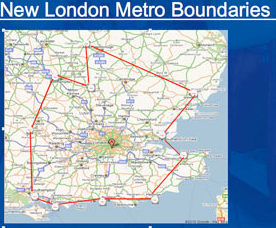 This is one newspaper’s view of the London Metro area five years ago.

Brunnen goes on to note:

“Not surprisingly, with these broad definitions of their City Regions, the RSA City Growth Commission suggest that Metros contribute 61% of UK economic growth. Ask ordinary people whether or not they live in a major city and the map would be very different – in fact it would be perfectly possible to conclude that economic growth is far more evenly spread with only around 50% of growth generated within those megacity places that demand such intensive management.”

But this is not just a story about England. There are similar situations in many other countries, including the US.

A few years ago, Wendell Cox of Demographia, an international public policy firm, wrote “America is More Small Town than We Think”. He starts with the statement we’ve often heard:

“America has become an overwhelmingly metropolitan nation. According to the 2000 census, more than 80 percent of the nation’s population resided in one of the 350 combined metropolitan statistical areas.”

According to the census, the figure was 79.0% in 2000 and is now 80.7%. Moreover, the official definition of urban is not limited to obvious big cities like New York City. Some of that urban population lives in what the Census Bureau calls urban clusters, whose population is between 2,500 and 50,000.

“America is more “small town” than we often think, particularly in how we govern ourselves. In 2000, slightly more than one-half of the nation’s population lived in jurisdictions — cities, towns, boroughs, villages and townships — with fewer than 25,000 people or in rural areas. Planners and geographers might see regions as mega-units, but in fact, they are usually composed of many small towns and a far smaller number of larger cities. Indeed, among the metropolitan areas with more than one million residents in 2000, the average sized city, town, borough, village or township had a population of little more than 20,000.”

The 2012 survey by the Census found more or less the same results. If anything there were more governments. Many metropolitan areas are more networks of small towns than one master urban jurisdiction.

Brunnen goes on to explain why those outside the big cities are able to participate so vigorously in global trade.

“Dig deeper still into life beyond Metros and you’ll find a diverse and complex fabric of connections and capabilities – with very different channels and enablers for international trade.

“These less-regarded places are familiar with making do without much, if any, external intervention (or interference) from their national or regional governments. ‘Just Do It’ … This inbred capacity for action plus our newfound ability to network ideas and contacts without the hassle of travel points towards a greater levelling up of opportunity.”

That story has often been drowned out by reports of resurgent cities and ever declining rural areas. The big city governments of the world have drawn most of the attention from big corporations and governments — perhaps it is easier to sell to or deal with very big municipal organizations?

I’d suggest reading the rest of his report, for the policies — which are both innovative and pragmatic —that he proposes to encourage economic growth.

The bottom line of all this: the sharp dividing lines between rural and urban are not really all that sharp. That calls for a better balance across geographic areas. A nation’s strategy for its economic future, its infrastructure investments, broadband and technology needs to reflect the real distribution of the population and the potential of all areas to contribute to growth.