Last night I saw something I have not seen since I returned to New York City: two couples, presumably old enough to have been vaccinated, strolling quietly along Third Avenue late at night, masked-up, returning from a restaurant to their apartments. They were animated and sounded even cheerful! This was the same Third Avenue where in June I had witnessed demonstrations and battles with police that had the feel of revolution and a society in tatters. But broken glass and anger do not typically end cities. We adjusted. We asked why. We developed vaccines and strategies. Including an examination of our police.

This is not to report that life is back to normal or even that good here. But it seems better. As vaccines go into arms at local drug stores at accelerated rates, the statistics remain daunting for the economy. Over 10,000 businesses were vaporized. 50,000 hotel rooms are vanished and will no longer will be available to the 65 million tourists who are not back yet. Restaurants until only a few days ago had fewer customers than the average gas station restroom on the New York State Thruway. That is the good news, because our theaters and performance halls and spaces are still dark. 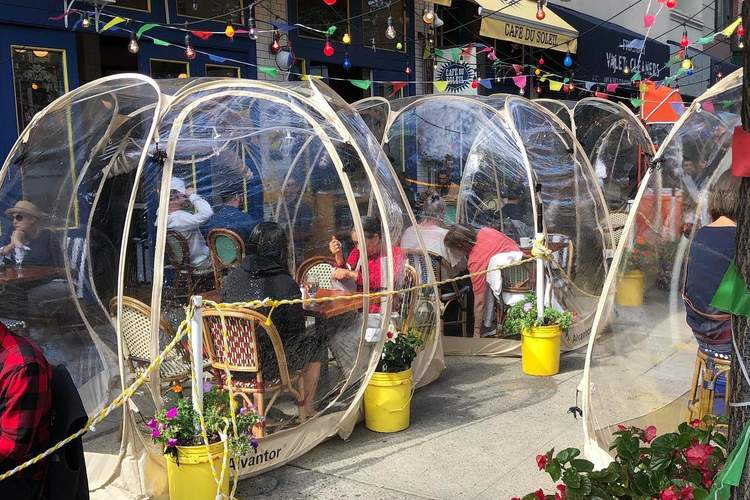 NYC is battling to regain control of its quality of life one year after the first COVID death on March 14th. Policing is also being challenged.

Mercifully for many, Zoom and connectivity have taken their victory lap. But what has the virus done to the civic institutions that bind us? Restaurants have been trying to lure plague-drained customers with the appeal of outdoor, heated cubicles. Individual booths have been built like Quonset huts and have been given permission to reach out onto the avenues and streets. You can sit with your scarf and coat on and enjoy Manhattan’s finest dining in 23-degree F weather! I have not gone out to eat since last March since I am not vaccinated, and the idea of being served by someone who, with their mask or helmet, appears ready to perform dental surgery messes with my appetite. The cubicles are a cross between a sausage stand at a street fair and a shrunken geodesic dome. Some are nicer than others. Our choice has been to order from different restaurants most nights of the week, pick-up our meal on foot and leave a generous tip to the people I have known for decades. It is appreciated, and it is therapeutic to talk to the owners and hear their stories.

It was depressing at first.

The virus is receding and our civic DNA seems well intact. Our merchants keep battling to keep their businesses alive in a city where, since the Dutch colonized it centuries ago, commerce has been king.

Back to those couples

Four successful-looking people on the streets of Manhattan late at night, strolling and laughing, is not something I would have thought unusual or heartwarming 12 months ago. In my neighborhood, restaurants are ritualistic, tribal meeting places. The stroll home in the cool late winter air, when you do not have on a mask, is as refreshing as a good argument. To see people walking and talking again, even if only in a glimpse, made me choke with gratitude.

A few days before Christmas a Yahoo! Finance reporter wrote, “COVID-19 lockdowns and advances in remote technology are prompting many New Yorkers to reconsider life in the Big Apple – and those with means are relocating to lower-cost havens like Florida. Near-empty streets and office buildings and deteriorating quality of life issues have people invoking a cult classic movie, “Escape from New York.”

The concern among most of us was not that 10 million people will go to “lower cost havens.” Or even that the fear of density would not go away.

I would say the primary concern is that the quality of life here has taken a broadside that may not be reclaimable, especially in public safety. If those who run our cities and towns are elected to do anything it is to pick up the garbage, provide public health and, most important, ensure public safety. Intelligent Communities are focused obsessively on quality of life. It is the attractor for places that make the digital transformation and methodically grow their economy with a knowledge work force.

Thus policing well is essential. And what police forces do as they manage the persistent plagues of homelessness and drug infusions, which have become entwined with crime, is a major quality of life issue that will resurface as the virus waits for its next opportunity.

It is a topic we are now taking on in a series of podcasts titled, “Policing the Intelligent Community.”

Episode One with Stratford, Canada Mayor Dan Mathieson has dropped. We are recording others with police and thought leaders in Canada and around our Intelligent Community global neighborhood. If you want to be involved or sponsor the episodes, please contact Matt Owen at [email protected]