An Excerpt of Brain Gain 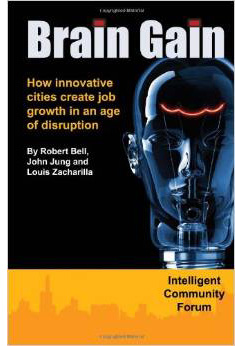 Middle-skilled jobs are the foundation on which local, regional and national economies rest. In the European Union, medium-skilled jobs made up about 50% of the total in 2010, comparable to 48% of total American jobs in 2006.

These middle-skilled jobs generally require some education and training beyond high school but less than a bachelor’s degree. It may be an associate’s degree from a community college or certificate from a technical school. It may be on-the-job training, previous work experience or just some years at university that did not result in a diploma. Middle-skilled workers are construction supervisors, electricians and plumbers, office administrators, technical salespeople, medical technicians and dental hygienists, telecom equipment installers, welders and first responders.

If middle-skilled jobs are indeed being “wiped off the table” by innovation in information and communications technology, it poses a terrible threat to the economic and social well-being of communities around the world. If rising incomes are highly concentrated in 1-2% of the population while the rest of us get poorer, the developed nations of the world will come to bear a startling resemblance to those chaotic countries at the bottom of the income ladder, where despots or oligarchies control most assets and everyone else lives off their table scraps.

If you make a forecast and want to make certain it is dead wrong, there is one guaranteed method: take a trend from today and draw it out for five or ten years in a straight line. Societies, cultures and communities adapt. The high rate of technology change today may be challenging that adaptability, but the story is far from over. Job polarization is clearly happening – but is it a crisis? The slow decline in middle-skilled knowledge-based jobs – those that do not require a physical presence in a particular location – is inevitable. It was inevitable in manufacturing as soon as the first automated machinery was put into place, which is why those Luddites in 19th Century England who destroyed automated looms knew just what they were doing, though they did not do themselves any good. As the Industrial Revolution continues in digital form, we are increasingly capable of automating jobs that require not just a strong back but a bit of knowledge and judgment as well. So we are doing it. We may well want government to have a policy response, but the best that laws and regulations can do is to cushion change while job markets adapt.

There is another change, however, that has gone little noticed until recently but which is every bit as profound:

We have come to expect more from our businesses without noticing the ramifications it has on the skill sets needed to perform these jobs. We want goods and services faster, at cost-effective prices, and with improved customer service. Today’s delivery person confirms orders and shipments of goods using a tablet; the shelf stocker no longer places stickers on products, but rather uses a complex personal digital assistant device to control stock supplies; and your local coffee shop barista not only serves your coffee, but is also expected to troubleshoot the WiFi. These new responsibilities are no longer the exceptions, but rather the rule. The direct result of companies keeping pace with technological advancements has meant that positions previously requiring low skills now demand solid digital skills: the ability to access, use and interpret digital information in the workplace.

In this view, the really big change is not our increasing ability to automate away routine middle-skill jobs. The really big change is in those non-routine, manual, menial occupations that are traditionally considered low-skilled. The authors of a report called Menial is Menial No More put it this way: in the past, for entry level jobs in the hospitality industry, “workers only needed to show up at a hotel seeking work, and as long as they were responsible and reliable, they were fit for the job. Today workers must independently complete an online application process before they are even considered for an interview. At one hotel chain all staff must pass an online customer service course, while another chain requires all cleaning staff to operate a PDA.”

The US Bureau of Labor estimates that the number of total jobs for middle-skilled people will grow 11% from 2006 to 2016, while those for high-skilled individuals will grow 15% and those for low-skilled will grow only 8%. The availability of jobs for the truly unskilled is likely to see an even more severe decline than the forecasters say.

Innovation is the core of the economy you live in, and is being fueled by ICT as a fire is transformed into an inferno by a rush of oxygen. Innovation is becoming almost exclusively a game for the skilled, who can add value to everything they touch during the workday. If you accept those ideas, then you can appreciate the need to ensure that your community experiences “brain gain” rather than “brain drain.” In this complex century, we face so many challenges, from the economic and financial to the social and environmental, that we are all tempted to stand stunned, like the proverbial deer in the headlights, while doom rushes down upon us. Life forces us to choose which challenges we will give our attention to. For the future of the local community, no issue is of greater importance than making sure you are on the right side of the gain/drain divide.

Share on
See other pages related to Brain Gain