In early April, I was in the city of Winnipeg in the Canadian Midwest. There I got a lesson in the construction of ladders. Not the kind of ladder on which I make the dangerous climb to clean out my gutters. The kind that helps people of all ages to access opportunity.

One set of ladders can be found at Sisler High School. Located in a lower-income neighborhood, the school was one of the worst in the city three decades ago but has been turned around by a long-tenured and innovative staff. The singular focus of education at Sisler is on ensuring that students are ready for the next step after high school. It teaches the normal secondary curriculum with extensive arts, music and drama offerings. But it began focusing seriously on technology six years ago and has seen that technology, in the words of their principal, “utterly transform pedagogy.”

Like a lot of good high schools, Sisler has a digital media department that teaches design, animation, coding, game design and moviemaking. But how many high school programs bring in teachers from the Vancouver Film School, live and online, or teach that film school how to use live streaming to reach students in 40 countries? How many run a videoconferencing program that connects its students with executives of Dreamworks and Industrial Light & Magic, or with surgeons performing live surgeries or environmentalists in Africa trying to protect land? At Sisler, it is just another day in digital paradise. 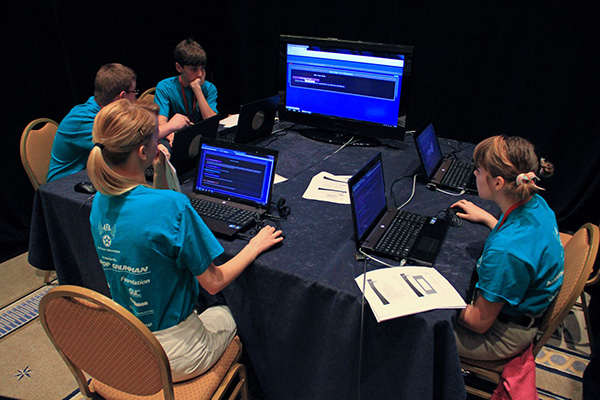 Most schools I visit have been proud to show off their digital media classes. But that’s where digital starts and ends. At Sisler, automotive classes teach students how to use the computerized diagnostics systems that working mechanics use. An in-depth curriculum teaches basic and advanced cybersecurity, from protecting individual computers to corporate-level networks. They are able to do it because the school raised a half million dollars from the private and public sectors to create a virtual enterprise network for the students to work on. Every year, the school sends a team to compete in the CyberPatriot competition hosted by the US Air Force Association. For the past three years, the Sisler team has brought home top prizes among 3,500 schools.

Impressive, right? This is a city of 660,000 located far from Silicon Valley, Silicon Alley or Cambridge. But the truly remarkable thing is how Winnipeg’s educational institutions are linked by virtual ladders. Sisler has long-standing partnerships with Red River College, the University of Winnipeg and the University of Manitoba that give its seniors access to post-secondary programs. In turn, Sisler sends its students into the elementary grades to offer digital media workshops. A recent competition for 4th graders attracted a senior executive of Electronic Arts to serve as judge.

The genuine partnership among these institutions is based on a shared vision: that integrating the marketplace into education gives students the inspiration to go further in their education and their working lives. They are offering, not just an education, but a ladder of opportunity for students that runs from the upper elementary grades to graduate education.

The ladder doesn’t stop there, either. In my next post, I will take you up to the next rungs, where learning truly becomes a gateway to life.