Collaboration vs. Competition For Economic Growth

Lots of talk about the economy focuses on how individual businesses compete. Generalizing from the situation of individual businesses, public officials who are responsible for the overall growth of their local economy also often talk about competition. Making their cities “competitive in the world economy” or enabling their “residents to compete" are frequent phrases you hear. 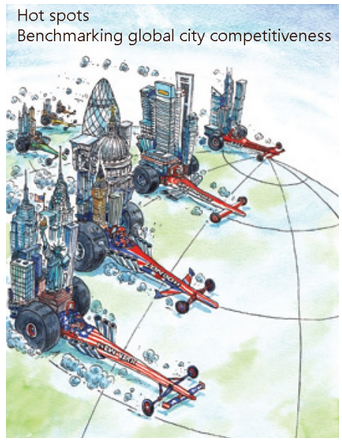 And they worry about where they stand in the competition with other cities.

Even in today’s global economy, the biggest cities still envision themselves as standing alone, in competition with all other jurisdictions.

And, of course, with cash, tax and other incentives, local economic development officials will try to steal – i.e., compete – with distant or even nearby jurisdictions.

Granted that sometimes the word “competitive” is used merely to mean prosperous or good or something else positive. But the use of the metaphor of competition can be misleading, even in those cases.

The fact that individual businesses often find themselves competing with each other doesn’t mean that regions as a whole thrive by focusing on competition with other regions.

Getting back to basics, an economy grows as people develop and exchange specialized services/products and, in various ways, create new ideas and services/products. The better connected and more collaborative the residents of a region are with everyone else, the more likely they are to be creating more wealth and income for themselves. This means that overall economic growth of a region is much more about collaboration than competition.

The value of collaboration has begun to be heard in some parts of the economic development profession. For example, John Jung, Chairman of the Intelligent Community Forum (ICF), wrote “Collaborative Innovation – the New Competitive Edge for Economic Development”. From a conference on Global Competition and Collaboration in 2011, there was “New Building Blocks for Jobs and Economic Growth”. The Wharton School at the University of Pennsylvania affirmed this idea: “We Need More Collaboration And Less Competition For Economic Growth”.

Unfortunately, most of the huge global cities have not yet seriously adopted this approach. In contrast, an increasing number of smaller cities, towns and rural areas have come to the realization that they have a better future if they cooperate, collaborate and network. 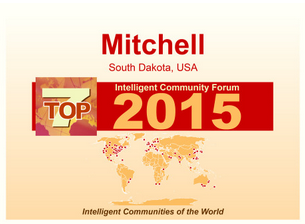 An interesting example is Mitchell, South Dakota, which has 15,000 people, but was among ICF’s Top 7 Most Intelligent Communities this year — among cities like Rio, New Taipei and Columbus Ohio. They were in trouble a decade ago. They had lost 30% of their population, especially young people, like many other small communities in the countryside.

Mitchell turned that situation around. They have three Internet service providers that deliver gigabit bandwidth. They’ve seen the growth of tech companies and precision agriculture. Their unemployment rate is 3%, with hundreds of open jobs. Unusual for a small city, it has its own workforce development director.

At the recent ICF Summit in Toronto, Bryan Hisel, Executive Director, Mitchell Area Development Corporation, put it simply: “entrepreneurship is our way of thinking here.” So the leaders of Mitchell view their small size as an advantage, not a disadvantage. That entrepreneurial culture of its people came before they had broadband.

With that entrepreneurial spirit, you’d think that Mitchel is all about the competition. But Hisel pointed out that all the things people elsewhere have started to talk about — especially collaboration — comes naturally to small communities. So Mitchell has extended its service to nearby communities and even provides advice to small cities that others might see as competitors.

Perhaps the tradition of collaboration in parts of the countryside is also why there was increased interest at the summit in my proposal for a global virtual metropolis that connects small cities like Mitchell – a connection for economic success that arises from collaboration rather than competition with one another.