In 1980, I was invited to join the Commonwealth Study Conference which brought together 300 of the world’s most promising emerging leaders from business, government, institutions, labor, and others from across civil society in every Commonwealth country. The Commonwealth Study Conference was founded in 1956 in the UK by HRH The Duke of Edinburgh, Prince Philip. It was, in his words “an extraordinary experiment” set out to examine the relationship between industry and the community around it. The purpose was to challenge the participants’ assumptions and preconceptions and to give them the chance to examine real situations and issues arising from the interaction of businesses, their employees, and the communities in which they operated. In essence, it was an opportunity to see all facets of these communities and their interrelationships.

At that time, I was a young 29-year-old urban planner and urban designer in Toronto. During our travels across Canada over a three-week period we were encouraged to debate, listen to new perspectives in every city we visited and become exposed to new and unique experiences so that the quality and relevance of our decision-making as future leaders could be improved.

During these three weeks, the Duke of Edinburgh guided us through this extraordinary experience. To benefit from these unique experiences and to bond as an international group, 20 teams of 15 diverse members from across the Commonwealth traveled together across Canada to learn about the interrelationships between government, business, institutions, and their citizens and how to potentially make their lives and environment better. Similar to the idea behind the triple helix, which members of the ICF communities promote today, we met with communities as diverse as remote logging camps in northern British Columbia, indigenous communities, and communities dependent on specific industries. I was especially honored to be able to experience a side-trip to northern British Columbia at which time I was invited to a private dinner with the Duke. He wanted to discuss urban planning issues with me. We discussed issues on his mind, including the impact of high-density developments, citing demolition of the Pruitt-Igoe apartments in St. Louis as an example of the failure of planning for high-density at the time. We discussed the ideas behind good and bad density, but we also discussed the conservation movement in the UK, the importance of the World Wildlife movement (which he headed) and other areas of current urban planning thought in Europe and North America. We also shared some thoughts about our families and the importance of the sense of community. For me, the dinner, and subsequent conversations with him, then and in future years when we met again in Canada, reinforced in me the need to look holistically as a planner and designer and later as an economic developer. But more importantly, it helped to inspire and inform my thinking around aspects of what would later become the principles that we, at the Intelligent Community Forum, aspire to and promote around the world.

This day allowed me to reflect on the importance of the combined wisdom and the values that thought leaders shared with me and my peers and partners over the years - helping to form the layers of wisdom that we carry with us over the decades. My partners and I at the Intelligent Community Forum have had the fortunate opportunity to meet mayors, leaders of industry, heads of institutions and even presidents, prime ministers, and royalty over the years. We presented at, and participated in, events of international importance such as speaking at the Noble Prize Awards, at APEC, World Economic Forums, TED Talks, and even at our own ICF Global Summits. But it was these private moments, when we were honored to be able to share ideas and experiences with people who have thought deeply about things that mattered to them and to the world around them, that we remember their words and ideas the most. Prince Philip taught me the value of looking holistically; but I also learned from many others that I was fortunate to meet: Stephen Hawking and other scientists taught me the value of science; Bill Gates and Warren Buffett taught me to look for opportunities and the consequences of inaction over the long term; Willem-Alexander, King of the Netherlands, taught me about the value of partnerships; the Governor General of Canada, David Johnston, taught me the value of education and talent; the President of Taiwan, Ma Ying-jeou, encouraged us to create a global membership organization of our ICF member communities; former Vice President Gore taught me about sustainability and to recognize how everything in the environment is connected; and among many others over the years, former President Obama taught me about hope.

The collective wisdom of these and other thought leaders over the years helped to form the layers of my ideas and values. Hopefully, I have been able to successfully share and influence others over the years as a result. Soon after I returned from my travels with the Duke of Edinburgh, I worked on several community-minded initiatives, both as a planner and urban designer for the City of Toronto, but also in my private life. I eventually became involved with the World Trade Centers and later I became a senior member of one its offshoots, the World Teleport Association. Through these experiences, I was fortunate to meet and partner with my fellow Co-Founders of the Intelligent Community Forum, Robert Bell, and Louis Zacharilla in New York City. Our varied and collective wisdom and experiences came together at a moment in time when science and industry was at the beginning of a communications revolution, but its impact was still to be experienced in municipalities around the world. Consequently, we were among the first to address this revolution on the global stage. As a result of our individual and collective global experiences, the principles which ICF today calls the ICF Method, was formed. We have shared these ideals and values forward to municipalities and its leaders and citizens for more than two decades. Many of these communities around the world absorbed these principles which they have called smart city and intelligent communities plans and strategies. Through our workshops, keynote speeches, books and ICF Awards program, they have been shared as best practices around the world, inspiring hundreds and thousands of other cities towns and regions to become better communities for their citizens and families.

As I watched the amazing pageantry of the funeral for the Duke of Edinburgh today and listened to the many testimonials from people around the world, reflecting on how the Queen’s consort found a way to share his unique insights and wisdom from his nearly 100 years, I recognized his contribution to the values and ideas that I took forward in the decades since our connection back in 1980. Prince Philip was patron of some 800 organizations, particularly focused on the environment, industry, sport, and education. His leadership influenced thousands of future leaders to be mindful of everything around them and how it impacted and benefitted the sense of community. As he said in a speech to the Australian Conservation Foundation in Canberra in 1970, “…it may well turn out that money spent on proper pollution control, urban and rural planning, and the control of exploitation of wild stocks of plants or animals on land and in the sea, is the less expensive alternative in the long run... The conservation of nature, the proper care for the human environment and a general concern for the long-term future of the whole of our planet are absolutely vital if future generations are to have a chance to enjoy their existence on this earth.” This is clearly part of our holistic approach to ICF’s sense of what makes up our successful intelligent communities. May he rest in peace.

John with Warren Buffet, left; and with the Vice-President of Taiwan, Lai Ching-te in Taipei, right.

John signing a partnership MOU with Eindhoven Mayor Rob van Gijzel in the presence of the King of The Netherlands, Willem-Alexander, and Queen Maxima, left; John with Polish President Bronisław Komorowski and Canadian Governor General David Johnston in Warsaw, right. 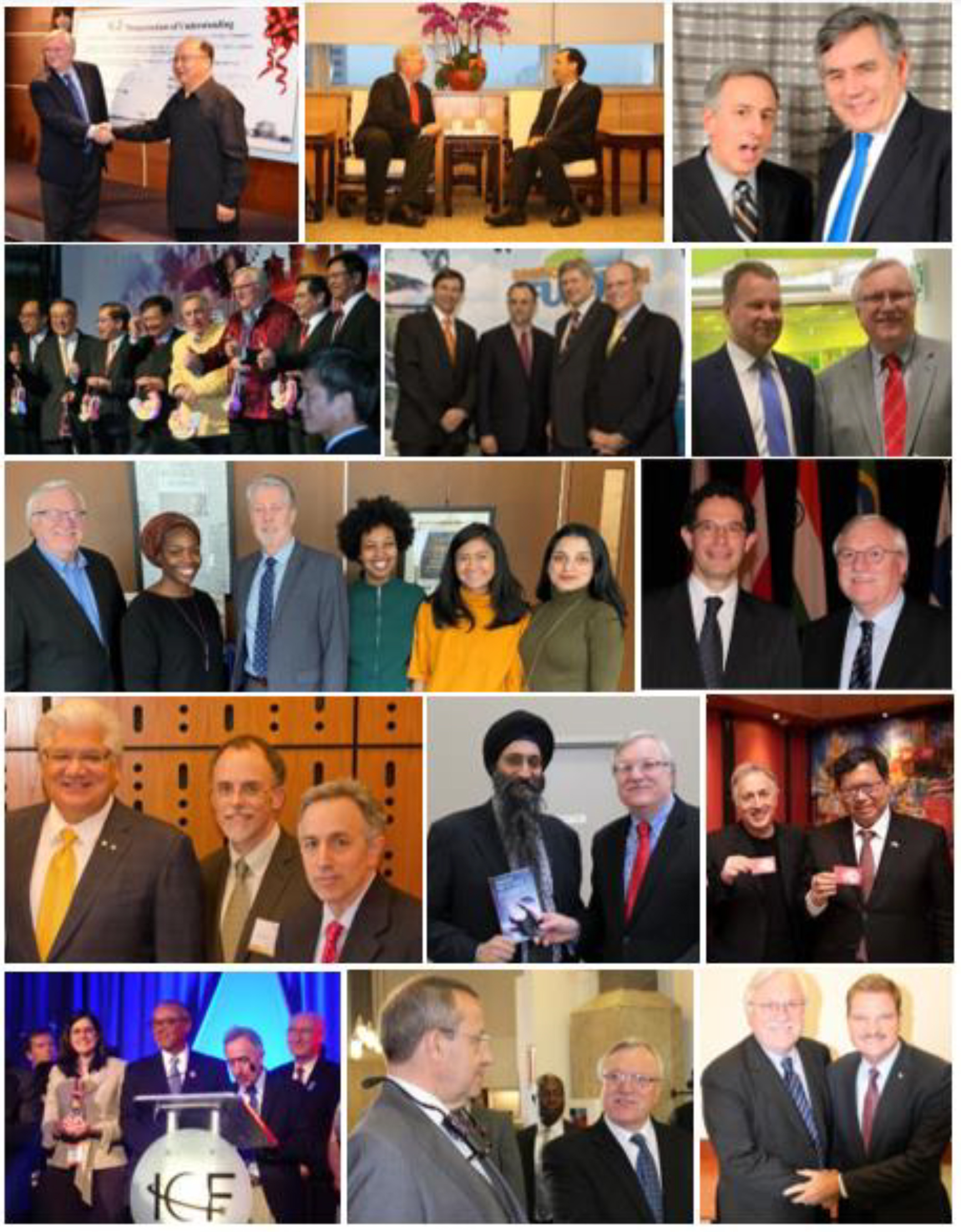