Every day now, the migrants flow north by the thousands from the arc of chaos on the Mediterranean’s southern shore. Their fearful, inspiring stories grip the world and confront the nations of the European Union with yet another challenge to unity.

Whether to let the migrants in, whether to let them leave, where and how to distribute them, how generously to meet them – these are fundamental questions of policy and humanity. One answer comes from the German and Austrian citizens who flock to train and bus stations bearing food and clothing, calling out greetings to exhausted travelers. They challenge us all to find the compassion hidden in our hearts. They remind us of the many times a stranger helped us without being asked. 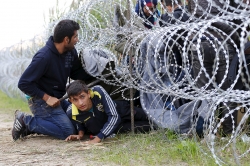 Yet in all of the news coverage of this immense human drama, there is one bit of reporting I have yet to see. Everyone is worrying about costs and burden-sharing. Everyone fears social tensions and the rise of hate crimes targeting immigrants. The missing story is about the future wealth and economic growth the immigrants are bringing with them.

Migration is a powerful force in our global economy. In our book, Brain Gain, we looked at the research on its economic impact. Are immigrants a drain on the public purse? America’s National Research Council says no. It found that the average immigrant contributes about US$80,000 more in taxes over a lifetime than he or she receives in public services.

Do immigrants threaten our prosperity? Hardly. By increasing the supply of labor, they boost growth. The UK’s Centre for Economics and Business Research concluded in 2013 that immigration from the EU contributes £20 billion (US$33 billion) to the British economy. In New York City, where I work, the ten neighborhoods with the greatest concentration of immigrants have stronger economic growth than the rest of the city.

Do immigrants bring crime and disorder? A 2012 study by the Pew Research Center found exactly the opposite. In Los Angeles, as just one example, immigrant youth are less involved in crime and violence than their native-born peers.

We reap what we sow. Rapid immigration brings real problems, but also big benefits. Your city or region gets to choose which will dominate. If you treat migrants like criminals, shove them into ghettos and deny them opportunity, you get the problems. If you find ways to accept them and manage the real issues and problems they bring, your community stands to gain new economic energy and a richer and more diverse society.

That is why the sight of ordinary people in train and bus stations across Germany and Austria welcoming migrants is so inspiring. Community intelligence is not really a matter of digits and devices – it is the willingness to accept what is new and unknown, and the wisdom to try making the best of it.

About Robert Bell
Robert Bell is co-founder of the Intelligent Community Forum, where he heads its research, analysis and content development activities.
See other pages related to Blog Robert Bell Immigration
Share on