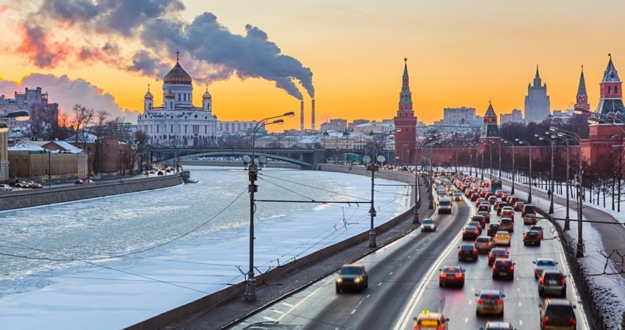 First you fill out an online application.  In theory, that should be more efficient than the paper kind, but it is filled with questions offering cryptic possible replies.  What kind of visitor am I: tourist, guest, business, consular, official?  It asks for personal details – parents and spouses, what countries I have visited – that seem to be none of their (legitimate) business.  Then you go to the visa office where you are told you filled it out wrong but they can fix it for you for a fee.  You pay the fee.

In all fairness, I don’t know what my government’s Consular Service puts Russians through.  In general, I find that the nations whose visa processes are the most annoying are those whose citizens have the hardest time getting into the US.

But back to Moscow.  In 2010, the city elected a new mayor, Sergey Sobyanin, who had a new idea: how about if the government of the city worked to make Moscow a better place instead of, you know, the opposite?  One of his early decisions was to centralize all IT spending in a single department. Previously, each government department and agency had its own IT staff: the result was Balkanized systems, no overall visibility into operations and considerable waste.  According to the impressive CIO, Artem Ermolaev (pictured right with Deputy CIO Andrey Belozerov), the first three years of his job were a nightmare: making the case that it was eco­nomical to centralize operations, keeping the Mayor convinced to proceed over the objec­tions of those losing power over decision-making – and of course, delivering on the promises he made. The years of effort, however, have paid off in better services, greater visibility, and transparency.

The citizens of Moscow are online in a serious way.  Out of population of 12 million, the city’s website has 6 million active users. Each of 200 online services – from sending a child to school to applying for a gun permit – is heavily used, so that the average citizen interacts with the system multiple times per week. In addition to serving citizens online, the city is turning to “push” services that deliver greater value with less input.  An example is renewal of driving licenses: instead of going to the motor vehicle department and standing in line (or getting a ticket for driving with an expired license), you receive an email alert from the system when your license is coming up for renewal.  All forms are automatically completed for you online, giving you a chance to update any infor­mation.  Your only non-digital responsibility is to have your picture taken at the motor vehicle office and to pick up your new license.

The IT department also runs the systems underlying 660 health clinics that serve 300,000 Muscovites daily. The system captures and manages every part of the service delivery process: appointments, scheduling, patient visits, tests and outcomes.  Each physician is tracked on keeping appointments, ordering tests, patient outcomes and even patient feedback.  This information contributes to decisions on compensation – which gives IT a lot of clout.

The department is even responsible for economic development. The city contracts for services – from software development to network deployment – rather than building infrastructure whenever possible.  Moscow has the biggest CCTV system in the world.  To connect all those cameras, it required connectivity providers to invest in their own infrastructure and sell transport services to the city.  With an anchor tenant in place, the service providers gained excess capacity to provide commercial and residential voice, video and data.  The IT department demonstrated that this model has a lower total cost of ownership (TCO) than building and maintaining the infrastructure themselves, which won over the Mayor. It also helped deliver 99% broadband availability over optical fiber, they say, and a 90% adoption rate.

If your mental picture of Moscow dates from before 2010, it’s time to revise your thinking.  This is an Intelligent Community, make no mistake.  Oh, and Foreign Ministry?  Mr. Ermolaev is awaiting your call.

About Robert Bell
Robert Bell is co-founder of the Intelligent Community Forum, where he heads its research, analysis and content development activities.
See other pages related to Blog Robert Bell Moscow
Share on