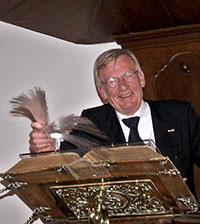 Kees Rovers spent the first 20 years of his professional life in senior management positions with the Dutch cooperative bank, Rabobank. In 1985, he left the bank to found Telematica International, which operates call centers and provides enterprise telephony services to major Dutch banks, the Dutch travel industry and retail sectors. The company also introduced the French Minitel system into the Netherlands.

In the early 2000s, he partnered with the director of the local housing corporation in his home village of Neunen in the Eindhoven region to change the way in which citizens own and access communications services. Kees realised that, in particular, elderly and disabled people could use advanced digital services (through a high-speed fiber network) to enable them to have more control of their lives, maintain their independence in their own homes and enhance their quality of life. In 2002, he set up a ‘user feedback committee’ to explore the needs and benefits for the different organizations and interest groups in the town, from churches to schools and other stakeholders. In 2004, this work led to the founding of Ons Net (“Our Net” in English), a cooperative that within five months succeeded in connecting 8,000 households (a 97% take-up rate) to a community-owned fiber network.

He founded Close the Gap to bring the technology and community development roadmap pioneered in Neunen to villages, cities and regions throughout Europe. Close the Gap advises on and assists communities in the Netherlands and internationally on the creation of their own fiber cooperative and connected community. More information can be found at www.closethegap.nl.

Kees is a frequent speaker around the world on the Close the Gap cooperative model and was recently awarded a knighthood by Her Majesty Queen Beatrix for, in particular, his founding of Ons Net Neunen.

Share on
See other pages related to Kees Rovers