The hype for 5G at the Mobile World Congress (MWC) 2017 in Barcelona from February 27- March 2 was so thick it was palpable:

“Sir, do you realize that this is a revolution that will have a great impact on economies and in the quality of our everyday lives?”

“Excuse me Mister, but did you know that 5G will enable brand new services and things that have not been possible before?”

“Hello, can I offer you an Espresso? By the way, while commercialisation of 5G is not expected to start before 2020, our company is pushing other companies and governments to standardise norms for a smooth transition to 5G use worldwide. Is that with or without sugar?”

From 5G automated Jaguar cars to the promise at next year's 2018 Pyeongchang Winter Olympics where South Korea's KT mobile operator says it will engage tech savvy participants to enjoy their first holistic 5G experience, telecom firms clearly are racing to be the first on the block with 5G. Some are betting that 5G won’t be commercially available until at least 3-5 years from now, although some whisper that aggressive U.S. and South Korean firms are competing to get something out to customers by next year. Such intrigue. Can’t wait! 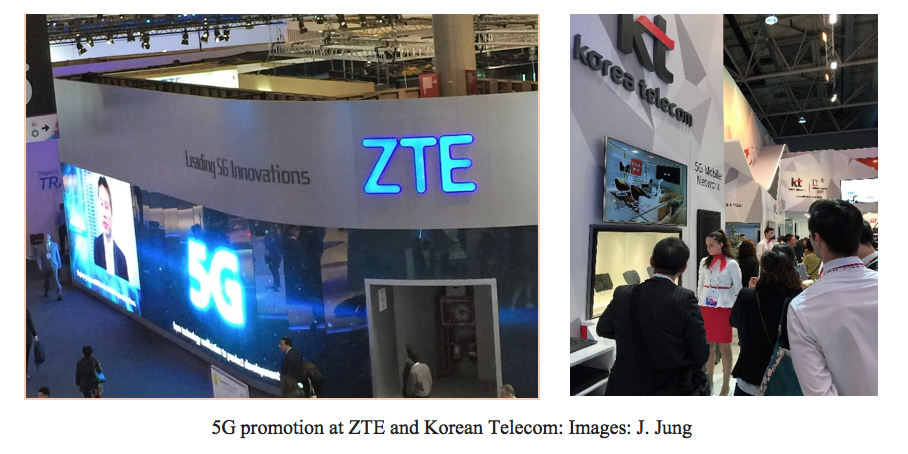 Fifth generation mobile networks were also on the lips of every Internet of Things (IoT) promoter and autonomous driving advocates as 5G is expected to enable lightning-quick downloads 1000 times faster than today’s 4G capabilities and help guide driverless cars by instantaneous multiple connections within a city’s traffic ecosystem. This was also the case at stands promoting digital health applications from wearables such Fitbit and Sony watches to scanning devices and other sensors to aid the old and easily confused, like me, at this event where they needed traffic flow monitors to assist in the movement of crowds of people traveling between booths and halls at MWC. Another evolutionary event this year was Virtual Reality with companies such as HTC’s Vive and Samsung’s VR roller-coaster ride attracting hundreds to their booths. Everything was considered life-altering and the next big, big thing, but speak to people experiencing the VR demonstrations, and you thought you already were in the year 2020.

Granted, with 5G speeds promising to be 1,000 times faster than the 4G in my hands at the moment, the latest in mobile technology is exciting, especially at an event that attracts nearly 110,000 attendees in Barcelona every year. The buzz, euphoria and physical traffic of tens of thousands of people between halls at this event belies the myth that the likes of the Crystal Palace was dead. No way. And at registration prices in the thousands of dollars per person (sorry, no sharing!), the entry price is not keeping them away at the door. 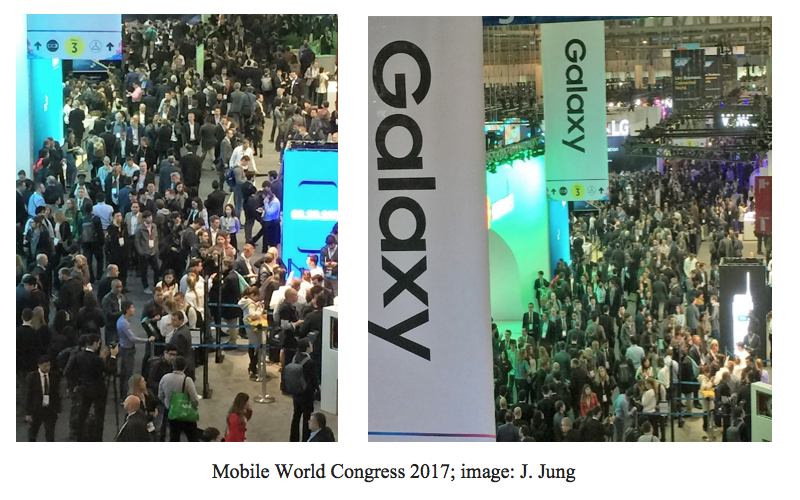 According to many attendees, Mobile World Congress in Barcelona is now the place to come to for the latest and greatest news about the mobile world. Not from the Internet nor from the media. In many cases, the exhibits were buildings, not booths. At 110,000 new citizens, it might even count as a new city, at least temporarily. Customers, agents and curious reporters will enter vast rooms with walls and ceilings around them, hiding from the passing delegates not blessed with this special privileged access, to witness the first showing of the new Samsung tablets, the latest Google concoction or gain access to the elite C-level executives at Huawei, ZTE and Siemens, among others.

With your pass scanned at every turn, you were screened as either eligible to pass to view the next level of gadgets, speak to their business developers or asked to upgrade your pass, at a cost, to hear their select speakers at the Congress, such as Reed Hastings, Founder and CEO of NETFLIX, Ted Livingston, Founder & CEO of KIK, and Chang-Gyu Hwang, the Chairman and CEO of KT CORPORATION. Chrystal Palace, it ain’t, but the excitement of physically seeing, meeting and discovering these new things is probably the same.

Congratulations to GSMA, the organizers of MWC and their Innovation City initiative at the event. It was an experience worth going to. But I was there on behalf of ICF and ICF Canada, speaking at an event associated with Mobile World, with a slightly different twist. Instead of unveiling a new app or bathing in a virtual sea of 5G, we were discussing the impacts of all this new technology, good and bad, as we move toward an IoT world, enhanced by the future of 5G. What is the digital world doing to advance humanity? Attendees were interested in the evolution of smart cities where municipalities are partnering with tech companies to build a more efficient and cost-effective city that runs better. But they were also interested in communities that have the governance, champions and leadership to leverage this competitive advantage to attract and retain investment, innovation and talent, which are the key ingredients for a successful Intelligent Community.

Imagine, a world as soon as 2020, where 5G will be commercially ubiquitous. Finally, you will be able to receive your Netflix video in the furthest depths of a subway; you will be able to download and upload your latest heavy data projects 1000 times faster than today, anywhere and at anytime; and you will have the confidence of letting go of your steering wheel in your semi-autonomous car in real traffic as you eat your lunch in the driver’s seat. Some aspects of this new adventure in creating a better quality of life in your community will be more valuable than others, but clearly these are baby-steps in understanding what a more ubiquitous digital society will be all about.

Unlike the commercial discussions of the MWC, our presentations covered a world that is susceptible to being hacked, legal obstacles in a digitized world, as well as the opportunities about to emerge in a world that will have significant changes through advances in technology and community-wide acceptance of the promise of autonomous vehicles, artificial intelligence and robotics. Conference attendees of course were also aware that this transformation will not come easy. With it comes disruption and the impacts on lost jobs, lost dreams and the loss of pride for those who do not make the transformation at the same speed as the advances of technology. Keeping up with the technology is not easy, but is becoming mandatory. That is also why in some cases, broadband and related technologies have become an essential utility; and in some enlightened parts of the world, a human right. Equitable access to education and to affordable advanced technology, such as high speed broadband, are economic levelers that in some places are politically motivated, may be limited by geography or at the economic and business decision of service providers in a region. But in some cases, where adventurous champions and entrepreneurs are present, communities have taken it upon themselves to be self-reliant and establish their own innovative networks, smart initiatives and advanced intelligent communities programs. People want to hear these stories; learn the details through evidence-based data; become inspired that they too can achieve this transformation if they only try; and by understanding the best practices and case studies of others that have gone on before them, that they too might be able to have the insights to be able to make the decisions necessary for their communities to be globally competitive and to be able to attract and retain jobs and investment in their communities.

These are the stories that ICF and its ICF Nations and Institutes tell everyday. It is through these best practices and case studies that many communities become inspired and make decisions to advance their communities. Many are no-name communities and some are even located in the middle of nowhere, such as Stratford, Ontario; Ipswich, Queensland; and Mitchell, South Dakota. But each of these believed in themselves enough to become the little communities that thought they could, and eventually did transform, to become better places that their citizens now fully enjoy and can effectively raise their families in and call home.