In addition to the all-day workshops for large urban jurisdictions and smaller cities/towns/rural areas, all of Friday was devoted to Ideas Day – with a slew of presentations sharing novel approaches to local government and planning.

On Thursday, capping his successful 16 year run as mayor as he retires, Mayor Michael Coleman proudly accepted the award to Columbus, Ohio as the world’s most Intelligent Community this year.

(You can see the full agenda at icfsummit2015.com. The presentations, including mine, will be available on intelligentcommunity.org in the coming weeks.)

One of the other highlights of the week was the keynote speech by David Johnston, the Governor General of Canada spoke on June 10th. Before that, he was the President of the University Of Waterloo, Canada’s premier engineering school.

Since it was established in the late 1950s, it has become the cradle for a thriving tech innovation community – Blackberry being one if the best known examples. In part, for this reason, he was part of the team in the City of Waterloo who succeeded in being named the most Intelligent Community of the year in 2007.

He attributed its success to two policies that stand in contrast with the way that many universities try to contain the fruits of innovation within their campuses – thus actually diminishing their innovation.

The first policy is that the university makes no intellectual property claims on the research done by faculty, researchers or students. Instead they encourage them to commercialize their research and reap the rewards for themselves and the community.

The second policy requires coop education of all students. Each year, every student spends two trimesters in class and one working in a company (for pay) to apply what they’ve learned.

Finally, it’s worth noting that all of this – the need for innovation, the changes in ways in communities have to plan – is not happening in a vacuum.

To provide some urgency to these discussions and in case you don’t realize how fast things are changing in what are still the early days of the Internet, Rob McCann, President of ClearCable, gave an interesting presentation on the growth of Internet usage — increasing roughly 50% per year. (He also made a strong case for the involvement of local government in building out broadband networks, especially in less dense, more rural areas.) 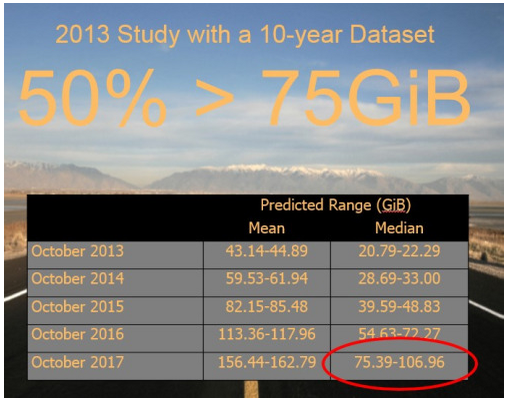