Looking Forward: Getting Us Closer?

When we look at the adoption of new technologies, there often seem to be two simultaneous divergent trends. The innovators and early adopters push the technology forward, making significant progress every year. The laggards still find many reasons not to use the technology.

The current state of videoconferencing provides a very strong example of this divergence.

The obstacles to widespread adoption of videoconferencing in the past included:

Nevertheless, the technology is moving forward with some interesting results.

Using through-the-screen-camera and a holographic illusion, DVETelepresence has worked to make videoconferences appear more natural to participants. This picture is one of my favorites. You’ll notice that to enhance the illusion they even embed the office plant on both sides of the screen, as if it really is to the side of the people who are remote.

Last week, 4Dpresence, a spinoff of DVETelepresence, announced the availability of their “holographic town hall” for political candidates and issues. Taking a page from India’s Prime Minister, who used videoconferences to appear all over that country during their last election, this company is offering to host candidates who can appear as if they are live holograms and interact with audiences. The company claims:

“In live venues, the patented holographic augmented reality podium is so bright the candidates appear more compelling than actually being there in person. The candidates and citizens engage each other naturally as if they are together in person.”

Personify offers what they call “Video Conversation, With a Hint of Teleportation”. The idea is to eliminate the background that an Intel RealSense 3D camera or a Primesense Carmine 3D cameravideo camera is picking up so that you and the people you’re talking to all seem to share the same virtual space.

Another version of teleportation for videoconferencing was featured a few months ago in a Wall St. Journal article titled “The Future of Remote Work Feels Like Teleportation: Virtual-reality headsets, 3-D cameras help make videoconferencing immersive.” As its author wrote:

“I have experienced the future of remote work, and it feels a lot like teleportation. Whether I was in a conference room studded with monitors, on a video-chat system that leverages 3-D cameras, or strapped into a virtual-reality headset inhabiting the body of a robot, I kept having the same feeling over and over again: I was there — where collaboration needed to happen.”

The article focused especially on the use of virtual reality gear to achieve this effect. There is DORA from the University of Pennsylvania, in which a person uses the VR headset to see through the eyes of a mobile robot.

This month’s MIT Technology Review also highlighted the use of Microsoft’s Room Alive in an article titled “Can Augmented Reality Make Remote Communication Feel More Intimate? A Microsoft Research study uses augmented reality to project a life-size person into a room with you, perching them in an empty seat.” 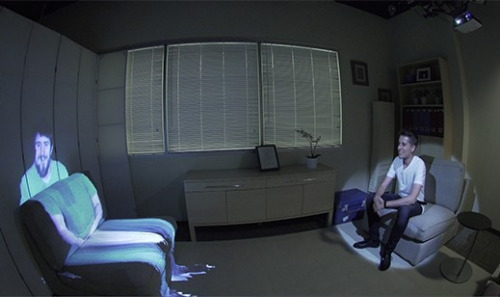 Eventually, as the technology gets ever more interesting and intimate, some fraction of the laggards may finally adopt the new technology. Although as Max Planck noted about scientific progress, the adoption pattern may just be generational: “A new scientific truth does not triumph by convincing its opponents and making them see the light, but rather because its opponents eventually die, and a new generation grows up that is familiar with it.”

So it’s interesting that “47% of US teens use video chat including Skype, Oovoo, Facetime and Omegle.”

In the meantime, the early adopters are getting all the economic and intellectual benefits that can only occur with the full communication that videoconferencing provides and texting/emails don’t. These people are literally seeing the real potential of global Internet communications and will likely reap the economic gains from realizing that potential.