So I thought it especially interesting that the NTCA–The Rural Broadband Association yesterday hosted a policy meeting in the US Capitol that was titled: “Beyond Rural Walls: Identifying Impacts and Interdependencies Among Rural and Urban Spaces”.

I was there for the panel discussion, along with Professor Sharon Strover of the College of Communication at University of Texas in Austin and Professor Charles Fluharty of the Department of Health Management and Policy at the University of Iowa (who is also the CEO of the Rural Policy Research Institute).

We covered the changing demographics and ambiguities in the boundaries between urban and rural, broadband deployment and adoption, and how to measure both the interdependencies between these areas as well as the impact of broadband communications. Perhaps there were too many knotty issues for one morning!

Since the NTCA will be making available further information about this, I’m now just going to highlight my own observations.

There are many examples of rural communities using broadband in innovative and intelligent ways. One example is the work of the counties in Appalachian Kentucky, one of the poorest parts of the US.

But most of these communities don’t know about each other, which means that each has to re-invent the wheel instead of learning from others’ experience and experiments. That’s one reason ICF is planning a global virtual summit for these communities.

The limited distribution of this news also encourages major national/global philanthropic foundations to give up hope for rural areas in the US. Dr. Fluharty noted that less than five percent of philanthropy goes to American rural areas, although twenty percent of the population lives there.

He also emphasized that doing something about rural broadband and development is a national issue, not something to be merely dealt with locally. He even classified it as a national security issue because the countryside holds so much of the country’s critical resources – our food, not the least.

The problem is that for many national leaders, especially members of Congress, the mental image of the countryside is of past decline and abandonment. The national media reinforce that image. So they may feel it’s a hopeless problem and/or have no idea what might be happening that ought to be encouraged.

Many of our current national leaders also have forgotten the common understanding of the founders of the USA that a large country would only succeed if it was brought together. That’s why building postal roads is one of the few specific responsibilities given to Congress in the constitution. It’s why the Erie Canal was built, the Land Grant colleges, etc. We seem to have forgotten what led to our success. In this century, physical roads aren’t enough. Digital communications are just as important.

Of course, not all public officials are oblivious. There was a keynote by Lisa Mensah, Under Secretary for Rural Development of the US Department of Agriculture.

Representative Bill Johnson (Republican of Ohio’s 6th District) opened the conference with a statement about the importance of rural broadband for urban economies. Senator Al Franken of Minnesota closed the conference by saying he viewed rural broadband in the same way people viewed rural electrification decades ago – a basic necessity and common right of the American people. Or, as he said “A no-brainer”.

Along with these misperceptions on the part of media, national officials and foundations is the failure to recognize the increasing integration of rural and urban areas. The boundaries are getting fuzzy.

Even residence is no longer clear. There are an increasing number of people – especially knowledge workers and creative folks – who may spend 3-4 days a week in a city and 3-4 days a week in the countryside. They may contact you, via broadband Internet, and you won’t know which location they’re in. Are they rural residents or urban residents or is that an increasingly meaningless question?

Finally, in the question-and-answer part of the conference, one of the many operators of rural communications companies there pointed out that they know how to deploy broadband and run it, but that their communities need help figuring out what to do with it. Of course, that provided me an opportunity to discuss ICF’s accelerator program and workshops that help community leaders do exactly that. 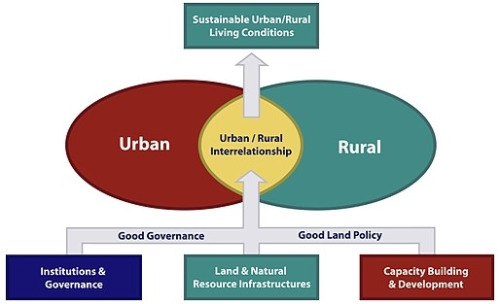