In 1884 Van Gogh depicted the potato farmers of the southern Netherlands turning soil by hand.

Today, things are different. Dutch farmers are still growing potatoes, and there is still open land. But the people in and around the small city of Eersel are creating a new kind of rural – the modern countryside. 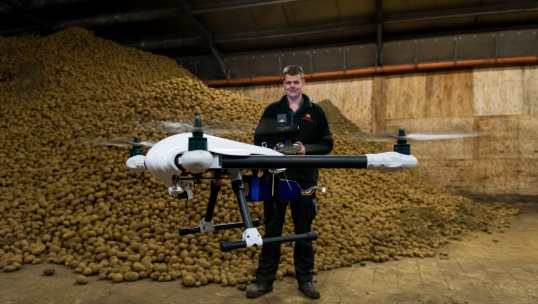 Taking me on a tour of this region last month was Kees Rovers, a noted telecommunications entrepreneur and speaker on the impact of the Internet. Years ago he was a leader in bringing a high speed fiber network to the nearby city of Nuenen (where Van Gogh lived for a while 130 years ago). Now Rovers is working on bringing fiber networks to the area around Eersel.

Eesel is located in the province of Noord-Brahant, a region that receives an unusually large number ofresearch patents, perhaps partly – but not only – due to the presence of Philips research labs in the city of Eindhoven.

This culture of innovation gets a boost from inventive residents and leaders. Three of these leaders joined us for our tour: Eersel Mayor Anja Thijs-Rademakers, City Manager and Alderman Harrie Timmermans and Alderman Liesbeth Sjouw.

We saw three great examples of the modern countryside.

First, there’s the van der Aa family farm, which has invested in robotics – robots for milking the cows and robots to clear the barn of the manure the cows produce in great quantity. Think of a bigger, smarter, more necessary version of the Roomba.

Then we visited Vencomatic, which was created by a local entrepreneur but is now a global business, still based in the countryside. In addition to pioneering animal-friendly technology for the poultry industry, their headquarters won the award as “Europe’s most sustainable commercial building.”

The final stop was at Jacob Van Den Borne’s potato farm in Reusel. He described his use of four drones, numerous sensors deep in the ground, analytics and scientific experiments to increase quality and production on the land. He has a two minute video about precision agriculture.

This is the kind of potato farmer that Van Gogh could never have imagined.

But farmer Van Den Borne and other innovators in the region may be hitting a limit. Slow Internet connections outside densely populated villages are holding them back. Van Den Borne, for example, needs a faster connection to analyze the data he uses to manage his potato farm and to learn new methods of farming.

Van Gogh painted this work on potato farmers while living in the southern Netherlands in 1884. There’s still countryside in the region, but the technology has come a long way in the last 130 years.So Van Den Borne has helped organize a co-operative to build out broadband in the countryside that doesn’t have connectivity yet. Then he can take his innovations to a whole new level.

And that’s why Rovers and the City of Eersel are deploying broadband away from the town center, using the motto “Close the Gap.” (Mr. Rovers is also the founder and director of the NGO of the same name.)

Whether it’s just an unusually strong regional culture of innovation or the historical necessity of being creative in rural areas, where you can’t just pay someone down the block to solve your problems, this region of the world sets a good example. And that, in part, is what motivates organizations like the Intelligent Community Forum, where I work, to promote a new, connected countryside everywhere.