Six Funerals and a Wedding: Highlights from the Summit 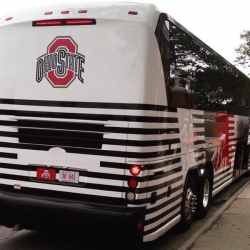 When I heard that they were rumbling into Canada on a big “Buckeye” bus, the same one used by the university’s American-style football team, I thought to myself, “Either the delegation from Columbus, Ohio is very confident, or they are afraid of flying.” Neither was the case, since the delegation was mainly there to learn, to network and, of course, to represent themselves as one of the world’s Top7 Intelligent Communities of the Year. In the end, however, our Jury and researchers decided that Columbus had enough of the right stuff to accumulate the points needed to push it upward, after several tries, to Intelligent Community of the Year. The city with the “inner go” earned the right to go back home in that bus as the 2015 Intelligent Community of the Year. They did it their way, proving again, as I said in an interview in their city in April, that no one is fast enough to run away from who they really are.

Their stage celebration was true and a pure joy to witness. While their Mayor, Michael Coleman, told them that they had earned the right to show more “swagger” (confidence) because of this, they remained humbled by their achievement. They sent me this email message as they departed the great city of Toronto en route back to Columbus:

“We are honored. We are humbled. And most importantly we are grateful. Grateful for your recognition, hospitality, and all the encouragement you have been giving us over the years! It is a true privilege to be a part of this prestigious alumni club. When we started this journey, we did not do it for the accolades. Mayor Coleman and his administration did what we needed to do for the awesome residents of COLUMBUS and for the city we all love and that we call home. Thank you, we are still celebrating on the bus as I type these words. O-H.......I-O!” (Moez Chabbouni)

Another Summit is now part of ICF history. This one was special. It was the first time we had taken our show on the road and left MY home, New York, for another town. Despite early anxieties about receiving an award outside of New York, which somehow made it less valuable, Toronto was really nothing more than ICF’s second home. In fact, it was the reigning Intelligent Community of the Year and in my view, a snapshot of the city of the future. New York? Well, to quote blogger David Colon, “It is Taylor Swift’s city now.” Seemingly “populated with humans raised in the Times Square Bubba Group Shrimp Company, then let into the world with only a penthouse apartment, an Amex black card and leopard-print Prada luggage.” Canada would be a more representable place for us. It was. Delegates had a chance to also visit Waterloo, the 2007 recipient of the award, which blew them away - as we knew it would. Toronto was no stranger to ICF. It was the site of Smart’95, where this all began for us 20 years ago when John Jung convinced us that, yes, there really was a marriage pending between telecommunications and economic development in the world’s cities. A movement was born and a marriage was made.

Walking into the Arcadian on Thursday night, where the Awards were given, some said that the place looked like a room where you could get married. Marriages are celebratory affairs, and the Top7 proved themselves to be the real winners yet again. They charmed the audience. Those “six funerals” we refer to are nothing but the brief frustration of six winners losing a close game in a final seconds of the match, if you need a sports analogy. They are remembered for their greatness and contribution to a global dialogue.

My favorite highlights included Mitchell, South Dakota’s video; the ebullient Far Eastern Group’s Strategist, Madame Lan Yuh, who not only welcomed the Top7 as the sponsoring organization’s representative, but also let people know that fun is the one thing money cannot buy! (But it can pay for the wine….) 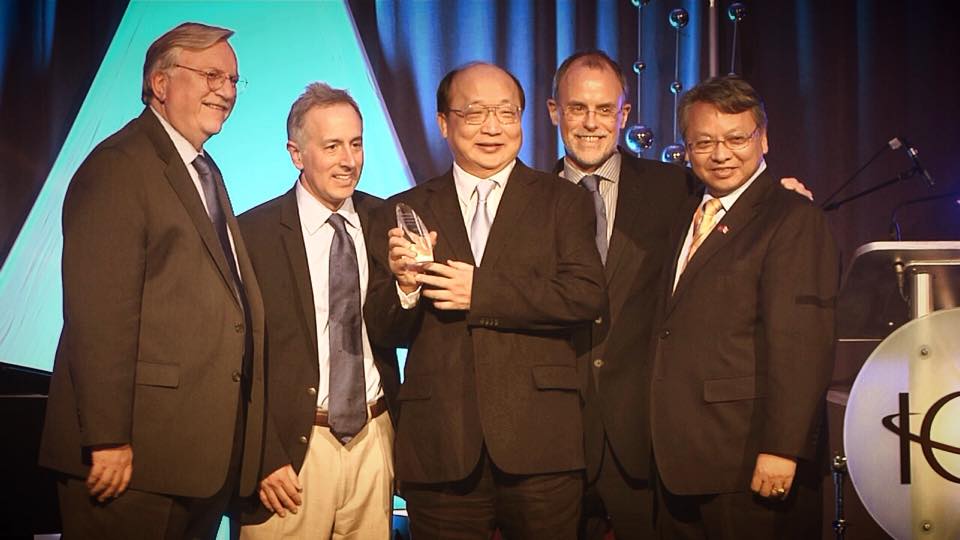 The next night, there appeared on the stage of the Arcadian the great man, Dr. Jason Hu. His Visionary of the Year keynote address could have been written by Jon Stewart’s people had it not included a chronicle of the transformation of Taichung from a “no-name” city in unassuming Taiwan, to a place which is clearly miles ahead of dozens of cities with more brand recognition. With Taiwan’s Economic Cultural Office ambassador, Bruce Linghu, and our 2014 Visionary of the Year, Suneet Singh Tuli standing nearby, he said that the evening represented, “One of Taiwan’s grandest moments.” Coming back at you, Dr Hu. It was one of ICF’s as well. The appearance of the Canadian nation’s Governor-General needs no further reporting here. David Johnston’s career as a university president led us to a better understanding of the power of knowledge to move us from smart to Intelligent. In simple human terms, he demonstrated what that means yet again.

Along with John and Robert, I am cherishing the tie that Toronto gave me. (I only wear ties representing our 17 Intelligent Communities of the Year, Manhattan-fashionable or not!). Columbus now owes me one but I do not need it to tell their story of how to overcome decline and to pull together a community that is poised to bring us back to the place we call “home.”