When It Comes to Broadband, Millennials Vote with Their Feet

By Dr. Roberto Gallardo, Robert Bell and Dr. Norman Jacknis. This article is republished from the Daily Yonder.

Cities are the future and the countryside is doomed, as far as population growth, jobs, culture and lifestyle are concerned. Right?

Certainly, that is the mainstream view expressed by two analysts from Brookings in an article titled “In 2017, Rural Places Won a Little more, But Will It Last?” Their conclusion? Not likely. “Many of the industries that added jobs in rural communities in 2017 – such as logging, mining, oil and gas, and construction – remain cyclical given economic and commodity trends…The types of physical and rote jobs prevalent in rural America remain disproportionately vulnerable to automation and globalization.” 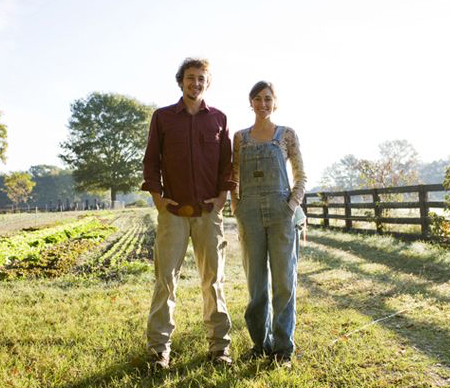 What is interesting about their list is its complete dismissal of a digital economy in the countryside.

Yet as the digital age continues to unfold, conversations around the impacts it has and will have on the socioeconomic landscape intensify. On one hand, one camp argues that the digital age is as prone to clustering as the industrial age was. Digital will deepen and accelerate the competitive advantage that cities have always had in the economy. On the other hand, other pundits and researchers argue that the digital age will result in a “decentralization” and a more leveling playing field between urban and rural. Digital technologies are insensitive to location and distance and potentially offer workers a much greater range of opportunities than ever before.

The real question is whether such decline is inevitable or if the digital economy has characteristics that are already starting to write a different story. We have recently completed research that suggests it is.

While metro areas still capture the majority of new jobs and population gains, there is some anecdotal evidence pointing in a different direction. Consider a CBS article that notes how, due to high housing costs, horrible traffic, and terrible work-life balances, Bend Oregon is seeing an influx of teleworkers from Silicon Valley. The New York Times has reported on the sudden influx of escapees from the Valley that is transforming Reno, Nevada – for good or ill, it is not yet clear.

Likewise, a Fortune article argued that “millennials are about to leave cities in droves” and the Telegraph mentioned “there is a great exodus going on from cities” in addition to Time magazine reporting that the millennial population of certain U.S. cities has peaked.

Why millennials? Well, dubbed the first digital native generation, their migration patterns could indicate the beginning of a digital age-related decentralization.

An Age-Based Look at Population Patterns

In search of insight, we looked at population change among the three generations that make up the entire country’s workforce: Millennials, Generation X, and Baby Boomers.

In addition to looking at generations, we used the Office of Management core-based typology to control by county type (metro, small city, and rural) as well as their digital divide index (DDI) score.

The DDI developed by the Purdue Center for Regional Development, ranges from zero to one hundred where a higher score indicates a higher digital divide and includes two components: broadband infrastructure/adoption and socioeconomic characteristics known to impact technology adoption.

Looking at overall trends, it does look like the digital age is not having a decentralization effect. To the contrary. According to EMSI data, the U.S. added 19.4 million jobs between 2010 and 2016. Of these, 94.6 percent took place in metropolitan counties compared to only 1.6 percent in rural counties.

As far as population, virtually the entire growth in population of 14.4 million between 2010 and 2016 took place in metropolitan counties according to the Census Bureau. Figure 1 shows the total population change overall and by generation and county type. As expected, baby boomers are shrinking across all county types while millennials and Generation x are growing only in metro counties. 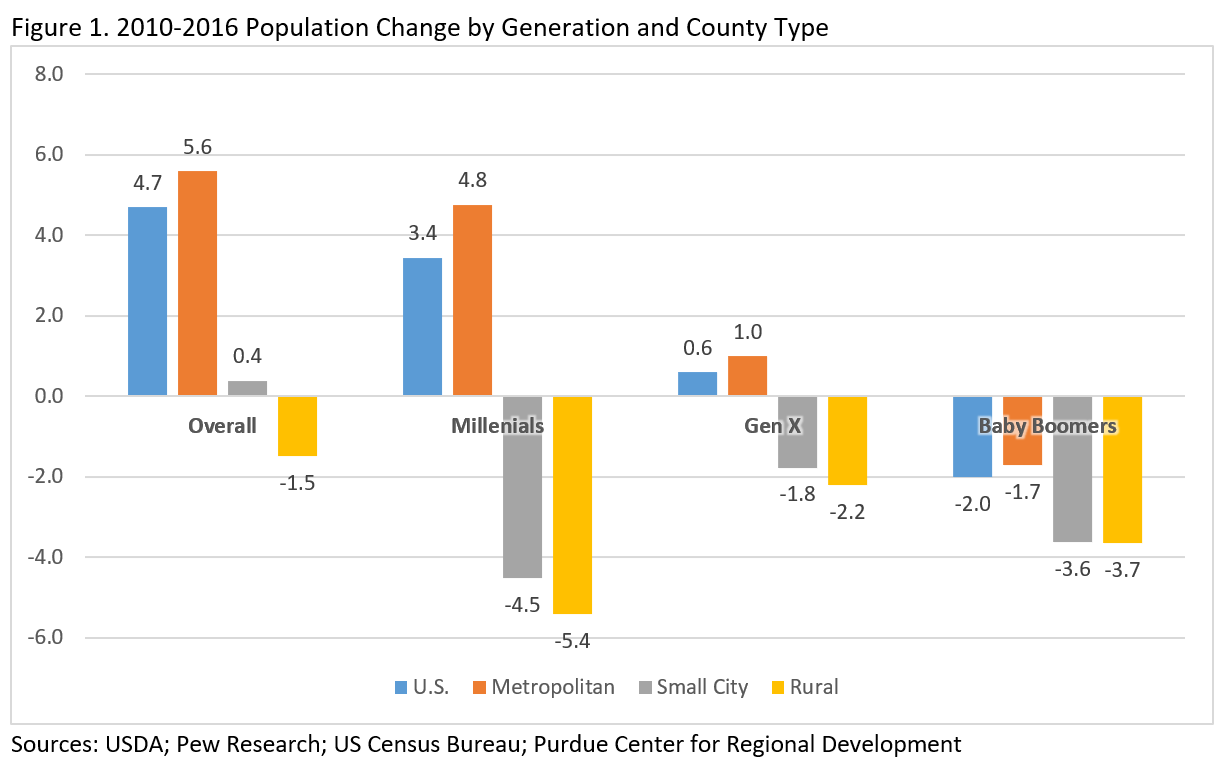 Impact on the “Really Rural” County

“Urban” and “rural” can be tricky terms when it comes to demographics. The Census Bureau reports that 80% of the population lives in urban areas. Seventy-five percent of those “urban” areas, however, are actually small towns with populations of under 20,000. They are often geographically large, with a population density that falls off rapidly once you leave the center of town.

Figure 3 (below) shows counties considered completely rural or with an urban population of less than 2,500, not adjacent to a metro area. Among these counties, about 420 in total, those with the lowest digital divide experienced a 13.5 percent increase in millennials between 2010 and 2016. In other words, in the nation’s “most rural” counties, the millennial population increased significantly when those counties had better broadband access. 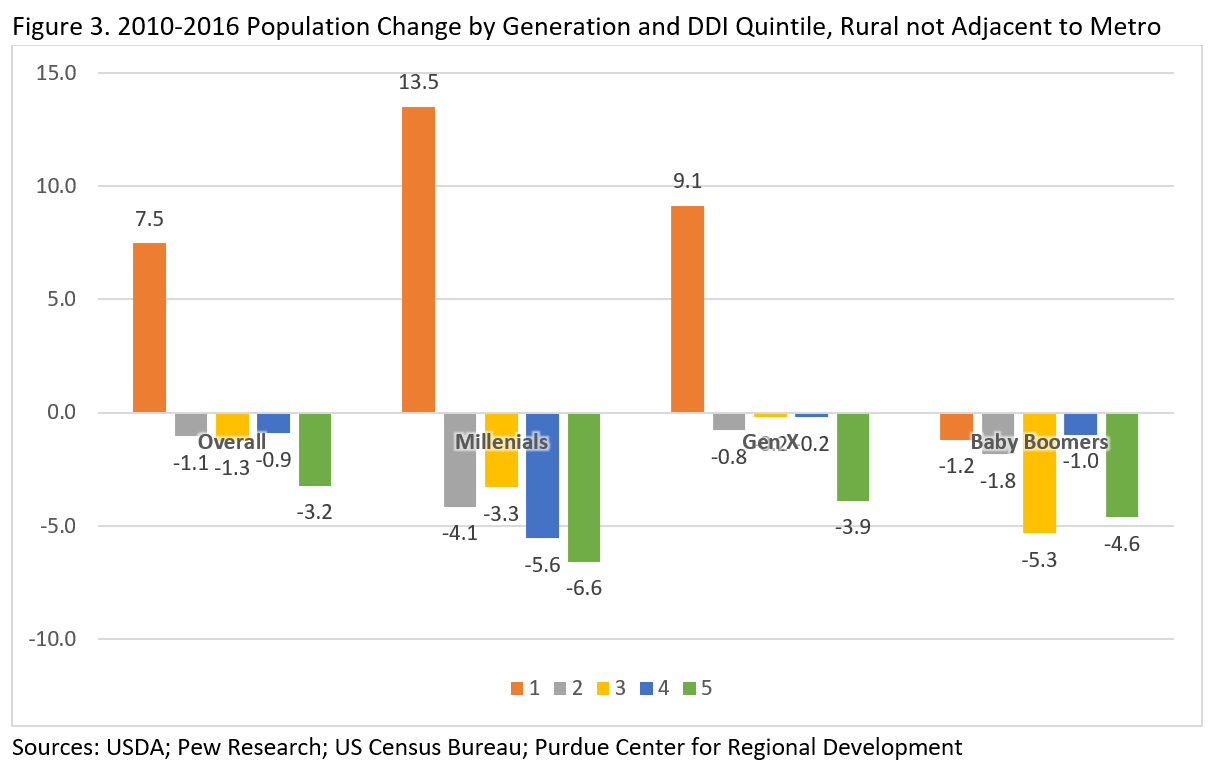 The New Connected Countryside: A Work in Progress

To conclude, if you just look at overall numbers, our population seems to be behaving just like they did in the industrial age – moving to cities where job and people are concentrated. Rural areas that lag in broadband connectivity and digital literacy will continue to suffer from these old trends.

However, the digital age is young. Its full effects are still to be felt. Remember it took several decades for electricity or the automobile to revolutionize society. Besides, areas outside metro areas lag in broadband connectivity and digital literacy, limiting their potential to leverage the technology to affect their quality of life, potentially reversing migration trends.

Whether or not decentralization will take place remains to be seen. What is clear though, is that although there are clearly other factors at play, any community attempting to retain or attract millennials need to address their digital divide, both in terms of broadband access and adoption/use.

In other words, our data analysis suggest that if a rural area has widely available and adopted broadband, it can start to successfully attract or retain millennials.

Dr. Roberto Gallardo is assistant director of the Purdue Center for Regional Development and a senior fellow at the Center for Rural Strategies, which publishes the Daily Yonder. Robert Bell is co-founder of the Intelligent Community Forum. Dr. Norman Jacknis is a senior fellow at the Intelligent Community Forum and full-time faculty at Columbia University.