A Visit to Limbo by Bicycle

Psychologist Bluma Zeigarnik discovered that people have a better memory for incomplete tasks than for complete ones. Not surprisingly, when we finish a project, we file it away. But when it remains “in limbo,” it stays active in our minds. This is how I describe the “inner lives” and the real, on-the-ground activities of Intelligent Communities. While policies are in place, they are on shifting sand. The communities I see and like are a wave of unfinished business and ideas being thrown into places that have been disrupted and were once reeling. It is the right approach, but it is also why netizens in places like Surrey, Canada (@SurreyBC) will post comments that utter a sense of disbelief and skepticism over learning that they have made an international list that ranks them high among cities. Some call it skepticism, others a PR stunt (others worse), although the majority cheer the news because an outsider has recognized their hard work.

I have seen enough Top7 cities through my work to know that people prefer complete tasks, and are not very good at accepting “Limbo” as a destination. But as great urban planners like Jennifer Keesmaat say, Limbo is precisely where we need to be at this moment. 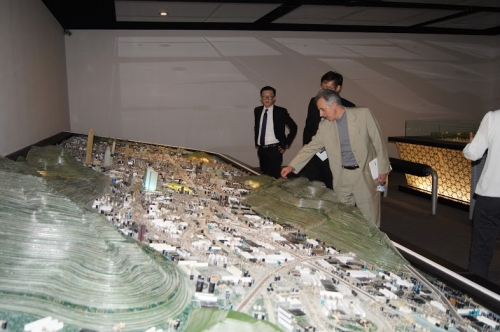 Last week I visited a Limbo in Asia: New Taipei City, Taiwan. As many of you know, it is a Top7 community for the third time in a row and one with high hopes for getting the Big Prize in Columbus in June. My visit, or at least my report of it, began on the airplane heading into Taoyuan Airport. I sat next to the head of a company that sells high-end bicycles in the USA, which are produced in Taiwan. Why? Because Taiwan is one of the major bicycle manufacturing capitals of the world. Taichung, our 2013 Intelligent Community of the Year, is a powerhouse in cycling design and manufacturing. It remains this way because, while other nations may assemble more cheaply, the Intelligent Communities of Taiwan are able to add electronic innovations to bicycles. This allows new things to happen, such as adding gear-shifting to a wireless platform and removing it from handlebars. This is adding IT over the Industrial base, which we talk about all of the time (www.revolutiontorenaissance.com).

Although my fellow passenger was heading to Taichung, he was going to stop in the New Taipei City facility because it is where many of the important tech parts for the bicycle are made.

I often heard stories like this, where New Taipei City companies had some hand in the guts of a product. I saw a few, including one which was inventing and beta testing exotic surge protectors for the new, “smart electrical grids” coming on line. The city’s 260,00 businesses (7,100 added in the past 60 months) are an array of large, medium and small companies that do all types of things.

What does this have to do with Limbo? While much of the broadband infrastructure is finished or planned, as is the massive construction and modernization of new local and national railway lines (which BTW have libraries and book kiosks inside the stations!), from the human flow, the city seems chaotic and unfinished. It is an array of day and nightlife (it abounds with late night shopping districts), where retail businesses continue to evolve. I am still not sure if there is balance to it all, but I did find one thread between the bicycle and the future of the city.

I located it in the policy and inside the office of Mayor Eric Chu. He is a central figure in Asian politics and was his party’s candidate for the nation’s presidency this past year. He lost to Taiwan’s first female president Tsai Ing-wen. To borrow a phrase from Professor Ben Barber, he is far better off ruling the world from the mayor’s office. His enthusiasm and sense of unfinished business to advance his five-year old city is better fed leading this large city than with figuring out ways to limit the expansion of the Chinese navy.

Thanks to the mandate for Mrs. Tsai he can concentrate energy on projects like the U-Bike. Nearly 8,000 of these yellow bikes populate the City. From a window in City Hall, he pointed to a cluster of them near the Subway station. He grew very animated and sounded very proud.

Using a telecommunications analogy, he said, “The bikes are the ‘last-mile’ for people, and allow them to get from the train stations to their homes. Each bike turns over six times each day!” Another 5,000 will soon come on line. While nations like China attempt to put more cars on crowded roads, the Intelligent Community nations, Taiwan and The Netherlands, are putting high-tech bike systems in place. As I say, Intelligent Communities give a “new voice to the old truths.” Their air is also cleaner.

The thread that began in row 7 on my United flight ended in an incubator work space called InnoSys. There venture capital, mentoring and a workspace converge to help startups pedal faster. One company, PAIX, which I sought out, was developing a “smart backpack,” although it calls itself a backpack app developer. When I asked what being in a Top7 city like New Taipei does for them, they did not say the food was great or that they liked late night shopping. They said that it was because of New Taipei City’s policies that they went into business. That’s big. When U-Bike was rolled into existence by the city, it was followed by City’s decision to allow data for its transportation system to be made open. From here, it was easier for PAIX to create “back pack apps.”

“This was not possible ten years ago,” said a software developer, as he fitted me with the new backpack.

Neither was the embrace of Limbo, where more and more people seemed comfortable in New Taipei City and elsewhere.