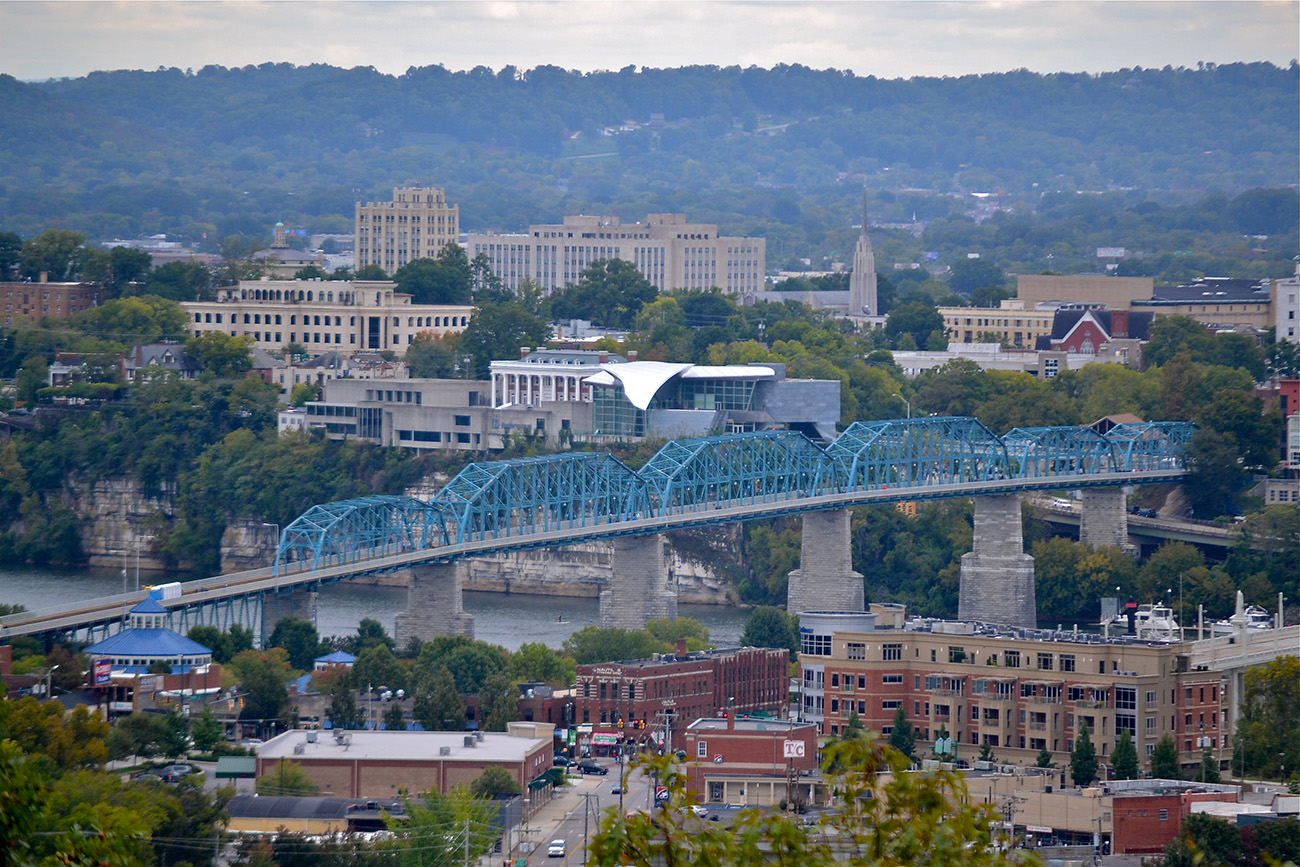 Every time you take a sip of Coca-Cola, you are tasting a bit of the history of Chattanooga. In 1901, the Atlanta-based company was selling its sugary syrup base to restaurants and drug stores, where it was mixed with carbonated water at the point of sale. Then a group of young Chattanooga businessmen persuaded Coke to sell them the right to pre-mix and bottle Coke. So skeptical was the company of their success that it sold the rights for $1. The businessmen turned that modest investment into a nationwide empire of bottling plants that sparked the global distribution of today.

For a century following the end of America’s Civil War in 1865, Chattanooga thrived on this kind of entrepreneurship. The tow truck was invented and commercialized there, and a number of national food brands were launched from Chattanooga. Chattanoogans also founded two of America’s largest insurance companies. But foundries, casting metal parts, were the mainstay of the economy. Heavy industry created wealth and ample employment for blue-collar workers. It also produced pollution. Local joked about changing their shirts twice a day and turning on the headlights of their cars at noon, but in 1969, the US government cited Chattanooga for having the dirtiest air in America.

The designation shocked the community into action. The city council joined with local manufacturers and doctors to pioneer an air-quality control program a year before the creation of the US Environmental Protection Agency (EPA). An air pollution control bureau covering all of Hamilton County, which surrounds Chattanooga, motivated manufacturers to invest $10m in pollution control. The effort proved so successful that the EPA recognized it as a national model in 1972.

Local government, business and institutional leaders did not know it at the time, but they had just created the team they needed to steer the community through tough times to come.

The 1970s began a period of long, slow decline as Chattanooga’s manufacturers fell victim to the forces of rising global competition. Legacy companies shrank and closed, and few new ones stepped up to take their place. The entire decade of the 1990s passed without producing a single new major employer.

The city did not go down quietly. The civic leadership, which had conquered the air pollution problem, organized and funded a massive effort to revitalize the urban core. In the 1990s, they constructed the Tennessee Aquarium, the world’s largest freshwater aquarium when it opened, and a children’s Creative Discovery Museum. They redeveloped the waterfront, built riverside parks and an 11-mile river walk to reconnect the city to the Tennessee River.

In fact, Chattanooga gained a national reputation for downtown revitalization, which created confidence and produced a cityscape that made citizens proud. But once the construction stopped, the projects did little to change the economic fundamentals. Community leaders entered the new century realizing that they needed a new game plan. What emerged was not a single, coherent strategy but a set of coordinated actions by different members of a close-knit leadership. Decades of battling decline gave them the determination to move ahead on many fronts.

Like many manufacturing cities, Chattanooga had an educational system designed to turn out large numbers of low-skilled workers. It gave secondary school students a choice between vocational and college preparatory tracks. In 2003, the Hamilton County school superintendent junked this system with the support of the Chamber of Commerce and began holding all students to the higher standard. In a world where traditional blue-collar jobs increasingly require problem-solving and technical certification, there seemed no other choice.

Hamilton County schools also partnered with local companies and business associations to develop more than 30 Career Academies, in which secondary school students learn core academic subjects through their application to a particular industry. At a construction academy, students learned math by applying it to costing and completing construction projects. They still read Shakespeare but also learned how to read a construction contract and write a job proposal. That project and a health care academy were instrumental in boosting student scores. In the 2009-2010 academic year, the school system increased its graduation rate by 10%.

Chattanooga is home to a branch of the University of Tennessee and the Chattanooga State Technical and Community College. Their leaders established a close working partnership with each other, the Chamber of Commerce and a dozen local organizations to bridge the education last-mile. With the help of 1,000 volunteers, they deliver school-to-work programs to 15,000 secondary school students. One program, “Reality Check,” lets students role-play being a head of household at different levels of income based on their educational attainment. As they simulate paying utility bills, obtaining child care and making choices about transportation, they quickly learn that a single parent with a high-school diploma cannot afford to buy a sports car.

The two institutions have also partnered to help lower-income students start their education at Chattanooga State and finish it at the University, which can save the students tens of thousands of dollars. Chattanooga State offers a full range of technical degrees in health sciences, robotics, mechatronics and other leading fields, while the University offers a high quality College of Business, programs in engineering, computer science and math, and the National SimCenter for computational engineering, one of the world’s pioneers in solving engineering problems through computer simulation. The state of Tennessee ranks 48th out of 50 states in education, but the percentage of Chattanoogans with bachelor’s degrees exceeds the national average.

Putting Smarts into the Grid

When electricity was first commercialized in the US, the utility companies focused on America’s largest cities, where they could get a faster return on investment at lower risk. (The same would later be true of telephone service and broadband.) Chattanooga shares with many smaller American cities a valuable legacy of that earlier commercial neglect: a local electric utility owned by the City Council. The Electric Power Board (EPB) has delivered electricity to the city since 1935, telephone service since 2000 and Internet service since 2003, always with a mission to improve quality of life and economic opportunity for citizens.

A decade ago, EPB began studying the installation of a fiber-optic network to better control electric distribution. The technology looked promising: the business plan forecast that real-time information from smart meters and distribution systems would let EPB reduce its transmission capacity by 40% while delivering a higher quality of service.

But fiber was too expensive to meet the utility’s 25-year payback requirement. EPB’s technology team put the plan on the shelf and waited. They watched as, after the dotcom bust, the price of optical fiber cable fell sharply then continued to decline year by year. When the price was right, EPB moved.

By the end of 2010, EPB had installed its network into all of the 170,000 businesses and homes in its service area. With each fiber install went a smart meter able to provide real-time data on energy usage at that location. The meters are also capable of controlling energy-hungry devices in the home or office as well, but EPB is taking it slow in exploring their use. Some smart meter installations in the US have been controversial. Customers have accused their utilities of using the new metering systems to raise rates. EPB has kept the good will of Chattanooga for decades by ensuring that the innovations it introduces actually make its customers happy.

A fiber network, of course, is not just a control system for electricity distribution. Each home or business receives 1 Gbps symmetrical broadband as a standard offering, making possible Internet, voice and television service. The interesting thing about the EPB deployment, however, is that the telecommunications services are almost an after-thought in business terms. The network is fully cost-justified just for its impact on electricity distribution; revenue from communications is just a bonus.

Not only does Chattanooga have one of the smartest smart-grid systems in the world, it is providing every resident who pays for electricity –nearly every resident, rich or poor – with the world’s most advanced broadband network. The adoption rate in Chattanooga’s poorest neighbourhoods is little different from the rest of the community, and programs from its Housing Authority have provided training and computers to more than 600 housing units.

The network is also having an impact on Chattanooga’s healthcare system. The city’s three primary care facilities include a teaching hospital, children’s hospital and Level 1 Trauma Center. They are working with healthcare business ventures to leverage EPB’s broadband capabilities. A partnership between BlueCross BlueShield of Tennessee and Cerner Medical is implementing a Web-based medical records system able to store and transmit high-resolution medical images. Chattanooga’s public hospital has received a grant to use the new network for telemedicine: remote diagnosis of patients at outlying health clinics to determine if they can be treated locally or need hospital care. One radiological group has found that the EPB network has so reduced waiting time for large medical image files that the productivity gain is equal to having another doctor on staff.

What have all of these separate but coordinated efforts brought about? By its own admission, Chattanooga began the 21st century as an economic development non-entity, with lots of great parks and museums but not much in the way of long-term job generation. By 2007, a survey of US site selectors rated it among the “50 Hottest Cities.” The EPB fiber project played its part in that turnaround. Stories on the project have appeared in The New York Times, Bloomberg TV and dozens of other news sites, as well as garnering 9 million Twitter impressions. The city has attracted relocating customer care centers, which are bringing hundreds of jobs into the region. The National SimCenter at the University is in talks with IBM about locating one of its most powerful computers – one not even commercial available – in Chattanooga to take advantage both of the highly reliable power and communications infrastructure. Its crowning achievement has been to land a $1 billion Volkswagen assembly plant, which will provide both white-collar and blue-collar jobs and have a substantial economic impact.

There is also a steady uptick in the community’s entrepreneurial spirit. Nonprofit organizations have stepped up to accelerate the base of small company formation and innovation. The Chamber of Commerce runs one of America’s largest business incubators, with 60 companies employing more than 500 people under one roof. The Lyndhurst Foundation funds a program called CreateHere, which provides business planning and support to sustain and grow Chattanooga’s arts and artisan community. Culture and tourism are increasingly important parts of the local economy. Lyndhurst has also launched a second project, InnovateHere, which provides incentives for technology companies to locate in Chattanooga. Providing additional impetus is the Renaissance Fund, an angel investment group of Chattanooga investors seeking to build a pipeline of local companies that can mature to the point of attracting venture capital.

With its unemployment rate below state and national averages, Chattanooga received good news in February 2010, when the Moody’s financial rating service named it among the first wave of US cities entering economic recovery. With so many different actors pushing forward in so many different sectors, the recovering economy is more flexible and balanced than at any time in the community’s past. That leaves Chattanooga’s leadership well-positioned to keep doing what they do best: adapting to a fast-changing world.