From Smart to Intelligent Mobility, Part 1

Urban transportation and efficient logistics is at the heart of vital, thriving metropolitan areas. Unbridled growth can result in congestion, pollution and undesirable daily stress which can evolve into impoverished environments leading to inefficiencies, unproductive land-uses and a diminished quality of life. Solving the mobility challenges of moving people, goods and services is one of the most pressing issues in modern and growing cities around the world, especially given that by mid-century three-quarters of the world’s population will be living in urban centres. With our cities ill-prepared for this massive migration, mobility and its impacts: social, economic, environmental and political, will all need to be addressed before it is too late to save our cities as liveable ecosystems. Mobility challenges impacting trade and the attraction and retention of investment and talent can seriously undermine the sustainability of the city and region from an environmental, fiscal and social perspective. This series of blogs will look at international smart technologies which aim to manage urban assets and systems to improve efficiencies, increase transport productivity and harness enhanced mobility options. These blogs will also look at city examples from around the world of a more holistic approach we refer to as intelligent communities that aim to solve transportation, sustainability and liveability issues.

Our urban future seems destined to be heavily populated. The United Nations reports that our global population will grow to 9.7 billion in 2050 from our current population of 7.3 billion of which the majority of growth, approaching nearly 70%, will concentrate in urban centres. Clearly, the projected population growth and migration will create many challenges as well as opportunities for our global communities as we evolve over the next 3 to 4 decades to 35 megacities with populations over 10 million people each and over ten times that number of more modest sized cities of 1 million each. The most significant of these are the opportunities and challenges associated with urban mobility, which closely is associated with the quality of life in our urban communities. It is also trending as one of the most important public agenda items in most developing and developed nations.

It is precisely because of the impact that such urbanization will have on our societies, that many countries have turned to technology and sophisticated private sector firms to develop solutions to help their communities to survive, and even thrive, in the coming decades. India and China, for instance, where the majority of megacities will be created, have announced the creation of hundreds of smart cities with a focus on urban efficiencies. Congestion studies around the world have written about the unusual stress levels and amount of time wasted in our cars, along with the economic toll that it can bring. Toronto, Canada is one of the worst with a round trip daily commute of nearly 2 hours for about 25% of the population within the region, reflecting $6 Billion in wasted economic opportunity.

Governments around the world have attempted to address traffic congestion in the past, yet the length of commuting times continues to get longer. Will smart mobility through advanced enabling and disruptive technologies, data and analytics, and the shared economy, be able to come to their aid? Traffic flow data and analytics, on-demand and ridesharing services such as Uber and Car2go, ubiquitous bike sharing programs, and the introduction of new urban bike lanes around the world are impacting the way in which people, goods and services will move around. With the promise of autonomous vehicles, the popular notion is that people will no longer need to own a car to have access to independent mobility. Protagonists proclaim that mobility as a service trumps the need for ownership of a car. Millennials have been quoted as not needing or even wanting to own a car; many would prefer to pay for a higher quality smart phone and the apps that go with them. As a result, a new mobility paradigm is suggested which will not be led by tires on the road and new rapid transit lines, but by our new smart phones, the sharing economy and the microprocessor. On the municipal front, will this new respect for smart mobility help urban planners and civic decision makers to achieve their public policy goals to reduce congestion, create safer and more sustainability environments, while achieving higher productivity at a lower cost?

Lack of mobility can be a challenge and a disadvantage for a community’s economic and liveability factors. But solving it can also be an economic benefit that could turn the fortunes of a city around. We saw that with Detroit in the 1950’s when automobile production was at its peak. Today, with future opportunities centred on the discussion of autonomous vehicles, the shared economy, and renewed principles of urbanism focused on good, productive density, planning for complete streets, and an emphasis on transit, cycling and pedestrian environments, we are seeing a new movement forward for mobility to bring liveability and economic benefit back to many regions of the world. Cities like Portland, Oregon; Eindhoven, The Netherlands; and Singapore have been working on strategies focused on mobility that have benefitted them from an economic, sustainability and liveability perspective for many decades now. For instance, Oregon’s legislation in 1973 requiring strict sustainability measures help to spawn the popular notion of “smart growth”, limiting sprawl and promoting intensification, which in turn made transit in communities more affordable. Other cities such as Columbus, Ohio, recipient of the Department of Transportation’s $50 Million Smart City Challenge are working towards creating smart solutions in mobility that can be replicated in many communities across the United States. In Columbus’ case, it netted in winnings and matched funding to $140 Million, a small but good beginning to look at the smart transportation issues through a specific program dedicated to building a model for other American communities to emulate. Research programs at universities such as University of Michigan’s Mcity and dedicated research organizations, such as the Centre for Automotive Research (CAR), are experimenting with aspects of the connected car, autonomous vehicles, driverless buses, hydrogen cars, advances in Intelligent Transportation Systems (ITS) and segregated mobility systems on rails, road, in the air and even in the water. The private sector is investigating smart mobility service solutions such as Cars2Go, bicycle sharing, Uber, and exotic mobility initiatives such as driverless vehicles in Masdar City in Abu Dhabi, United Arab Emirates and Songdo, in South Korea. Some communities, such as Stratford, Ontario, Canada and Ann Arbor, Michigan have developed living labs to experiment with scenarios in which autonomous vehicles can be demonstrated and trust developed by the average public in the advances in technology available today.

Other communities are experimenting with monitoring systems, from cameras and low cost sensors on street lighting, to synchronized traffic lights. These are associated with supporting mobility as well as creating opportunities for reducing congestion, environmental degradation and pollution in our cities. These opportunities for monitoring and measuring also provide robust data which can be analysed for decision making and predictive analytics, supporting better budgeting and strategic management of urban assets. But is the technology and focus on smart mobility enough as we launch our communities toward massive urbanization? Can urban planners leverage a community’s mobility ecosystem to advance public policy goals such as reducing congestion and pollution, while bringing related positive economic, social and cultural benefits to life? 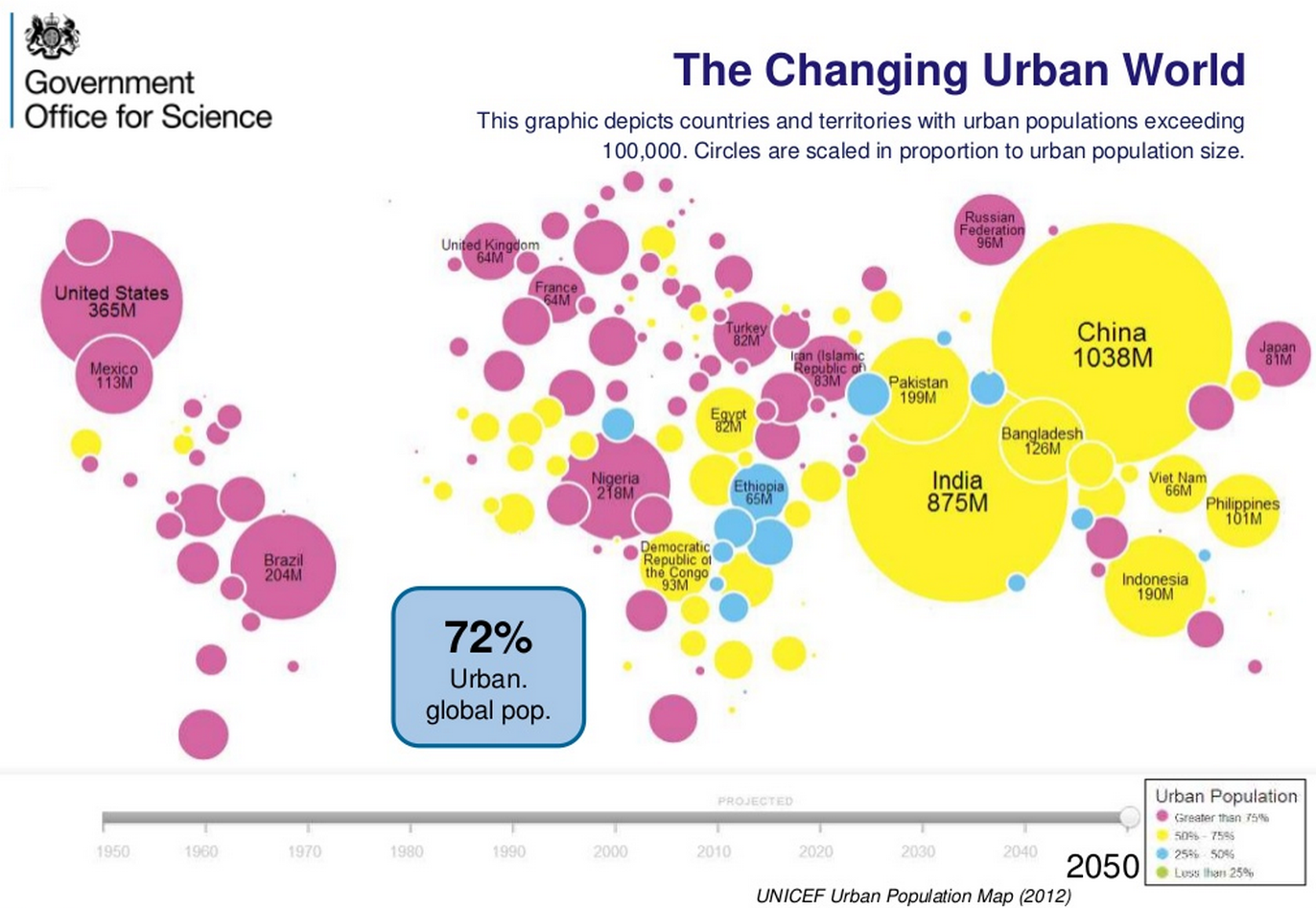