From Smart to Intelligent Mobility, Part 3

Columbus, Ohio, is the state capital of one of the states that border Lake Erie in the Great Lakes region of the United States. It has the highest metropolitan concentration of Fortune 1000 companies in America and is the home of one of the best research schools, Ohio State University (OSU). It is also home of Battelle, the world’s biggest private research institute. On the other hand, Columbus also has a large, low-income population stranded by the decline of low-skilled factory employment and was ranked 46th out of the 50 largest U.S. cities for upward mobility. As a result, average per-capita income is among the lowest in the U.S, employers in the Columbus region struggle to find qualified staff and the struggles associated with unemployment and low-wage jobs afflict too many of its citizens. Nevertheless, community-wide leadership and collaboration among organizations are working to turn this around by leading a regional approach to economic development with surrounding communities. Columbus is now one of a handful of US regions that turned the exodus of newly minted grads to instead become a magnet for talent. In 2013, Columbus was named one of the top 10 cities in the US for new college grads and employment growth in skilled manufacturing has exceeded 35% over the past decade.

The Intelligent Community Forum (ICF), a think tank that seeks to understand urban and rural community transformation and benchmarks global communities on its holistic criteria based on smart infrastructure, knowledge and talent creation and retention, innovation, inclusion, advocacy and sustainability, picked Columbus, Ohio as the 2015 Intelligent Community of the Year. A year later, Columbus was selected as the winner of the $40 million Smart Cities Competition, from among 78 entrants across the USA. According to Moez Chaabouni, Columbus Deputy CIO “The Columbus DOT win gained momentum through being recognized by ICF as the Intelligent Community of the Year in 2015 because of its foundational work on broadband infrastructure, focus on neighborhoods, and a strong public-private partnership eco system.” In addition to these funds from the U.S. Department of Transportation (DOT), Columbus more than matched it with $90 Million additional resources. In addition, several private sector firms such as Alphabet and Amazon will be undertaking pilots and contributing additional resources, such as Vulcan Inc.’s $10 million electric vehicle infrastructure. ICF’s coveted annual title did not recognize Columbus exclusively for its technology; it won because the community was striving for and accomplishing aspects of a complete community transformation from a “Smart City” to an “Intelligent Community”. It looked beyond its technological capabilities and looked at ways to use technology for the greater good of the community. Collaboration and leadership was also evident: local government worked with the private sector and with the university and applied education colleges and with other local area governments in the region, like Dublin, Ohio where corporate headquarters dominated the landscape, benefitting from the robust broadband available there, called Dublink. Together, the community made efforts to involve its citizens and organizations in creating a culture that leveraged technology for the greater good of the community. This was also evident a year later when it won the DOT’s Smart City Challenge, which asked how cities “would reshape their transportation systems if they had the opportunity. How would they reimagine the way people and goods move?” Communities across the USA were challenged to think beyond the technology itself- fiber-optics, sensors, computers and related connected smart infrastructure and dream about connecting its technology to the pulse of the community and its residents. (18)

DOT’s criteria and goals were the perfect storm for Columbus, given its challenges, as well as its capabilities. Columbus’ proposal won because it focused on it citizens around holistic, overarching, and inclusive aspects of smart mobility. Their proposal will see a smart lighting system in traditionally underserved neighbourhoods as well as development of smart traffic signals, mobility kiosks, a new BRT (bus-rapid transit) system, and other ideas related to healthcare and pedestrian safety. These efforts will also help the community meet sustainability targets that it set through its Get Green Columbus initiative. The community has developed a renewed riverfront with bikeways, bicycle parking, bike and car sharing initiatives, a free bus service in the downtown core, and plans to accommodate alternative fuels and increased pedestrian opportunities throughout the core area. Government advocacy and citizen participation efforts are also promoting these alternative transportation opportunities. Local institutions such as CAR are researching the advances possible with the autonomous vehicles. Educational institutions such as OSU, in partnership with IBM, are training hundreds of analysts in its IBM Client Centre for Advanced Analytics to develop insights from raw data that the Internet of Things will offer through a myriad of transportation and city infrastructure elements in the urban landscape. For example, through the use of data collection capabilities that will be built into their new transportation infrastructure, the city government will be able to gain insight to key community issues in low-income areas, such as the infant mortality rate, and will be able to make adjustments in travel modes and frequency in these underserviced areas of the city.

Opportunities to train people in new era jobs and to seek new research opportunities will also emerge from this DOT’s award. Libraries, training institutions, applied community colleges and government programs will leverage the results of this award to be more inclusive with all community members. In collaboration with the private sector, many new companies and non-profit organizations are researching a variety of aspects of smart mobility, such as the work being undertaken at Battelle, a private non-profit applied science and technology development company in Columbus. Among the various aspects of CAR, Battelle, Ohio State University and others in Columbus, a unique and relevant smart mobility and transportation-focused innovation ecosystem is emerging. In this case, smart mobility efforts will be much more than using technology to be tech savvy and commercially relevant. Broader community needs will be addressed on a more holistic basis, establishing this effort to be an expression of meeting the criteria of the Intelligent Community movement. Consequently, Columbus is a great example of how their community will evolve from smart mobility to intelligent mobility. It also becomes a global model for others to be inspired by and to learn from. As cities begin to share information on a more regular basis, collaboration and connected strategies become a key component of the Internet of Cities, driven by inexpensive and robust communications technologies and smart infrastructure, supported by increasingly relevant and accessible insights via data and made possible by more open, inclusive and innovative communities, like Columbus. To view Columbus’ presentation to the DOT, refer to YouTube at: https://www.youtube.com/watch?v=bFobyi6eRGI. 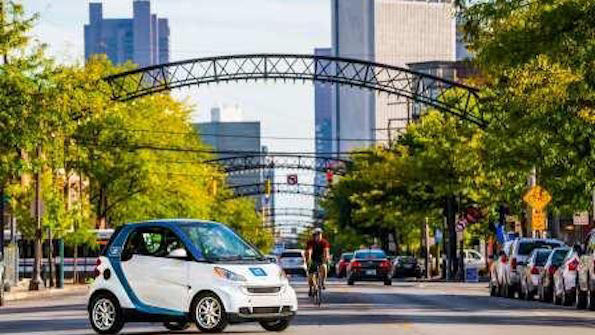