From Up and Coming to UP!

In 2008 Columbus, Ohio (USA) was named the #1 “up and coming city” in the United States by Forbes magazine. This surprised people. Most people did not know where Columbus was and those who did associated it with poverty, lack of digital inclusion and the flight of its gentrified and middle-classes from its urban center. There was the impression that Columbus, the capitol of the state of Ohio, was rusting away. Bitten by the fangs of a post-industrial collapse, Columbus was a place where, if you were born poor, you had only a 5% chance of getting into the top fifth percentile of wage earners, which nearly guaranteed a long, mainly miserable life. Your relief was hoping that nearby Ohio State University might win its football games. You could at least live a success vicariously. It was ironic. In a state (Ohio) that headquarters America’s national Inventors Hall of Fame, Columbus scored low on Richard Florida’s “creative index” list. Even Columbus’s Smart21 nomination form to ICF pointed to the disappointing ranking (#61) as one of its challenges. In 2008 it promised itself and the world more.

A disease is often healed even though a patient still feels ill. The city was beginning to implement its long-range plan, Columbus 2020, and was carefully following a path laid out by ICF’s criteria, where broadband is part of an underlying infrastructure over which a new type of Columbus could emerge. Impressively, it did. The city did not run away from what it was, because it knew nothing can run that fast. It moved forward, making adjustments as it reinvented itself and laid the foundation for generations.

Well, guess what? The up-and-coming city has arrived. No doubt about it. Based on my site visit two weeks ago, I am here to testify that Columbus, Ohio has “upped its game.” Big time. It has gone from “lab to market.” And, yes, there is a parallel between the Ohio State University’s status as the reigning national college football championship of America and the city’s Intelligent Community push. Columbus is in the “red zone.”

In the final term of Mayor Michael Coleman, pictured left, the longest-serving mayor of African heritage in the USA, Columbus has moved from an aspirational city to one with gravity. Its citizens believe. I know because I asked them if they believed. The city has an advanced plan and uses its data-driven capacity to make decisions today. It is layered with industries and people that have popped-up like weeds. It has balanced its agricultural capacity with the needs of a modern city, and tied the two economies together at every level. This is how you build an Intelligent Community, I thought, boarding my plane at its remodeled airport.

I look for intangibles on my visits because the data looks impressive most of the time. I look for gaps between what I am told and what I see. I noticed that Columbus, going against its own grain, has developed the will to grow and the self-confidence to acknowledge itself as “world class.” Unlike those of us in New York, people in Columbus are modest about their achievements. When a top professor of autonomous vehicles research at Ohio State pulled me aside to tell me that he no longer goes to New York for cuisine and culture because “I have it here now and in abundance,” I sensed that an attitude shift had occurred. There is a reason he told me this. Its cosmopolitan sense has emerged physically in the German Village, the emerging arts community of Franklinton and the quality of life in the “Short North” district, where my godchild lives. I asked him if he actually likes living in Columbus. He does. Very much. He wouldn’t lie to his godfather.

Good food and good restaurants do not make a Top7 city, of course. If that were the case six of our Top7 each year would be from Italy. Nor does public relations get your name on the ICF trophy. There was no public relations finesse from Columbus on this visit, thank god. I was able to observe things which gave me a snapshot of Columbus, ask hard questions and learn whether it is ready for the big stage in Toronto in June.

Columbus has a CIO and a very bright Department of Technology team with private sector creds that do not speak endlessly about gigabits and fiber conduits. No geek talk in Columbus. The talk is about how to serve citizens. The discussions I had over “broadband breakfasts” was of how a unified digital architecture is being put in place quickly to enable the economy and government to perform better. Their citywide connectivity plan is radical in its approach and includes an innovative relationship with a new vendor (CNX) whose task is to facilitate and lease connectivity on the city’s behalf to service providers for maximum efficiency at the lowest cost to businesses. Columbus is the anti-Google Gigabit City. Its approach made me think of the “Stockholm Miracle.” Stockholm’s open access network delivered the lowest telecom costs in Europe and unleashed one of the world’s most competitive economies. Stockholm became 2009 Intelligent Community of the Year because it understood that broadband access was the key to an economic resurgence. What really impressed me was when I asked the team in Columbus what they were most proud of. Citing the My Columbus app, Moez Chaabouni, Deputy Director of the Department of Technology said, “We have made peoples’ lives easier. I am very proud of that.” That is what they told me in Stockholm years ago too. 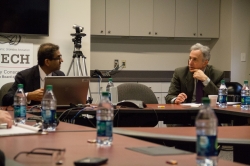 Broadband networks in and around Columbus are robust and include a monstrously impressive ramp-up of its super-computing capacity, which has advanced since the last time I visited. Back then, the Ohio Academic Resources Network (OARnet) aspired to learn more from ICF. It can teach us things now. It has built a “brainport” which taps the knowledge base of 91 colleges and universities. While visiting the Super Computer I heard sparks of competitive confidence that I had not heard before. Professor Pankaj Shah, the Executive Director of OARnet (pictured with me, right) said simply, “We are the best. We just never told our story well.” With 2,200 miles of 100 gigabit fiber behind the network, and dozens of examples of research funding projects that are flowing into Columbus as a result, he presides over a unique express lane for the local economy.

The relationship among the city’s incubators, its major university, two magnificent research hospitals and its economic development department have reached a point where each operate efficiently and have defined their role. This is key to the city’s steady commercialization of technology. The city finally cracked the nut and has begun to allow a flow between it and its university. Ohio, the home of American invention, has dusted itself off and reclaimed a trait that made it the envy of the world in another era. Its Nationwide Children’s Hospital has a system to incubate start-ups and I heard presentations from five of them which are doing ground-breaking work in gene therapy and in areas such as the identification of bacterial characteristics. Not much of this is visible to the public eye or to the media because it is the molasses of daily life. It is quiet work and not flashy. But it demonstrates how intellectual capacity, research and applied practice work together harmoniously and feed innovation. It is what I was seeking to find. There is a quality of researcher and person in Columbus that feeds its cosmopolitan emergence.

The second admirable characteristic is the degree to which the mayor and his team understand that recovering a city is done house to house. “A great community is its neighborhoods,” I was told. I was told this even in the places that have yet to experience the full recovery that much of the city is experiencing. Columbus solved its BIG DEVELOPMENT issues since Robert Bell’s 2013 site visit. Now it is solving its once-intractable urban problems. The higher-hanging fruit. The city has a Neighborhood Pride program that is low-tech but high concept. When you have limited funds, you have to think. The program leverages peer pressure and the beauty of democracy (representation and location of services near citizens) to succeed Signs will go up in homes and small neighborhood businesses when they meet certain criteria and achieve Pride status. Sustaining neighborhoods is a team sport. The program, run by two people, has made the street the city.

Columbus also has a strategy which I don’t think any community has thought through as carefully to manage its inevitable gentrification so that it does not become the core of its neighborhood recovery efforts. The recovery must come from within or else the problem has simply been transferred to another block. I was told. I saw nearly 400 new homes being built that were affordable and for the community.

One of the rising indicators of a city that is heading in the right direction is the degree to which people return home. Columbus is bringing its children home. This was not happening in ’08. It has successfully experienced population growth and is doing it with a mixture of downtown density and a constant push for an overall quality of life. Culture is its driver.

What culture? A culture is centered around athletics. Standing on the 50-yard line of The Shoe (the big football stadium) allowed me to take one thing off my “bucket list.” But it also offered me a sense of what I would call a “sense of fair play” among the city’s residents. Columbus is intensely competitive. Its culture of competitive athletics impacts the way it looks at its Top7 status. It wants to be Intelligent Community of the Year. People (lots of them) told me that many, many times. The city’s preparation for my site visit was meticulous and as comprehensive as any I have undertaken.

Yet despite its drive to become the Intelligent Community of the Year and to put on its best face the city went out of its way to show me places that by its own admission were not performing well. It had me on public forums and TV to probe any criticism I had, or had heard. Columbus is winning its future in part because it hides nothing and is open to criticism. This is in fact the mark of a winner. This city is confident that what it has is right now is good enough to land it into the endzone as Intelligent Community of the Year in June. Whether the ICF Jury and the quantitative data assessment will agree is out of my hands. It has a one in seven chance to succeed Toronto as Intelligent Community of the Year. But I can report that this city has gone from “lab to market” and that nothing should surprise its humble population come the morning of June 10. Columbus has put together a great gameplan.