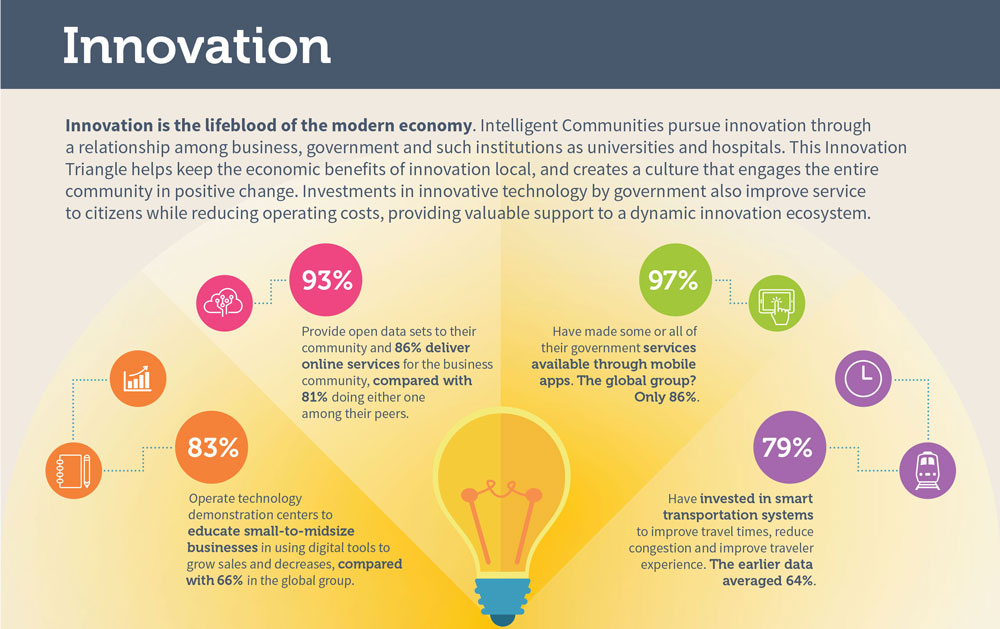 The broadband economy is an innovation-driven economy. Economist Robert Solow won the Nobel Prize in 1987 for proving that 80% of all economic growth comes from the development and use of technology. The spread of global and local connectivity has had a fundamental impact on the necessity for innovation, its speed and its economic value. Why? 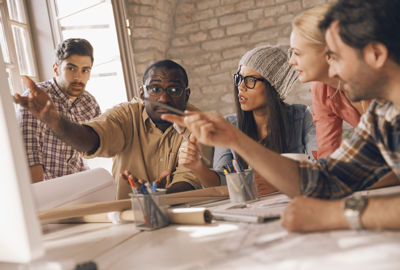 Innovation is essential to the interconnected economy of the 21st Century. Intelligent Communities pursue innovation through a relationship between business, government and such institutions as universities and hospitals. The Innovation Triangle or “Triple Helix” helps keep the economic benefits of innovation local, and creates an innovation ecosystem that engages the entire community in positive change. Investments in innovative technology by government contribute to that culture and improve service to citizens while reducing operating costs.

Creating, attracting and retaining knowledge workers are the most important steps a community can take to raise its innovation rate. Unlike traditional business as most of us conceive it, an innovative business is all about people.

In addition to building a knowledge workforce, Intelligent Communities focus on building the local capacity to innovate rather than achieving a few "big wins" in the business attraction game. Sustainable economic growth is no longer built on attracting the manufacturing facilities, R&D labs or distribution hubs of the world's biggest companies. Why? Because the world's biggest companies are not net creators of jobs. They have been shrinking in terms of total employment for decade.

Where do you look instead for local income growth? To new companies. In the 20 years between 1980 and 2000, all of the net growth in American employment came from firms younger than five years old. The US offers one of the world's friendliest economies for start-ups, but the same trend is visible throughout the industrialized world, according to the Organization for Economic Cooperation and Development.

Most small companies are not fast-growing. But a percentage of small businesses are what MIT researcher David Birch termed "gazelles" – nimble, aggressive start-ups with big ambitions hungry for the resources needed to achieve them. Successful "gazelles" throughout the industrialized nations create the income growth on which the rest of the local economy feeds. To empower them, communities should work to:

The Role of E-Government

Governments may not directly create the business innovation that powers economic growth. But local government can play a powerful supportive role. In addition to the steps described above, Intelligent Communities also invest in e-government programs that simultaneously reduce their costs while delivering services on the anywhere-anytime basis that digitally savvy citizens expect.

E-government has an impact at the local level that is both subtle and complex. Leading by example, e-government raises the public's "digital awareness" and helps to create a more innovative culture that attracts leading-edge individuals and businesses. Money spent locally on IT products, services and support increases local demand for them. Effective e-government also signals to businesses and citizens that the community is a good destination for the "digiterati." In short, properly executed, e-government can do more than save money and improve service delivery. It can also become a robust economic development tool.

Share on
See other pages related to Innovation IC Indicators