Issy-les-Moulineaux, a city just across the Seine from Paris, has an employment rate close to 96%. More than 75% of its companies are in information and communications technologies. Issy’s employers today field a workforce that is slightly larger than the city’s population, because so many companies have moved out of central Paris to take advantage of its infrastructure, business-friendly climate, lower local taxes and innovative services.

It was not ever thus.

Prior to World War II, Issy-les-Moulineaux (which translates into English as Issy of the Windmills) was the factory zone of the Paris metro area. It was also home to an army base that, in 1908, saw the historic first 1-kilometer circuit flight of aviator Henri Farman. After the War, Issy resumed its role as the industrial engine of the region – but then watched its economy erode in the de-industrialization of the 1970s and 1980s. Many of the world’s great cities have industrial sub-cities like Issy, and many remain decimated by the collapse of manufacturing employment.

But the fate of Issy-les-Moulineaux was to be different, and to a greater extent than in most places, the difference was made by a single individual. In 1984, the people of Issy elected André Santini as their Mayor. Over the next nearly 40 years, his administration provided leadership that was by turns visionary, daring and enormously persistent.

First came the vision. With its proximity to the French capital and a major Army base, Issy was already home to a small cluster of IT, telecommunications and R&D organizations. Mayor Santini came to believe that they represented the city’s future, and made it his top priority to create a business environment that would attract many more.

What would such a business environment look like? It would include the things that traditional economic development stresses: reasonable tax rates and good infrastructure, transparency and efficiency in government, access to labor and transportation. But long before it became accepted wisdom, Mayor Santini saw that would include an innovative culture comfortable with technology and adept at using it to solve problems.

As the Eighties gave way to the Nineties, the Mayor’s government made a series of investments that signaled its technology priorities. Issy became the first French city to install outdoor electronic information displays and the first to deploy a cable TV network. In 1993, schools introduced a smart card allowing pupils to pay for lunch electronically. The following year, the City Council rebuilt its meeting room for multimedia and began broadcasting Council meetings over the cable system.

In 1994, the Mayor also challenged city departments to create a comprehensive Information Plan based on study of the evolution of the Internet in the United States. The Internet was then in its infancy: 1994 was the year when Netscape, creator of the first commercial Web browser, was founded in California. Under the plan, completed in 1996, a Steering Committee representing municipal departments and elected officials was created to oversee investment in projects and maintain focus on objectives. The Steering Committee’s founding led the city to adopt the Plan Local d’Information (Local Information Plan) with the goal of transforming Issy into a “digital city.”

But policymaking was never a substitute for action. By 1995, Issy had free Internet access – with the fledgling Netscape browser and the new Internet Explorer – in its Media Library. Issy’s first version of an e-government portal was already online in 1996. By 1997, the Council added interactivity to its cable and Internet broadcast of meetings, inviting citizens to ask questions by telephone or email and get an immediate response. Public participation began to climb. Whereas few residents bothered to attend Council meetings in the past, nearly half regularly participate remotely today. In 2002, Issy created a Participative Budget-Making Platform that enables citizens to help in setting local investment priorities. (Its latest generation includes an online game for children 7 to 14 that challenges them to test their knowledge of local finances.)

Service was expanded in 2005 with the IRIS "citizen relationship management" system, through which citizens could make inquiries or lodge complaints online, via telephone, email or mail. By 2010, Issy had extended e-government to the mobile user, with mobile phone payment of parking fees and an array of mobile remote support services for the elderly. Today, the portal (www.issy.com) provides local news, online public procurement, online applications for certificates and permits, access to more than 15,000 documents, air quality and weather updates and a variety of other services.

The Santini administration also dared to place big bets on the future. In 1998, the city made headlines by deciding to outsource its entire IT infrastructure to Euriware, a 10-year-old Paris company. The goal was to create an efficient service organization that could quickly turn ideas from municipal departments into reality. Mayor Santini promoted it as the first essential step in transforming Issy into a "digital city" as per the Local Information Plan.

The following year, the state-owned France Telecom lost its monopoly on telecommunications. The history of liberalization in telecom has been mixed at best. It has succeeded in lowering prices, particularly for long-distance service, but has failed in local markets around the world to loosen the grip of incumbents. Not so in Issy – because, well before the deadline, Mayor Santini's team launched negotiations with alternative carriers, which agreed to enter public-private partnerships with Issy to deploy networks. As a result, on the same day that the monopoly ended, Issy became the first city in France to offer businesses a choice of carriers. Over the next twenty years, as it continued to welcome competitors, Issy gained a total of six alternative broadband networks, passing 100% of businesses, government agencies, institutions and households. Issy also operates a network of 150 free WiFi access points, with speeds up to 20 Mbps, around the city. Today, 95% of Issy’s households have broadband connections, compared with the French average of 85%.

With a robust broadband infrastructure in place, Issy’s government has concentrated on encouraging citizens and businesses to make it an essential part of their life and work. The city’s schools have had PCs for many years now as well as a system of “mobile classes” equipped with PCs and tablets to make learning easier and more accessible. In 2015 however, Issy began deployment of the Environnement National de Travail (Digital School Platform) for all classes in the city.

The Digital School Platform allows teachers to collaborate on teaching methods, share materials and gain access to a variety of useful data from their colleagues throughout the city while also allowing parents to follow their children’s work, activities and any other matters of interest digitally. During 2016, more than 150 teachers (over half of those in the city) attended training sessions on the Digital School Platform. Issy’s 250 classrooms now each have an interactive digital projector and laptop for the teacher, allowing easy access to the Digital School Platform and all online course materials. The city has also offered Microsoft Office 356 Pro licenses to each elementary-school-aged child and each teacher in their schools to guarantee access to digital technologies outside of school and for use in school assignments. As of September 2017, all Issy primary schools have fiber optic Internet access as well.

Outside of the school system, computer training courses are provided to all ages in the Issy Media Library and the Cube, a digital arts center. Courses are also provided purely online for those who cannot easily get to the facilities in person, such as the elderly and disabled. Senior citizens can learn how to use computers and access the Internet in the familiar and comforting environment of Cyber Tearooms as well. A campaign launched in 2006 refurbishes older computers donated by business and government and provides them at affordable prices to low-income families.

An annual Cube Festival involves the public in showcasing the many facets of digital creation through digital arts exhibitions. In 2010, the Festival introduced a multimedia urban adventure game, in which players use new technologies to solve puzzles, moving back and forth between the real and the virtual worlds.

Issy’s strategy envisions an “innovation triangle,” with businesses as technology facilitators, citizens as the users and the government as the initiator and coordinator of projects. Through partnership agreements with companies like Microsoft and European Union programs like Living Labs, Issy has become a test bed for new technologies. In 2008, the European Network of Living Labs granted Issy the official title of “Medialand Living Lab of Issy-les-Moulineaux.”

As a living lab, the city began testing new mobile and web applications as well as a local platform focused on mobility in 2015. Services currently being tested include an augmented reality history app and a participatory urbanism one as well. The local testers group includes 250 subscribers as of 2017 who regularly participate in pilot activities and provide feedback to the city on which services work for them and what changes can be made to further improve quality and accessibility for the populace.

One of the projects currently under testing in Issy’s Living Lab is So Mobility. The project aims to reduce traffic congestion, as Issy-les-Moulineaux lies next to Paris in the heart of a particularly dense urban metropolis. So Mobility’s priorities include installing traffic sensors to provide drivers with real-time traffic updates, developing new solutions for smart parking and testing new transport modes such as driverless shuttles and carpooling. As part of the project, Issy hosted an integrated mobility test in collaboration with the Colas, Cisco, Indigo and Transdev companies in 2017 to determine congestion and parking patterns produced by the Grand Paris Express autonomous metro project, which is currently in development. Three local startups also began offering efficient carpooling services in Issy in 2017, and the city has begun promoting such methods to many other companies in the area as a result of their success.

The transformation of Issy from declining industrial district to booming tech corridor has hardly been an overnight success. Over three decades, the community has worked persistently and consistently to promote both digital business and a prosperous digital lifestyle for all of its citizens.

Issy is not a university town and has no higher education in the formal sense. But with encouragement from government, France Telecom R&D conducts training for students in the telecom sector and the community’s many IT companies are active recruiters of students for internships. Studec TV, a Grande Ecole offering continuing education for broadcasting professionals, welcomed its first students to Issy in 2009, and the Paris Bar School, which has trained more than 23,000 lawyers since 1988, moved into new offices in the city in 2011.

For decades, Mayor Santini has insisted that no segment of the population be left behind when it comes to technology. In June 2010, he joined the French Minister of Health to officially open the first rest home in France to combine leading-edge technologies and health services with architectural comfort. With its own video production studio and video-on-demand network, the Lassere Rest Home uses video to help seniors stay in touch with the world and each other. A regular “Laserre Infos” TV program, produced by a senior resident and a youngster from one of the city’s youth associations, keeps residents updated on events in the Rest Home. A series of interviews called “Petals of Life” allow 100-year-old residents to share their experiences and memories with Issy’s inhabitants.

ICF recognized Issy’s vision, daring and persistence in 2009 when it named Mayor Andre Santini its Intelligent Community Visionary of the Year. His vision has guided the city for longer than most of us have lived in the places we currently reside, and it has left Issy of the Windmills well prepared to continue prospering in the decades to come.

In the News
Read the latest updates about Issy-les-Moulineaux. 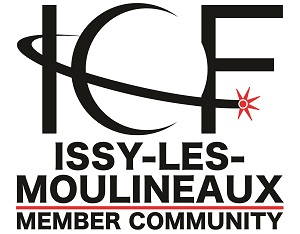