Laws are constantly changed and rewritten, even in Texas: Part 2

PART 2: With smart infrastructure, smart people and smart money, an innovation ecosystem is never too far behind.

As we see the emergence of the Internet of Things in the short years ahead we will become even more used to changes in how we will expect things to work and how differently we will want to do things. Resistance to change has been the usual excuse for communities and people, in general, in the past to accept new ways of doing things, but as our urban areas increase their populations and it becomes more difficult to be mobile; to be able to do the things that we may have done previously and we will now have to share it with more people waiting to have access to it, there will be less resistance to change. Perhaps even pent-up demand will be experienced for things that people see in other communities and expect will or should be available to them in short order.

Travelers to Europe and Asia have seen the efficiencies in road improvements from improved LED lighting to synchronized traffic lights and seamless border crossings; enhancements in the development of the bicycle culture; parking guidance systems; and enhanced transit digital information systems.

Needless to say, they come home and demand improvements to mobility for their communities. With increased immigration and tourism, applications that had previously been deemed traditional in certain regions of the world are becoming more broadly applied on a global basis. Hence applications that were familiar in the streets of Taipei, such as the countdown to a red light in traffic intersections are now familiar in the streets of Toronto; foods that were customary only in Thailand are now nearly ubiquitous throughout North America and a solution aimed at solving a problem in San Francisco is now a global phenomenon.

While Uber has been fought by taxi drivers and governments in many cities around the world, an increasing number of millennials are influencing their peers and families to begin to use the service. Think of Uber not as another taxi service, but as a digital organism that has clinically solved a mobility problem in one area, but is like a living organism that can penetrate any region of the world; learn as it grows through constant feedback and other metrics, provides its host community with improvements to its mobility issues and convenience for passengers. It clearly disrupts a traditional economic ecosystem that had previously been immune to threats. In some communities, traditional taxi systems and governments that depend on their fees are fighting this digital organism from advancing, but many bet that it will eventually win over the local population. Uber is a concept more than a product or service. Uber is also now servicing the logistics and mobile transactions related to the food distribution industry such as deliveries of pre-made lunches and dinners destined to the working customers in office towers; it is servicing the logistics involved in growing e-commerce sales; and its ability to enhance the functionality of any mobile application ensures that any new application that comes along can easily be incorporated to further improve the experience for its users. 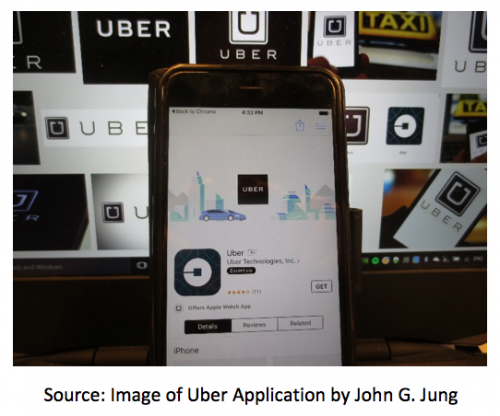 For instance, the trucking business in North America has been a fragmented and inefficient business for a very long time. Even with brokerage firms that charge large commissions, representing as much as 45% of the delivery costs, especially for short hauls, it is a world of 3rd party logistics, where fleets of independent, mostly small time operators with one way full loads make up the majority of movements. The top 5 logistics firms in North America only earn 20% of the overall revenues and according to the Economist (03/05/16), the entire logistics industry “is a juicy target, ripe for disruption”. Worth over $700 Billion in North America alone, it will only grow with e-commerce on the rise, and could significantly improve with apps and improved methodologies to travel with much fuller loads. According to Deloitte, 28% of the total distances covered, 80 billon KM, are empty shipments; an environmental waste and a huge opportunity for entrepreneurs and smart investors. Mobile apps that can make the trucking experience run quicker, cheaper, collected together to make them two ways full loads and more transparent are beginning to replace brokers.

Some startups have developed apps that mimic Uber by automatically matching drivers to loads; others scan for nearby empty or small load trucks; and others rate the driver’s past performance and availability. Truckers themselves can use apps to help them find potential loads to fill their trucks. Warehouses and shipping firms like LogiKor consolidate loads before they are shipped. But smaller and high value shipments are now being tested by Uber as taxis are being used to deliver parcels when they are not delivering people; Google is testing apps that move parcels via bicycle lanes and sidewalks; while Amazon has tested apps that deliver their parcels via drones. Driverless trucks are also on the horizon. 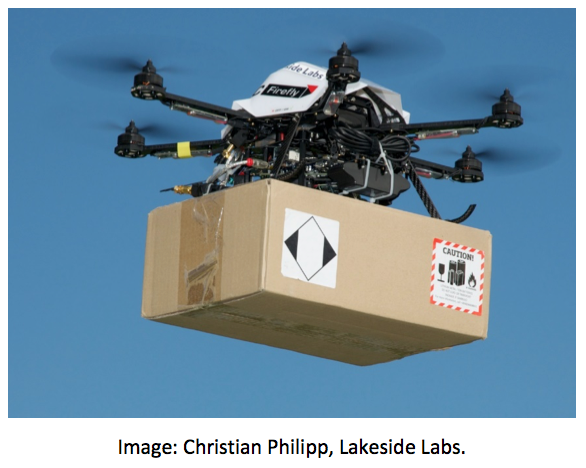 Communities around the world are creating startup ecosystems to build on the ever growing demand for innovation. Where once traditional industries once puffed out fumes from its chimneys, home grown tech startups now carve up their brick and beam spaces developing software and applications for domestic and possibly global consumption. Enter maker spaces and the high demand for disruptive technologies to make things, locally via laser cutters, 3 D printers, shared equipment and software, and the benefit of elder mentors at the table beside you.

Intelligent Communities are more than simply the efficiencies and cost effectiveness of moving goods, services and people; it addresses the transformation and evolution of cities, towns and regions through education, sharing of information, benchmarking and encouragement to look beyond and from a more holistic perspective. What are the implications of these disruptions; are there ways to even further improve the health, security and quality of our lives through enhanced opportunities in education, the economy and our cultures? How can we ensure that the benefits of these applications and new ways of doing things ensures we manage our environment for the betterment of lives and those of our children and their children? How can we ensure that all of our citizens can benefit from this prosperity and allow them to also fully contribute and participate in our societies? And how can we be sure that we are making decisions that all can agree on and collaborate together on for our collective and mutual benefit? At all levels technology can help to enable, not dominate our civilization to prosper and grow. However, we will need to be vigilant that our security, privacy and opportunities for growth and prosperity are protected and maintained as we continue to disrupt the way we do things and allow them to disrupt us along our normal everyday path.