Lou, This is NOT China!

“History is always more exciting, inspiring and approximate of the truth when you focus on telling the story of the heroic ones of the tribe,” Michael Medved, Historian.

In my travel journal from December 2016, I wrote this about my first trip there to the aspiring Intelligent Community of Binh Duong:

Vietnam. The word stirs many images, feelings and opinions, especially as an American. Even now. Here for the first time, and it is gratifying to see the work and ideas of ICF being embraced and put into action. Hopefully the ICF Method will be remembered here as a unifying idea for the Intelligent Community of Binh Duong and for human communities elsewhere in the country. The ICF Method is being put to work in this place of great potential by some amazing people in the Smart City Office, the government and in academia. Many are becoming my friends. I am glad they are working with the Dutch (Eindhoven International Project Office) on this program, since Eindhoven is a former Intelligent Community of the Year and, more than most, totally grasps the “triple helix” method. (Hell, they practically invented it!) I believe these ideas and the “helix” approach can apply everywhere, although at various pace depending on a lot of things. Vietnam will be proof of it someday. The intent and seriousness are here. But as always, as is the case just about everywhere, there is a ways to go. I will say in my talk tomorrow that this place is someday going to be “the pride of Vietnam,” because I can feel that. And I am hopeful for that to happen someday sooner rather than later.

I consider the people who are working to achieve a new type of community in Binh Duong Province in southern Vietnam—an Intelligent Community—to be heroic. This includes the Smart City Office, Becamex, the state agency overseeing the project, the academic and entrepreneurial sector and the Standing and the Peoples’ Committees of the government. We know that the government operated under a political philosophy of command and control planning—with tight management—for over 50 years. 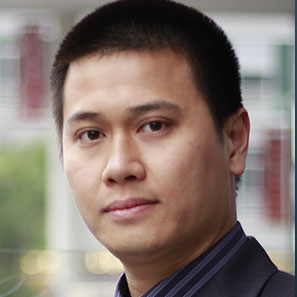 I have been to Vietnam’s aspiring Intelligent Community the past two Decembers. I have met often with the team led by the talented Dr. Viet Long and his colleagues, at ICF Summits in Columbus, New York and recently in London. When I look closely at the new development in Binh Duong city, which will be home to one million people, there is a world class university, the region’s first accelerator and government embrace of the “triple helix” method. With tutelage from ICF cities worldwide, I can confirm that all the necessary pieces have been put in place squarely and snugly for Binh Duong to move forward.

When we look at their data and match it to what is happening in cities and towns who have achieved Smart21 status, we observe that they are performing very consistently against the ICF’s indicators. These are the criteria necessary to be named an Intelligent Community in the future. When I gave my report there last December, I noted that they were catching up in their Innovation scores, although lagging behind the average in Sustainability-related items. Innovation requires an ecosystem. That will take shape as they stay on it. Confucius said that it doesn’t matter how slow you go, as long as you don’t stop!

Sustainability is a policy matter and conditioning of the public. It often requires a middle class to achieve, one that is educated and understands the consequences of a poor environment. It is clear that, if the government puts some pressure on, it will happen and probably happen quickly.

What is a Hero in the Intelligent Community Universe?

In the 21st Century, it is unlikely that “heroism” will be defined by fighting wars and capturing real estate, or by taking political risks that put nations and cultures at grave risk. Rather, a New Heroism will come from those who restore heritages, build great places for people to live and work and, as I wrote in my last post, seek out “the most beautiful way.”

I say Binh Duong is “heroic” because I see a willingness to set the past aside and return “home.” It made a commitment to make an effort each day to get better. This reveals a willingness to go forward with an idea for today’s ascent toward Intelligent Community status that yesterday’s obstacles may have made preposterous.

But no longer. Champions have emerged, and a consensus has been built. Urban planners will become heroes, as will those who return home from abroad to rebuild places. Home-grown policy architects, such as Mr. Tran Van Nam, Secretary of Binh Duong Party Committee and a Member of the Party Central Committee, who has been steady at the helm as he helps guide new ideas and them into high gear.

Bono, the leader of the famous Irish rock band U2, said about Rock and Roll that at its heart it is mainly “an act of defiance.”
“But that defiance,” he added, “leads to joy.” Joy knows no boundaries and can be shared by people vastly different but with a single goal: to go home - and to make home the best place.

The Energy of Going Back Home

Dr. Long, like many Vietnamese, has returned to the country fresh with ideas and energy to make his country better. The youth of Vietnam – and it is the youngest nation on earth – know that NOW is the time. The inspiration and partnership with cities like Eindhoven, which leads the world in the thinking of the New Heroism, has helped reaffirm the direction and serves to both guide and encourage companies such as Philips and others to invest in places like Binh Duong, which are building bright, digital age communities.

The return “home” is a rolling story for ICF. For me this started in 2016. https://tinyurl.com/ya4yosua. Now, we are watching closely as things continue to go forward. I will be doing a series of periodic podcasts with Dr. Long and others to let you know what is happening there. This podcast “documentary” will be part of our new series called, The INTELLIGENT Community. (Emphasis on “Intelligent!”)

The best way to tell whether a place is going to reach its goal of becoming “intelligent” is to see to what extent it is becoming more of itself rather than trying to imitate another place. Vietnam has, if nothing else, demonstrated that big is not always better. During my first day in Binh Duong, at a meeting with my hosts and professors at Eastern International University, I asked if I needed to wear a tie while I was there and what restrictions I was under. I was a little concerned because it was humid, I had one shirt (and had actually forgotten to pack a tie.)

Dr. Long smiled, patted me on the arm and said humorously, “Lou, this is not China. You can do what you like here.” But the cities of Vietnam, like the cities of China, Taiwan and Ohio are all in this movement forward together. Yeah, Vietnam is again at war. This time, however, it is fighting its way into the future.

(Final note from my travel journal: The desk clerk at my hotel gave me his tie. This is yet another demonstration of the amazing hospitality here.)