As 2015 ends I find myself wanting to write about everything which took place over the past 12 months at ICF. It is not possible. So I will hit the high notes. Do not expect a tedious elaboration about the family ski trip to Austria, poor Aunt Sissy’s fractured hip, or the barely disguised boast about how thrilled we “all are” about the youngest being accepted at that elite private school populated by fellow one-percenters. This is not one of those loopy familial annual reports that have become so common around the holidays! Although ICF is a wonderful family, and the urge is there. 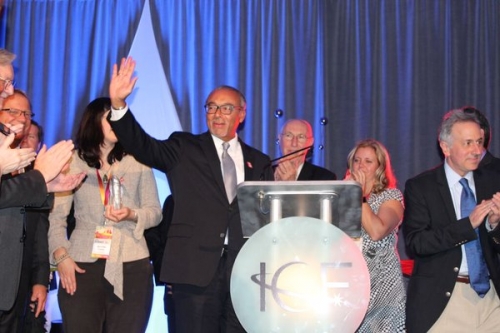 2015 highlights were of different textures. There were firsts which ensure that our movement continues to exert influence and shares knowledge and contacts well beyond our 143 ICF Foundation communities. The ICF “Connections” program brought together like-minded Intelligent Communities to share business opportunities and build new capacities.

2015 was also the year we left New York. Or, at least, our Summit left to take our show on the road. We chose to license the rights to the 2015 ICF Summit to Toronto. As expected Canada did not fail us. Quite the opposite. Summit 2015 set a higher bar in all categories. It doubled our attendance, drew a record number of Canadian and Taiwanese submissions to the Awards program for 2016 and included innovations such as the new Ideas Day. Canada’s Governor General appeared, and spoke eloquently about the potency of ideas that drive cities forward.

Dr. Jason Hu’s Visionary of the Year address, which was one-part roast (of me) and one part vivid, humorous and passionate chronicle of what his once unremarkable “no-name” city (the former “Mechanical Kingdom” of Taichung, Taiwan) had accomplished, will be embedded as one of the most rewarding 20 minutes of my career. Dr. Hu, who is now running a presidential campaign for another Intelligent Community mayor-turned-national candidate, Dr. Eric Chu, stirred the souls of those in attendance and proved that inspired leadership and the application of ICF’s principles can work everywhere. His take-away was clear: Mitchell, South Dakota, Jonkoping, Sweden and Whanganui, New Zealand need not aspire to become the “next Silicon Valley” or Singapore. Rather, they need to become themselves to ensure that brain drain turns to brain gain.

In a year packed with highlights, ICF announced the opening of another Institute for the Study of the Intelligent Community. This one in Dublin, Ohio – a perennial Top7 city of 42,000 with a city manager, Mr. Dana McDaniel, who mobilized a team from the area’s rich triple helix of talent to plan his renaissance “out loud.”

The revolution has been started. Yet as I told an audience in Lima, Peru, most revolutions fail. It is time to enter the renaissance. Hence our 2016 theme: “From Revolution to Renaissance.” To me, it simply means that the tech revolution is a done deal and, for the most part, we get it. What it has left us with is some confusion about where to go. We know where the path leads: a true flourishing of the human experience. To brain GAIN. To a new Renaissance. In 2015 we began a series of podcasts with planners and interesting people who can help guide us. It is now online.

Professor Benjamin Barber estimated that today there are nearly 400 organizations dedicated to the improvement of cities through the use of technology. That is a gain of approximately 399 since the day ICF began its mission in 1995. We could not be happier because the results are evident. We are getting better through the local engine. Local governments are the new innovators of governance in the 21st Century.

According to Google, search engines recorded that human beings searched more for the word ‘Future’ than they did the word ‘Past.’ That’s the good news. However, they also searched for the word ‘Past’ more than ‘Present.’ There is a cliché which goes, “there is no time like Now.” Physicist Erin Schroeder said that “Now never ends.” He was not the first to observe this. Buddha said it long ago. The convergence of science and intuition leads us into 2016. For cities, regions and towns the notion that “now never ends,” means quite literally that taking action and beginning to realize the full potential of broadband and planning for a future dedicated to creativity are not actions to be taken after the ski trip to Austria or when the streets and businesses are empty and shuttered. The best time is, well, Now.