Oh No…Not Another Blog About the 2015 ICF Summit…

This year’s Summit in Toronto was different and perhaps needs to be recounted. First of all, it was produced by an entirely new entity, ICF Canada, in partnership with Waterfront Toronto, City of Toronto, Invest Toronto and the Summit’s Platinum Sponsors, IBM and Cisco. We also had an anniversary - the 20th Anniversary Edition! We had our best-ever event this year since 1995 when we held SMART95 in Toronto – the world’s first ever Smart City conference. So it was no surprize to us that 20 years later we held a phenomenal SOLD OUT event once again that covered 5 days from June 8-12. 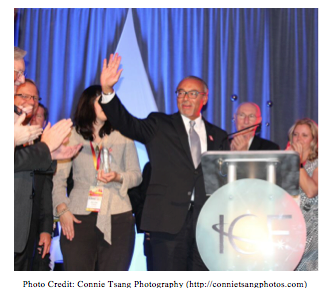 Here are the Top 21 highlights of the past week:

We heard from some delegates that this was one of the most friendly and informative conference they had ever attended. We even received the following comments from Crissie Cochrane (www.crissicochrane.com), our Top 7 Reception entertainer this year:

“This past Wednesday, I had the pleasure of singing at the ICF Summit Reception in Toronto's MaRS Discovery District. As an artist, it is a thrill to watch cities be distinguished and inspiring to revel in their success stories. Living in Windsor Ontario, I've seen the excitement firsthand when Windsor-Essex was recognized in the Top 7 in 2011. It's an opportunity to tell our stories on the world stage and celebrate each other's achievements with pride. This power to create positive change is this very thing that compels me to write and share my music. And so there is something very special about this gathering of people from around the world. The spirit of shared experience was as real and warming as wine and I was witness to a brilliant synergy: a room of world travelers, each on a journey towards a brighter tomorrow. It cheers me to think of all the inspiration that has been taken home. My sincerest congratulations to this year's Intelligent Communities!”