On May 28, 2015, at the Quantum-Nano Centre at the University of Waterloo in Waterloo, Ontario, Canada, the Eindhoven-Waterloo Memorandum of Understanding (MOU) is to be ratified in the presence of the Dutch Royal Monarchs, King Willem-Alexander and Queen Máxima of the Netherlands. The MOU was first agreed to during the visit by three mayors of the Waterloo Region when they visited Eindhoven in November 2013. Since then a committee was struck in the Waterloo Region and counterparts were also established in the Eindhoven Region. The event on May 28 will validate the work achieved to-date and the committee’s plans going forward. But what does this mean for ICF communities and how did it get to this point?

In 2010, during a Top 7 site visit to Eindhoven, I was able to bring all of the Mayors of the Eindhoven region together for a dinner at the “ Smartest House of the Netherlands”. We discussed opportunities including the possibilities with the Waterloo Region. Soon thereafter, an introductory meeting of the two regions took place during the ICF Summit the following year. As I wrote in my blog on October 2, 2013, it wasn’t until Mayor Rob van Gijzel’s visit to the Waterloo Region in June 2013 that triggered heightened community to community interest. During this visit he and his delegation gave a presentation about their community and he signed an initial friendship agreement with the City of Waterloo. That was followed by a visit from the Waterloo Region in the autumn of 2013 with the three mayors from the three main cities, Cambridge, Kitchener and Waterloo and their Economic Development staff. It was at that time that a loose multi-city MOU was crafted between Eindhoven’s Brainport staff and Team Waterloo Region’s staff, coordinated by Canada’s Technology Triangle, a non-profit FDI-focused organization that had spear-headed the relationship. 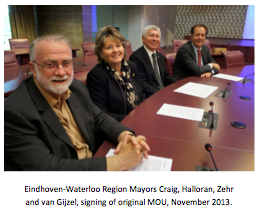 With this new multi-city MOU in hand, signed by all of the mayors from Waterloo Region and Eindhoven, as well as their Economic Development officers, the committee set upon its way to begin to work through the broad statements of interest between the two regions. The committees followed up by sharing best practices and organizing lead generators for each community, assisted by each host city. As a result, companies have started to build business opportunities in each community, thereby creating mutually beneficial 2 way investment and jobs for each other. Additionally, the Waterloo Region was in the process of re-evaluating its economic development programs and the organizations in the region that delivered such services. Mayor van Gijzel visited again in June 2014 and provided a Master Class on the history of the evolution of Eindhoven from a Philips-based company town to the one today that operates within an open innovation ecosystem coordinated through an organization called Brainport. It was created out of the crisis the community went through when Philip’s head office moved from Eindhoven to Amsterdam. Lessons learned from the Brainport experience continue to benefit the Waterloo Region as it evolves its economic development structure. During his travels, the Mayor of Eindhoven extolled the virtues of the working relationship between Waterloo and Eindhoven Regions, but also encouraged a further evolution of the relationship, to include a third connection globally. He proposed Taipei, Taiwan since Taipei and Eindhoven already have a relationship between them based on a newly established Eindhoven-Taiwan design-related program: http://www.eindhoven-taiwan.com/home Although the Mayor of Waterloo signed an agreement with Taipei to mark a similar relationship, the Waterloo-Eindhoven Committee have yet to work on the idea of the Global Triangle, preferring instead to get the Waterloo-Eindhoven relationship right first.

Among our individual travels since Mayor van Gijzel’s June 2014 visit to Waterloo Region, the mayor and I raised our unique relationship during the September 2014 gathering of the Parliament of Mayors in Amsterdam, which we both attended. Since it garnered interest among these global mayors, we knew we had something special here. Later, during a critical meeting at the residence of the Canadian Ambassador to the Netherlands during the visit of His Excellency, the Governor General of Canada, David Johnson and his delegation to The Hague on October 25, 2014, this idea was once again raised. I was part of His Excellency’s delegation to Europe and we requested that the Roundtable at the Ambassador’s residence include the Mayor of Eindhoven in order to explore the opportunities to foster greater linkages between Canada and the Netherlands. This day-long Roundtable was also attended by Princess Margriet and her husband Pieter van Vollenhoven, members of the Dutch Royal House. I recommended that we continue to pursue the Waterloo-Eindhoven relationship as not only a valuable city-to city relationship but also an important nation-nation linkage that would continue to foster linkages that could have significant 2 way trade and investment implications. Timing was also important to both countries. The Canadian-EU Comprehensive Economic Trade Agreement (CETA) was recently agreed to between Canada and the EU. The relationship between Canada and the Netherlands would benefit from increased trade and investment in each other’s countries. In addition, the best practices from this relationship could be used as an inspiration for other like-minded communities to pursue similar approaches. That Roundtable not only had a royal connection, but the Dutch 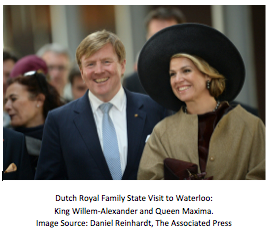 Ambassador to Canada was also in attendance. As a result of the dialogue generated at this special Roundtable, it was decided that both Ambassadors would travel to the Waterloo Region to explore possibilities to add Waterloo to the Royal Visit to Canada in 2015, marking the 70th anniversary of the Liberation of the Netherlands. In addition to the State Visit to Ottawa and Toronto, Waterloo was now highly recommended to officially be part of this visit. The presence of the Royal Monarchs at the signing of the Memorandum of Understanding would give heightened value to the relationship between these two Intelligent Communities.

In April 2015, a Waterloo Region delegation traveled once again to Eindhoven to undertake meetings arranged by a lead generator hired by Canada’s Technology Triangle and facilitated by Eindhoven’s Brainport. Likewise, along with the King and Queen’s visit from May 26-29, there will be a significant business and educational delegation visiting the Waterloo Region from the Netherlands. An announcement will take place at the University of Waterloo on May 28 regarding scholarships to eligible Canadian university students in recognition of the 70th Anniversary. Additionally, the business delegation will spend several days with a lead generator exploring business opportunities in Waterloo Region, facilitated by Canada’s Technology Triangle and the Waterloo-Eindhoven Committee. It is anticipated that through efforts explaining the business cases and competitive advantages of locating in each other’s communities, several businesses will locate branch operations in each other regions. Similarly, students and professional talent will also locate in each other’s communities. This is a significant economic benefit for each community and will prove ICFF’s connections can work to be mutually beneficial for ICFF member communities.

ICF’s connections played a critical role in the beginning of this process. Other Intelligent Communities could learn from this experience. On June 9, at the ICF Summit in Toronto, the Mayor of Eindhoven, Rob van Gijzel and former Mayor of Waterloo, Brenda Halloran, will explain what inspired them to work closely together as ICFF member communities to form this unique alliance. Likewise, at this same session, Canada’s Technology Triangle’s Catherine Bischoff and Brainport’s Naomie Verstraeten will speak to the implementation of the MOU and what can be expected moving forward between the two regions. This is a unique opportunity to hear from two of the most innovative regions in the world how their collaboration and sharing of the innovation ecosystems will benefit their communities and their countries. This is an important economic development success story with tangible results – a story not to be missed. 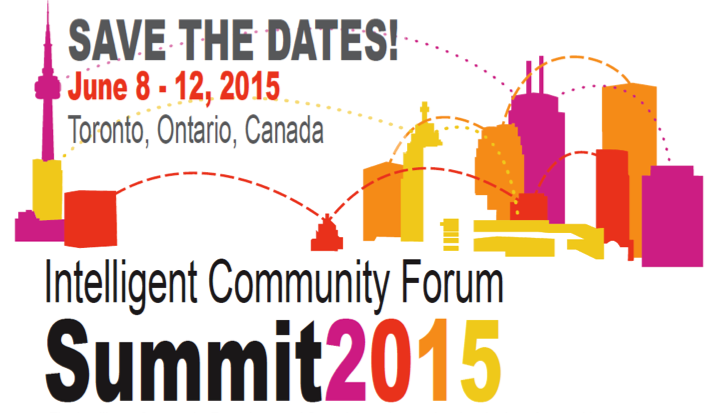