However, it is good advice. As result, the three of us are now more sensitive and watchful. In the Top7 communities’ defense, I would expect a bit of it to take place. It is natural that a place in the running for a global award put on its best face, and maybe even do a little short-term plastic surgery as well.

For the Jury to do its job, they need to know the unvarnished truth, and our observations need to be straight-up with no chaser. So I guarantee you that our reports, to the best of our ability, are not only about the shiniest lights among the Top7, LED or otherwise. While we are being hustled past the broken parts, we look and ask about them too. To the credit of Surrey, Canada, where I recently did my site visit, the city added broken parts and access to those tasked with mending them, including the Fire and Police chiefs, as part of my Agenda.

Of the group of Top7 this year, Surrey (despite making the list for the second straight year) remains the most controversial selection. Even Canadians refer to it as a kind of “ugly sister” to nearby Vancouver, and a place that is not “nice enough” by Canada’s marvelously civil standards to be considered one of ICF’s elite.

So I began with this particular baggage. However, my experience offers filters and challenges to these often aging stereotypes. It is increasingly true that ICF has evolved into the champion of the “no-name” place. For a good reason. The “no-names” try harder and think in more innovative ways. When you have little money, when nothing has worked and when you have little or nothing to lose by going in a new direction, you are presented with the “Municipal Cuban Policy.” This refers to the USA’s new policy to open up a relationship with Cuba, a long-time enemy, and to try something new. President Obama said simply, “Why keep trying what does not work?” Common sense, right?

Surrey can teach the big boys in Washington and Havana a lesson. They had little to lose by going down the path toward Intelligent Community status. As I looked around at their relocated City Center, which is near a major university, nearly 30 new developments and the increasingly iconic Innovation Boulevard that is part of an agile, work-in-progress 50- year Sustainability Plan, I sensed that while this was Surrey’s “Potemkin Village,” it was also quite real and has started to have the effect of creating a real center of gravity for the place – and a new image. One of Surrey’s goals is to not be defined as “a bedroom community” with Vancouver as the main room in the house, but a community with its own personality and economic core. This core is going to be the robust clean technology industry, which has already launched. Ten percent of all of the cleantech companies in the province of British Columbia are located in Surrey. It is one of Canada’s demographically youngest places, is accepting of immigrants (nearly 20% of its residents are from India’s Punjab), and has affordable and developable real estate. They take the Revolution to Renaissance (www.revolutiontorenaissance.com) idea seriously. Council member Tom Gill, who is Punjabi by descent, advocates that Surrey be a place where iconic structures rise to define it. Their fire and police chief are using innovative “socio-cultural” approaches and data-driven methods to combat crime and fires. It is working. Fires are down and crime is going the same way.

“The greatest waste in the world is the difference between what we are and what might become,” Ben Herbster once wrote. This is echoed by the city’s mayor and IT manager, both of whom have directed that information technology be a part of every municipal activity, but not without innovation at its core. “We want to find out who we are,” IT Director Sean Simpson told me. “It is an adventure.”

Surrey is not a spectacularly visual treat. It is not as pretty as the Bambino dance group I discussed in my speech about innovation at City Hall! Worse, it is concentrated throughout not one, but five basic city centers or towns. This adds to the challenges. It has a troubled past. The media, always slow to recognize a resurrection – and rightfully skeptical when one is claimed – is quick to reinforce the poverty which does exist (16% of Surrey in fact).

But my eyes told me that while the broken stones are visible, a lot of them are from demolition from a past that is vanishing. A new “Cuba Policy” is underway and the adventure in Surrey will be one that our Jury must consider. 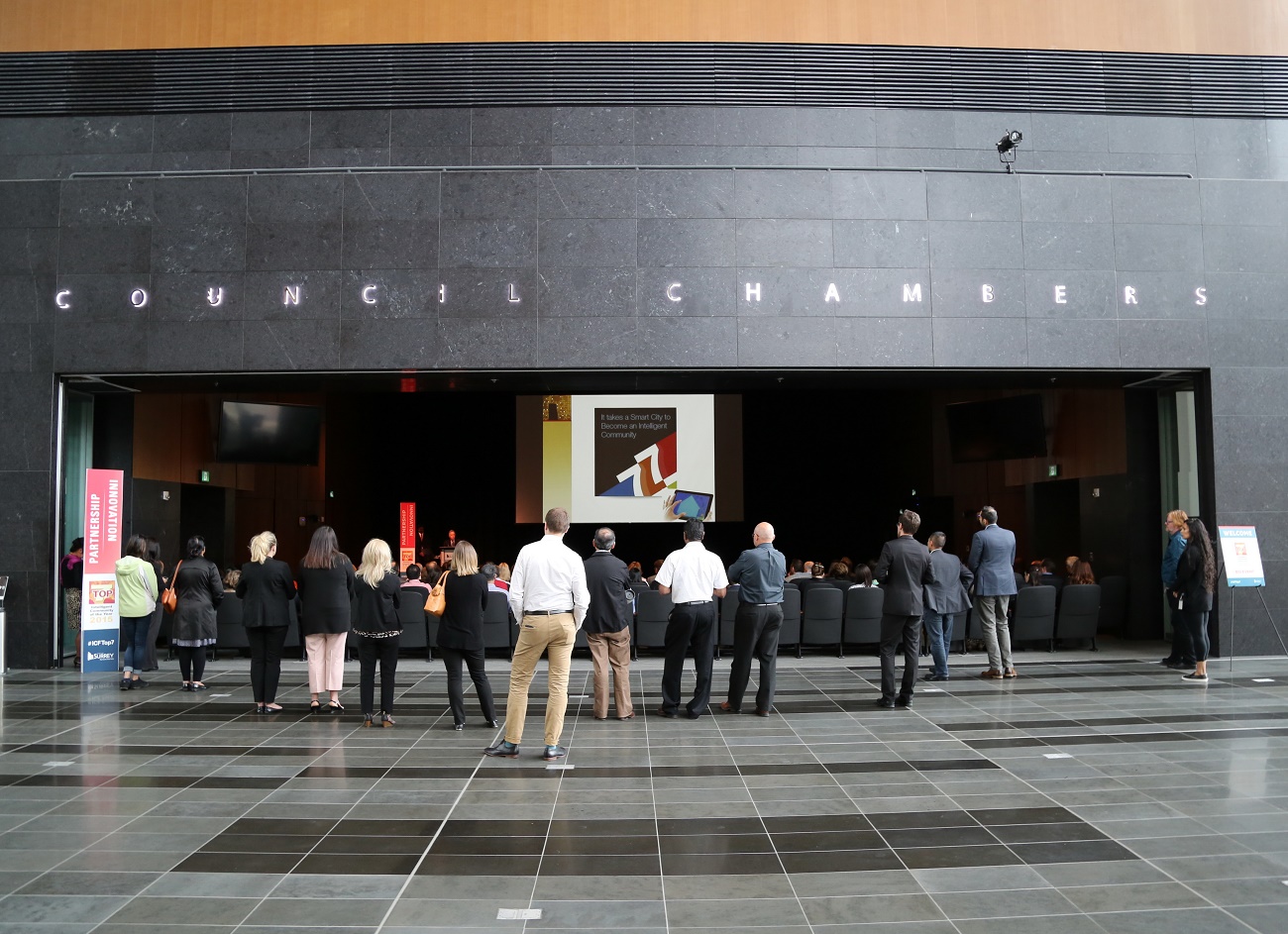