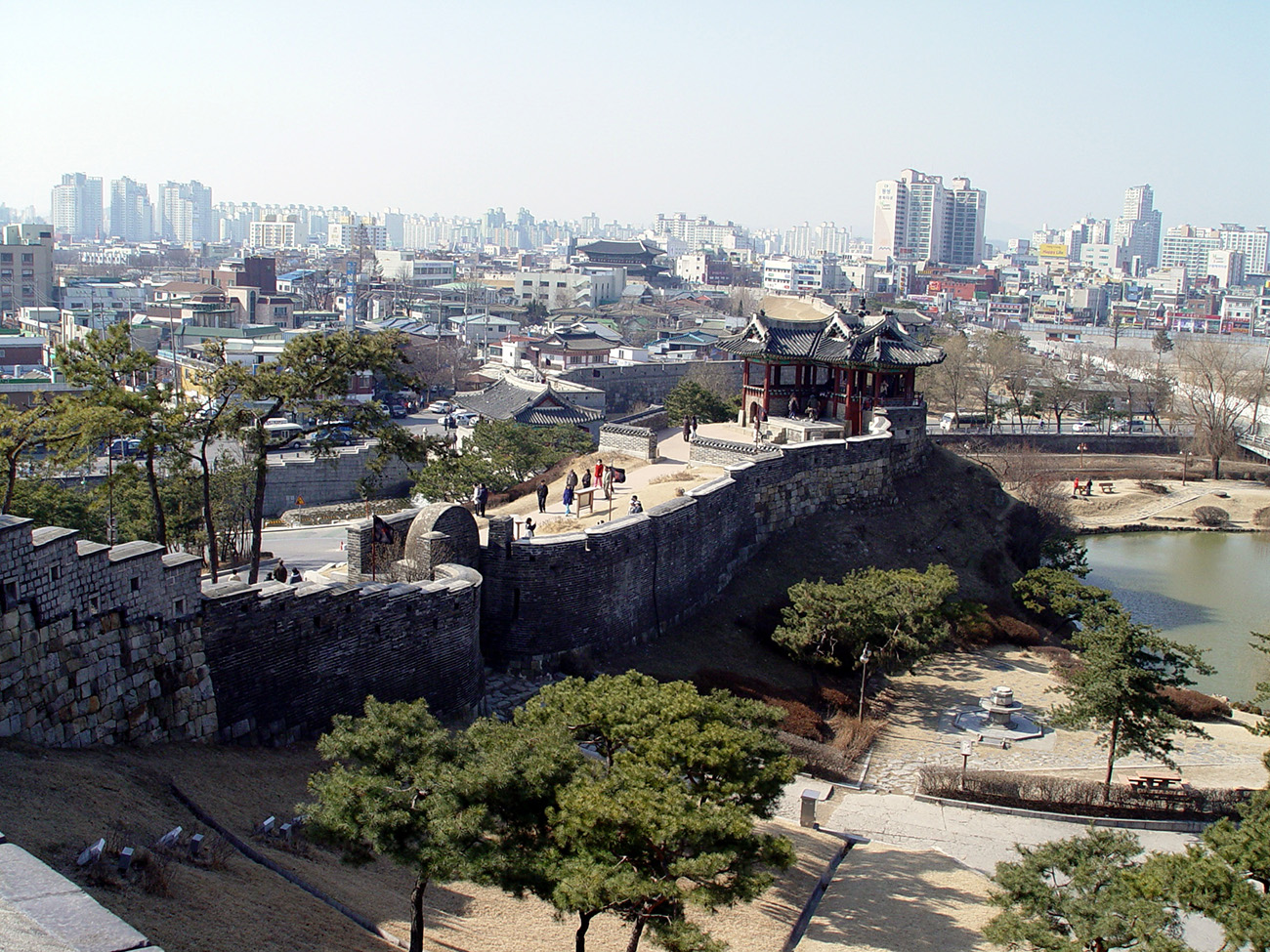 South Koreans expect government to have a strong hand. The nation is a world leader in broadband penetration and speed in part because of directives issued by the national government beginning in 1995 that drove massive investment and fierce competition among private-sector carriers. It wasn’t always pretty. Companies lost money, went bankrupt or merged with each other before finding profitability. But the end result for the nation was a broadband infrastructure the envy of much of the world.

In Suwon, which lies south of Seoul and is the capital of Gyeonggi Province, a strong governing hand goes back centuries. The city was founded 200 years ago as Korea’s first planned community by King Jungjo, the 22nd ruler of the Chosen Dynasty. Long a relatively small town, Suwon has seen a surge in its population in recent decades that now makes it the second largest municipality, after Seoul, in the nation.

Like satellite cities in other regions of the world, Suwon succeeded in part by serving the needs of its much larger neighbour. It became a transportation center for southern Seoul as well as a manufacturing hub specializing in both technology and heavy industry. Then came the Asian financial crisis of 1997. Suwon's largest employer, Samsung Electronics, moved outside the city limits in 2003 and another big employer, Samsung Corning, ceased operations in 2005. While the big chaebol like Samsung dominate much of South Korea’s economy, Suwon’s leadership realized that such domination comes with costs.

Investing in a New Economy

Led by Mayor Yong Seo Kim, Suwon set about creating an economy whose growth would be based on small-to-midsize enterprises (SMEs) specializing in IT, biotech and nanotechnology. City government was not shy about backing that goal with public investment. In 2003, the city began development of Suwon Industrial Complex I, which was completed in 2006 and now houses 156 metal fabrication companies. Complex II, completed in 2008, is home to 40 companies manufacturing electronic components, imaging, acoustic and telecom devices. Complex III is now under construction with a target completion date of 2012. Suwon provides the infrastructure and a range of incentives to encourage developers and factories to locate there.

For smaller firms, Suwon has put US$7 million into developing nine multi-tenant buildings, including Suwon Venture Plaza, Digital Empire and Innoplex, where 900 companies now employ over 11,000 people. A further three multi-tenant buildings are under construction to house 320 companies and over 4,000 employees. Attractive incentives for occupancy include exemption from or reduction of registration, acquisition, property and value-added taxes. The latest project is a Business Incubation Center that opened in 2008 and is now home to 25 companies.

Public-sector support extends beyond property investment and tax incentives. City government also allocates US$27m per year as investment capital to strengthen the competiveness of SMEs. The funding is designed to be matched by private investment or bank loans, but for companies too small to attract private financing, Suwon offers subsidies of up to $18,000 to support prototype development. Suwon also has an innovative Electronic Trade Office that connects to other Korean cities as well as partner cities in Asia, Europe and Latin America. The Office offers products online for sale by Suwon companies and provides a videoconferencing system to promote deal-making without the need to travel. To date, companies have sold $200,000 worth of products through the Office. A branch office of the Korean Trade Investment Promotion Agency extends this effort by providing overseas representation for Suwon companies. From 2003 to 2008, nearly 500 local businesses took part in expositions and market development projects.

Anyone with experience in municipal government knows that just throwing money at a problem is no guarantee of success. While betting taxpayers' money on buildings and companies, Suwon has also built a web of collaborative relationships among industry, universities and government. The tangible result is a large number of public-private research centers and institutes, including the Gyeonggi Regional Research Center, Content Convergence Software Research Center, Gyeonggi Bio Center, Korea Nano Fab Center, Next Generation Convergence Technology Institute and Green Energy, Auto Parts & Material Research Center. Some are located at local institutions including Sungkyunkwan University and Gyeonggi University. Others are based in yet another development, Kwangkyo Techno Valley, a $450m campus that is home to 145 R&D organizations.

Seven years of nurturing SMEs in specific industries have borne fruit. Two-third of Suwon companies specialize in one of its targeted industries: electronics, medical devices, chemicals and specialty metals. Companies with 50 or fewer employees make up 94% of all employers in the city.

Suwon's efforts to develop a 21st Century information infrastructure have been no less bold. In 2005, city government established the Ubiquitous Suwon Master Plan, branded as U-Happy. The goal was to make Suwon's government more transparent, more responsive to citizens and more cost-effective.

The city decided to develop its own governmental network despite South Korea's impressive broadband infrastructure. It was able to trim nearly a quarter-million US dollars from its operating costs by eliminating leased lines, and the use of conduit already installed for the transportation management system kept construction costs to a minimum. Control of its own network allowed Suwon to boost connection speeds from 32 Mbps to a blazing 1 Gbps.

What followed was a massive re-engineering project to consolidate and integrate multiple existing computer systems covering taxation, real estate, public health and safety, transportation management and city administration. Five city agencies collaborated on integration of GIS and aerial imaging data to simplify planning, eliminate hazards and increase efficiency. A unified Web gateway now provides citizens with access to online service requests, reports, payment, news and information. With 10 million unique visits per year, the site handled over 600,000 transactions in 2009 for 93,000 registered users, who can also elect to receive news and access their accounts by mobile phone. A Happy Suwon Broadcasting Station delivers local news over the Web on city government, cultural events, education and entertainment programs. And to ensure that services are available to the offline population, an Interactive Data Digital TV service offers government news, interactive services and information on traffic, health and culture through the familiar interface of the television set.

Suwon works to steadily reduce the size of that offline group. More than 35,000 people have received digital skills training from skilled volunteers in 20 education centers since 2002. As the city replaces computers in its offices, the old units are refurbished and distributed to children's centers, libraries and social welfare facility. Nearly 5,000 PCs have reached users since 2003, and the city also runs a PC clinic to provide ongoing maintenance for the systems. Suwon has also expanded the number of libraries, each with public access computers, from three in 2002 to eight today. Over five million visitors entered the libraries in 2009, up from 2.2 million in 2003. The Suwon Love Scholarship Foundation awarded $459m in scholarships to 800 students, as well as research grants to high-performing teachers, from 2006 to 2008. The scholarships go to low-income, high-potential and special education students to help pay the high costs of education.

Investing in the Mind

"Investment in education," wrote Suwon in its Top Seven nomination, "is one of the most sound and rational outlays of capital that a government can make." Between 2002 and 2009, the city backed up that proposition by investing more than US$360m in upgrading school facilities, opening new schools and expanding staff. A further $186m will fund the 2010 Suwon Education Development Support Plan, which includes 74 individual projects focusing on education for a global economy.

Globalization is much on the mind of Suwon's leadership. The Happy Suwon English Village opened in 2006 to provide an intensive learning environment in the global language of business to 7,300 elementary school students per year. A new Suwon Village of Foreign Languages, scheduled to open at the end of 2010, will provide the same environment for languages including Chinese and Japanese. In 2007, Suwon established the Gyeonggi Suwon Foreign School to make the city a premier destination for expatriates with families working for Korean multinationals. The school's targeted enrollment is 75% foreign nationals and 25% local students.

The financial crisis of 1997 set Suwon on its present course and triggered investment in building an SME-driven economy, e-government and education. South Korea was not immune to the recession of 2008-2009; its economy shrank 5% in the last quarter of 2008. But it began to rebound in early 2009, thanks in part to strong government action. It was perhaps no coincidence that, in January 2010, the United Nations announced that Korea had topped its e-government rankings, the first such performance by an Asian nation. It was the same success story found, on a local scale, in Suwon.

In the News
Read the latest updates about Suwon.

Want to know more about Suwon?
Suwon was featured in the Intelligent Community Forum book Seizing Our Destiny.