The Internet of Cities

This year ICF is focusing on a new idea as its theme for the ICF annual Summit - the Internet of Cities. Cities are where transformation is happening at an unusual pace, especially with the convergence of the Internet of Things with the opportunities posed by 5G. Cities are also the drivers of change, where centers of innovation and creativity occur, where inclusion and circular economies take place and where cities are crucibles for experimentation and resiliency. Key areas that cities are investigating and investing in include autonomous vehicles, artificial intelligence, robotics, virtual reality, Internet of Things and smart city infrastructure. 5G will make all of these more likely and possible sooner than we imagine. As a result, cities and companies have quickened the pace for collaboration in order to be able to accommodate these transformative applications into their urban planning and design as well as into their long range budgets to deal with issues related to sustainability and resiliency. How will this be accomplished? 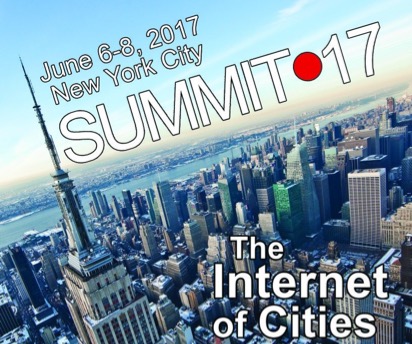 The Internet of Cities:

Cities around the world are being challenged daily and must learn to communicate and share best practices in an urgent and efficient manner. Many cities cannot depend on their national governments for solutions. Instead collaborative city-to-city engagement will be necessary and technology will certainly aid them in this regard. But change for people is among the hardest forms of transformation in communities, including: embracing and leveraging new technology; educating citizens to be able to use advances in technology and to adapt to new processes and procedures during this transformation; seeking ways to benefit from the innovation ecosystem that may emerge as a result of the effects of the transformation; ensuring all of the community members participate and benefit from this transformation; and developing sustainable long term plans and the budgets necessary to sustain the initiatives over the long term. All are strategies that involve the determination and actions of people, rather than the technology itself that will continue to change and evolve as well.

This is a key goal of the Intelligent Community movement – to ensure that technology by itself is not the focus of community transformation, but the decisions and actions of people during this transformation are equally considered, if not more important. People deciding to share best practices in fair and equitable ways may be at the heart of the new Internet of Cities. As the agoras of cities past may have been the original “internet of cities” using the markets and civic squares to be the vehicle through which ideas and goods and services were shared, today’s Internet is emerging as the key vehicle to exchange these same, although more advanced ideas, goods and services. However today, instead of a geographically limited agora or marketplace, this is able to be undertaken globally in new and exciting ways, from virtual reality to the application of artificial intelligence, aided by technological advances into the future. This will be accomplished by individuals acting locally as well as globally.

But sharing major solutions to common city issues takes on a different dimension, such as conceiving and undertaking major plans to address cybersecurity, dealing with emergencies and significant catastrophes in similarly configured cities, and managing for sustainability and resiliency.  Like communications between and among machines and devices through the Internet of Things, collaborating among cities will need to take on a different form. Its most efficient and cost effective vehicle will likely become channels through which the future of the Internet of Cities can evolve. However, it will take champions in each city, such as mayors and other civic, institutional and private sector leaders to make this happen. Behind the Internet of Cities are the people.

Move over United Nations, a new kid is on the block. It’s cities!

The Internet of Cities will need to emerge as a new way to communicate, share and perhaps ultimately survive as we tackle some of the most important issues facing cities in the years to come.