The Public Realm in Smart Cities and Intelligent Communities

The public realm in any city abounds with streets, lanes, parks and public squares, but also public facilities such as the public lobbies and spaces that anyone from the public are able to legally access. It can also include areas below ground where the public may access public areas under streets and buildings, spaces below bridges and even the airspace above these public spaces. The public realm arguably also includes public vistas, namely what the public can see from a distance. As we expand our thinking about what should be considered the public realm in our villages, towns and cities, we should also expand it to include what we can’t necessarily see, but increasingly experience: the impact of broadband wireless services in public spaces and how it contributes to the sense of place in our communities. 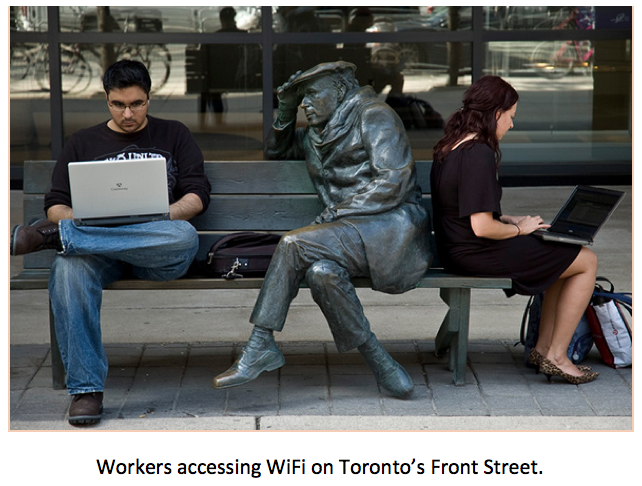 As the design and infrastructure of our urban public spaces are undergoing significant transformation, broadband wireless Internet access is becoming as important and pervasive as the provision of other public amenities on streets and in public squares and parks such as sidewalks, cycle paths, benches, and water fountains. Activities related to Internet use has become an everyday activity in public spaces and is no longer limited to private spaces in the home, workplace or library. Tourists, local workers and residents use the public realm to experience the social diversity that urban spaces offer. But they are also increasingly flocking to urban spaces seeking free Wi-Fi hotspots for their smart devices, such as in Federation Square in Melbourne, Sugar Beach in Toronto and Bryant Park in New York City. These are made possible through the proliferation of broadband wireless Internet provided by municipal and community Wi-Fi offerings, free hotspots in cafes and restaurants and through 2G, 3G and 4G LTE wireless communications provided by advance mobile networks. But can the rapid rise of Internet access in public spaces reshape the public realm of the future and change what we define as sense of place?

The public realm is a social setting defined by its public urban spaces, and typified in a city’s streets, parks, and plazas, but it is also understood as part of a much larger public sphere of influence that connects many types of physical, social and viral networks. It plays host to both planned as well as serendipitous encounters with existing acquaintances and strangers alike, as well as it invites others to come and participate. For instance, flash mob experiences are organized through social media, resulting in a group of people who assemble suddenly in a public place, perform an unusual event and just as quickly disperse. Their performance occupy a space in a unique and special way, from entertainment to political advocacy, and can have a lasting impression about the space in the same way as historical events can create a unique sense of space and place.

For example, millennials use Twitter, Instagram and Facebook to instantly promote by “sharing” details about the places they, their friends and heroes are currently occupying, attracting others to participate in physical and viral space as well. These actions, multiplied many times over, have significant implications on tourism, activism, neighbourhoods and sense of place. A formerly underused street or square could become famous through social media overnight and may attract many new participants instantly to that space or over the next several years. For instance, the New York Times recently heralded Cairo’s Tahrir Square as Egypt’s newest tourist attraction. Previously, in 2011 we witnessed the impact that social media like Facebook and Twitter had on helping demonstrators in that very same square (and later across the Arab Spring) to organize, transmit their message to the world and to galvanize international support. That space, formerly not so well known around the world, has been changed to become an important place locally as well as internationally. How will it change with notoriety? For instance, Tiananmen Square became famous through global media exposure, but as a result it has also become a different space physically through security access limitations as well as procedures for entering and using the space. 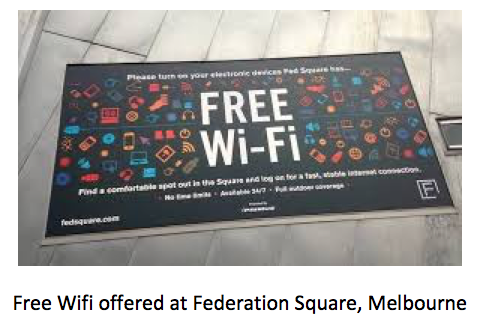 Studies undertaken of the use of broadband wireless Internet in the public realm suggest that there is currently a significant enough shift from previously known ways that these spaces have been used that it may have significant implications on future urban planning, the design of future streets and open spaces and perhaps even on the nature of democracy, as described above. While designers of public spaces may have new tools for communicating their ideas to the public, they also have the ability to gain data and insights via the Internet of Things (IoT), among devices through M2M (machine to machine) as well as strategically between people and devices. Public lighting, benches, trash cans and sensors imbedded in concrete, flower beds and buildings will communicate in ways that we have yet to imagine. Today’s 15 Billion IoT connections will expand to over 50 Billion IoT connections by 2020. As a result, our public spaces will become very different places, both good and bad.

Today, security concerns of the use of personal data devices in public areas offering free WiFi is on the rise. Identity theft and data hacking are key reasons for not allowing your personal data devices to access free wireless offerings in public spaces. But on the positive side, broadband wireless is also seen to be revitalizing and repopulating public spaces by providing increased amenities, improving the safety of public spaces and increasing opportunities for social equality and diversity. Communication among park users engaged in social media using tools such as laptops, tablets, cellular–based cameras, combined with security, information and entertainment-based elements, hardwired into the public spaces, may actually help to provide added security in the space. These could also be used to increase opportunities for raising public awareness, improved social cohesion, increased tolerance, and exposure to diverse experiences.