The best part of this Intelligent Community “thing” for me is to see the patterns of the new energized community emerging. To do it, you have to learn to connect dots. After all, “Creativity,” as Steve Jobs said, “is just connecting the dots.”

The dots were linked again for me this past weekend in the Oceania galleries of New York’s Metropolitan Museum and in Mitchell, South Dakota. One of the happiest days of my life was nearly 35 years ago when I first became a member of the Metropolitan Museum of Art. It made me feel as if I had totally joined the City of New York. All of it. I now had the privilege of walking into that majestic building on Fifth Avenue and roaming the world as I pleased, as my heart and mind dictated. I could be curious and learn endlessly (my idea of heaven). It was a thrill and, looking back, it was the deliverance of “quality of life” that Manhattan had always promised. This feeling has continued to make all the difference about whether I live here or somewhere else.

As I strolled those galleries for the millionth time I flashed back to a moment last Tuesday, shortly after being given the keys to the City of Mitchell, South Dakota by Mayor Ken Tracy. The honor was given to me in a modest room where the city council gathers to plot the continued rise of Mitchell, one of this year’s Top7 cities. They not only plot the strategic direction of Mitchell, a place with a 2.8% unemployment rate (you read that right), they also listen inside that chamber to serious local issues that relate to their sidewalks, policing and tourist industry. With a major conflict pending over a measure that asks property owners to pay for sidewalk installations, I suspect that I was a breath of fresh air that evening – at least for the Council. I was there to officially recognize the city’s selection and to invite them to Toronto, Canada in June to be the “stars” of our Summit. 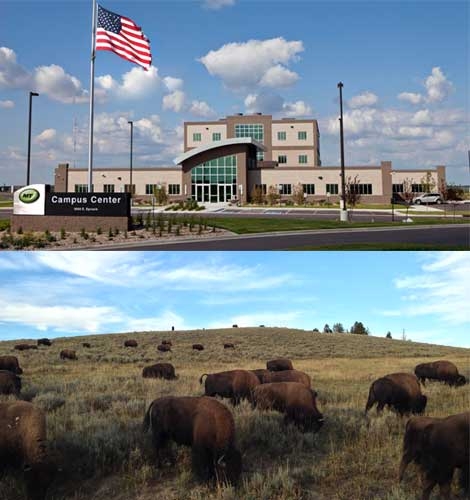 I also reinforced something that nearly every city champion explained to me as essential to Mitchell’s future: that quality of life is capital. It will be the formula which allows the city to keep its amazing balance between the gifts nature has provided and its economic destiny. In Mitchell the local meets the global. I know this because they issue pens which read, “bison and broadband.” The city of 15,285 has three broadband providers. Think of that. In places far larger they still spat about whether broadband is necessary, and who is going to pay for it. In Mitchell, however, broadband is in, but it is merely a building block for a structure called “quality of life.” This is the BIG BUILD. On these Great Plains of America, known as “God’s Country,” and sacred to the Lakota and Sioux Indian tribes of North America, the scramble to use broadband and Intelligent Community ideas to construct a great place to live and thrive is on.

Like Taichung, with its Calligraphy Greenway and the province of New Brunswick, Canada, which enabled a small population of 750,000 to produce three Top7 communities a few years ago, Mitchell has settled upon quality of life as the biggest challenge to restore a population that declined by 30% in the post-industrial era. The notion has taken root. Like the corn in the fields of Davison County (planted by high-tech tractors), ideas around quality of life have many variations. But the most compelling is driven by the evidence that many people who left the area want to return to Mitchell to enjoy nature and to be plugged into a global economy. People are coming home. I met several and they were all proud to be back. Nearly all of them asked me if I hunted pheasant or fished. (I do not.) But it is obviously essential to the city’s quality of life and what connects people just as the Museum membership card connects me to the home I love.

Mitchell is a dynamic community and is capable of going all the way in our awards program not because it is a monolithic economic powerhouse as were Taichung or Singapore in 2013 and 1999. Nor is it the most innovative place on earth, as Eindhoven and Waterloo could lay claim to having been in 2011 and 2007. Unlike New York (Intelligent Community of the Year, 2001) it is filled with modest people who get a little uncomfortable promoting themselves as “world class,” and hardly believe they are all of that. But they are. They reinforce the claim that the “middle of nowhere” is no more; that a renaissance is underway in the rural parts of the world. They were smart enough to push broadband through and to make people like it! Like a tractor which has smart technology embedded into it, and is boosting crop yields by numbers once thought unimaginable, the city has quietly, surely and in the steadfast way of its Norwegian heritage, become a “high tech city” without technology or frenzied Twitter freaks claiming their inflated presence. It meanders on, proud of the remarkable natural art on the outside of its famous Corn Place and the productivity and successful job placement of its technical schools. What they are most proud of, I believe, is the fact that its kids are starting to turn their sights back home, where the bison roam and the broadband is fast.