On Good Friday the number of deaths in the state of New York totaled 7,067. By Easter Sunday morning the number was over 9,000. Today there are over 10,000. Each number is greater than the entire population of the village in rural Upstate New York where I was born, and where my ancestors are buried. I thought about that – and the fact that my street fruit vendor did not have her mask on yesterday when she sold me food – and I woke in the middle of the night sweating and nauseous.

Lyons, New York is 40 miles east of the City of Rochester, where ICF held its Smart21 Conference in October in what feels like another era. If there was any good on Friday, when we are reminded that if there were no Cross there would be “no Crown” to gather around, it was the report that for the fourth day in a row, the rate of new COVID-19 cases was lower. The field hospital at the Javits Center is more lightly populated with patients than we feared. New York is using data to manage the crisis, but the crisis remains deep. But we are managing. The curve is levelling. Our healthcare workers are worn to the bone like infantry soldiers on a Pacific jungle island in World War II. They have emerged as heroes – as heroic as the First Responders of 9/11 – and they continue to come from states like Kansas to be here to fight for us.

COVID-19, we learned in an interview you will see with former Top7 community Mitchell, South Dakota, is creeping into places like the one where I was born. In rural America, according to USA Facts, nearly three of every four rural counties have reported at least one case, and the numbers are doubling. All agree that rural areas are ill-equipped to get into the cage with the tiger we are battling on the streets of Brooklyn or Paris. In small villages in Southern Italy, as future guest Giulio Verdini will tell you, the only way a person gets to an ICU is via helicopter. You can get overwhelmed in hours.

As with all pandemics throughout history, the forgotten and marginalized are again treated as such. Thirty-six states are reporting that over 2,500 nursing homes are impacted. The nails of neglect are being driven into the helpless flesh of poorer neighborhoods and immigrant working-class populations. Reports from Chicago revealed that while the virus may be blind to race, economic realities still make some eyes open wide even as other eyes close with the comforting thought, “Glad I am not one of them.”

“Why is it,” New York State Governor, Andrew Cuomo fumed, “that the poorest people pay the highest price. Why?”

Because it most always is so.

On this item, history does not rhyme. It repeats. Stolid working immigrants are overwhelmingly expendable. Only now they are called “essential workers.” Those who must be physically on the job to sterilize hospital wards or check you out at the Food Emporium or deliver mail. They cannot boot-up from home or Zoom into a meeting or carry on about broadband speeds because ONLY 1 in 5 African-Americans can work from home. The number is even worse for Latinos. Essential means essential.

If you drive north through that small village never far from my heart heading toward Lake Ontario, you hit the outskirts of town on the top of a hill. There you will see two things: the last house on my old newspaper route and, more important, a large, gracious cemetery set on a sloping drumlin. 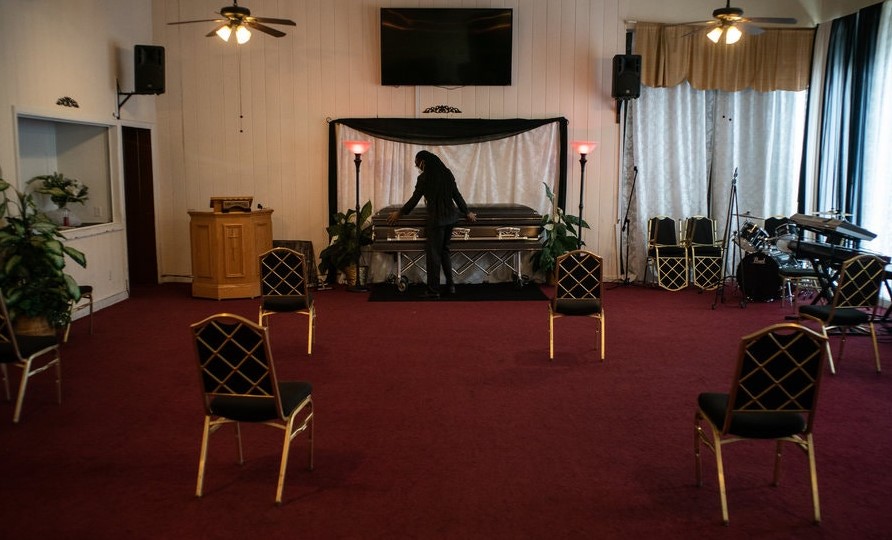 Elmwood Cemetery is a burial ground named after a species of tree that was wiped out by a great arboreal pandemic. If you walk along the narrow entrance and stop along the second row of graves, you may note that they are mostly inscribed with names ending in vowels. You quickly walk to a very small gravestone steps from the highway. If you look up as you walk, you will notice that large gravestones, magnificent ones carved into angels and bounded like estates, are in the back near a small grove. As a kid, it seemed that the wealthy were even privileged enough to be more at peace after they croaked.

The gravestone I would otherwise visit on Good Friday has a familiar name. The month and year of the deceased’s passing is October 1919. He was 32 years old when he died, one year after World War I ended. Next to his small stone there is an even smaller one. It has on it only a first name, “Anna,” along its smooth, rounded top. On the front of the grave it says this: “one year old.”

The first grave and the girl belong to Louis Ziccorelli. You never met him. Neither did I. He is beneath that stone. He was my grandfather and like his one-year old daughter, a great aunt I never would know, both perished during the Spanish Influenzia of 1918. His death came the following year. As author Nancy Bristow noted in a lecture on the pandemic, presciently given in November 2019 at the World War I Museum, the virus was reignited after the stay at home orders of the day ended too soon. The tiger continued to kill big in 1919. It wiped out more people than were killed in the Great War that raged through Europe. The pandemic lasted until 1920.

And yes, there were community leaders and posters and newspapers and the “social” media of the day urging people to stay home. I do not suspect my grandfather connected with that message. With a very young wife at home and four children in the house, and the New York Pennsylvania Railroad as his employer, he headed to the grimy, loud and dirty railroad engine repair station to earn his living even though, I am sure, he was sick. Like the broadband of its day, the railroad was an essential utility. And he was an essential worker. There was no way out.

So, he got the flu. Or the flu got him. My grandmother, who never spent a day in school or spoke a word of English, was quickly widowed. She quickly married another railroad worker, the grandfather I knew and loved. His wife had also died from the flu, so in that community matchmaking was not a lift. He was a foreman and possessed in his home the only telephone in that rustic Italian neighborhood. The number was “234.” A foreman needed to round up his crew, often late at night, to keep snow off the track and repair signals. No tracks, no train. With that phone he could also call a doctor, something Louis could not do.

One of the uncomfortable truths of this current disease is its disproportionate sweep of the lives of minority populations. Another is that relentless march across the countryside in America, Canada and Europe. Fortunately, there are only 39 cases and no deaths in and around the village where my grandfather lies. But once again, essential workers in hospital gowns and maintaining buildings are confronting a situation they cannot go online to avoid.

When Louis Ziccorelli died there was no media to advocate for immigrants from southern Italy in that engine repair shop. No government checks came their way and no citations were issued after Louis died. Nor could his neighbors break from their meals at 7:00 PM to cheer the few doctors and nurses in town who cared for the community. Most were busy tending to their sick, their gardens and their canning cellars to avoid starvation in the coming winter of 1919. Imagine it.

That pandemic is “forgotten” now. It was lost in the euphoria of the Great War’s end. The President of the United States, unlike the current one, rarely mentioned it. He preferred to be a national cheerleader. It was not heroic enough for his nation’s youth to perish without having been shot at by a German or an Austrian.

When Louis Ziccorelli’s sons went off to Europe and Asia to fight fascism 24 years later, one of them contracted dengue fever in the jungles of the Philippines. My father later returned to a society that more fully embraced him than it had his father. He was “heroic.” Not because he survived the fever (which he described as far worse than any battle), but because he had won a war.

Rural communities – filled as they are with war veterans and VA hospitals – are still bound by a lack of resources, including broadband and healthcare facilities, as the wave approaches. But they have telehealth systems in places like Mitchell, South Dakota that are world class. They are not going to battle empty-handed. They have plans. We have said often that our Connected Countryside initiative is a rural imperative as important as the ICF Method. Perhaps the essential workers in rural communities will fare better than in 1919. We hope so. They are the people who feed us.

We will show you our conversation with Mitchell, South Dakota and also speak with rural community researchers such as Professor Roberto Gallardo of Purdue University in the USA, who founded the ICF’s rural institute in Mississippi.

Everyone talks about “lessons learned.” About “spiritual awakenings” on this Holy Week for two major faiths. I am less confident than many that they will last. If you don’t go in prepared to mitigate the pandemic and, frankly, are prepared to meet your Maker, it seems kind of late when both are knocking on your door.

If any virtue is to come from this pandemic, it is that the “essential workers” who lived and died will be seen for what they are: heroic. Perhaps we will find better tools to keep them supplied and connected as they are willingly martyred for their vocation.

Right now, it is a battle. One we are good enough to collectively, as a connected community, win at less cost than in 1919.

But still it seems to be eternally thus: No Cross, no Crown.