Could We Have 100 of Those for Shipment to Washington?

The ICF Summit in Toronto (www.icfsummit2015.com) had a lot of moments I will long remember.

Onstage discussions among ICF mayors, city managers and IT directors about how they are collaborating with each other across borders to build their economies.

Visionary of the Year (2014) Suneet Singh Tuli committing to provide a Toronto-based charity with hundreds of his low-cost Datawind tablets for low-income kids.

This year’s Visionary, Dr. Jason Hu (former Mayor of Taichung, Taiwan) delivering a keynote that had us rolling in the aisles.

The roar of excitement when Columbus, Ohio, USA was named Intelligent Community of the Year. 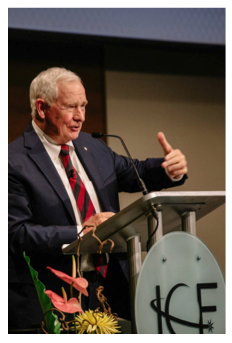 Topping the list, however, was the speech given by the Governor General of Canada, David Johnston. Before he became Canada’s head of state, he was the president of the University of Waterloo and a leader of that city’s successful 2007 bid to become Intelligent Community of the Year. In other words, he knows his stuff. From his immense reserves of knowledge, he spoke of history, community and conscience.

His theme was the “chemistry” of Intelligent Communities, and he gave vivid examples of the power of leadership, collaboration and innovation in driving progress. If you ever get the privilege, ask him to relate the story of how John, Marty and Fred collaborated to create the knowledge economy we live in today. It’s worth hearing – and you can get a sneak preview in this transcript of his remarks.

At the coffee break after he left the stage and the Summit, there was no end of praise for the speech and the man. And I couldn’t resist saying that, if Canada happens to have a 100 more of that particular political leader standing by somewhere, the US Congress would benefit from an emergency airlift.