Taoyuan, Taiwan/New York, USA – February 7 2022 - With adversities like the global pandemic and climate change constantly threatening our livelihood, sustainable development presents itself as a strategy to cope with such issues. To find solutions, Department of Information Technology of Taoyuan City Government thus became the first to partner with the internationally acclaimed Intelligent Community Forum (ICF) www.intelligentcommunity.org to host a series of “Taoyuan x ICF: City-Leaders Conversation.”

Following the initial session with Binh Duong Province, Vietnam and Eindhoven, Netherlands, the second session featured the City of Edmonton, Alberta, Canada and Taoyuan City on January 22. Focusing on the two city’s airports, which are integrated with nearby high-tech industrial clusters, the session included Brent Jensen, Director of Economic Development of Edmonton Global; Tara Mulrooney, VP Technology of Edmonton International Airport; John G. Jung, Co-Founder, Intelligent Community Forum and Yu Wan-Ju (Karen), General Director, Department of Information Technology of Taoyuan. Under Mr. Jung’s moderation the group discussed the framework of a net-zero strategy for a smart city development along with a circular economy and digital governance relationship. Mr. Jung noted that Intelligent Communities assume that two types of sustainability - environmental and economic – are profoundly intertwined and will impact a city’s live-ability greatly in the years ahead. 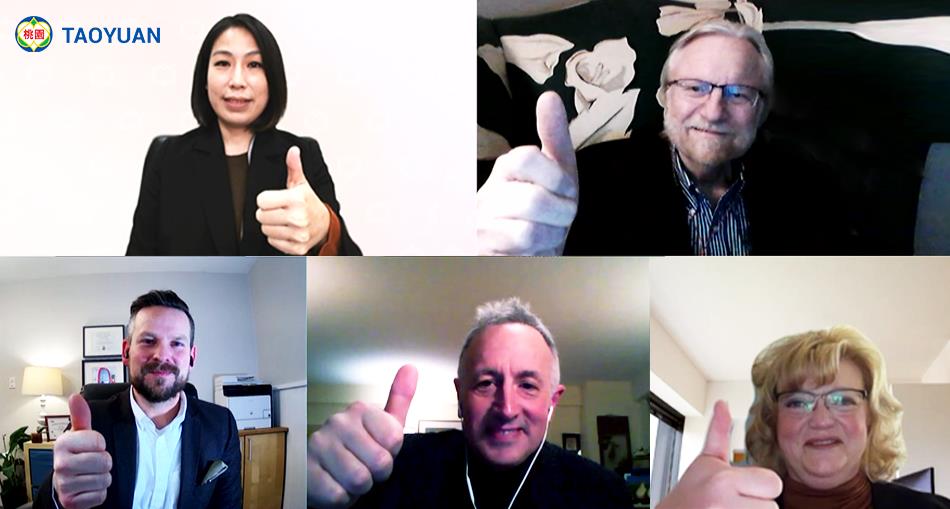 Taoyuan’s Integrated Plan Toward a Net Zero Future
Director Yu of Taoyuan noted that in order to achieve sustainable development while promoting “green energy” and an ecologistics industry, Taoyuan first established the Green Energy Promotion Office in 2018 and put great effort into developing solar energy.  She reported that Taoyuan, the world’s most Intelligent Community of the Year in 2019, plans the largest biomass power plant in Taiwan.

Taoyuan is the largest logistics cluster in Taiwan and plays an important role in the global economic ecosystem. Through public/private partnerships Taoyuan has built the Smart and Shared Warehousing Demonstration Sites in Yangmei and five other areas.  According to international observers these exemplify concrete practices and workable solutions implemented by local governments and private sectors to improve supply logistics and much more, which move a modern economy. Currently serving as the Chair of ICLEI EcoLogistics Community, Taoyuan, according to Director Yu, “seeks to achieve balanced growth with emphasis on leveraging cooperation among industry, government, academia and research institutes. As an Intelligent Community we know from other examples globally that this will serve to promote the transformation of ecological logistics, with all sectors participating, while moving us toward the goal of net-zero carbon emissions by 2050."

Edmonton’s Use of Digital Tools to Achieve Sustainability
As the capital of Alberta, Canada, Edmonton has deep reserves of oil deposits and natural gas which are basic to its economy. Edmonton values greatly the commitment it and these industries have made to net-zero carbon emission and climate sustainability. As home to the Alberta Machine Intelligence Institute (AMII), Brent Jensen, Director of Edmonton Global shared the city’s experience using AI to promote the development of smart cities. (Edmonton was named one of the world’s Top7 Intelligent Communities in 2017.)  Mr. Jensen added that he expects to see “greater integration and acceptance in the utilization of technology in everyday lives” as Edmonton moves forward.
Speaking of the city’s airport and strategy for its development, Tara Mulrooney, VP Technology of Edmonton International Airport, shared the view that “the airport will become a more important transportation hub for rail, air and drone in the future.” As the service of unmanned vehicles become more mature and communication needs more complex, digital transformation will be the key to the development of smart airports.

The monthly series of “Taoyuan x ICF: City-Leaders Conversation” began in January 2022.  Taoyuan, which initiated the program with the ICF, will share insights on these intertwined aspects of net zero emissions with both public and private sector representatives among 400+ global communities worldwide during the annual Smart City Summit & Expo 2022 in March (https://en.smartcity.org.tw/index.php/en-us/).

The Forum has two Institutes dedicated to the study of the Intelligent Community and national organizations in Canada and Taiwan. In 2012 ICF participated at the Nobel Peace Prize conference in Oslo. ICF’s co-founders have spoken in every part of the world and have given TED Talks.  In 2014, ICF’s model and work were recognized by the U.S. Department of Commerce under the Workforce Innovation and Opportunity Act, which, was "aimed at creating a more flexible and responsive system of workforce development to meet the needs of employers looking to fill 21st century jobs.”

About ICF Taiwan
ICF Taiwan is a nonprofit organization representing the intelligent communities in Taiwan.
See other pages related to ICF Taiwan
Share on