The Tears & the Soul of Espoo

Rarely have I seen a mayor cry when receiving an award. But there I was, in London, on the angular stage of American Square, standing next to Mayor Jukka Mäkelä of Espoo, moments after announcing our 2018 Intelligent Community of the Year. It is always a thrilling event, much like a World Cup, with unexpected moments almost guaranteed and plenty of nationalism garnishing our celebration of our eclectic salad of communities.

Apparently as surprised as most everyone in the room, the mayor took the stage and greeted everyone on it. He took his trophy and looked at it for an almost uncomfortably long time before speaking. I realized that this was partly because he was in a minor state of shock and delight. He acknowledged his Top7 peers, whose long faces were not as long as I imagined they would be. Each had a classy smile on as they applauded. This said everything you need know about our Top7 this year.

Mayor Mäkelä, a hearty-looking, athletic man, explained why he thought Espoo got the call by a very slim margin in yet another tight race for the top of the ICF Awards. He returned again and again to the idea that “humanizing data” meant – among other things - that the five districts in his largely suburban community would each prosper as “communities of friends and neighbors living a better and sustainable life.”

It was starting to look like a standard acceptance speech, despite the fact that the people at the Espoo tables were on their phones calling home, buzzing, hugging and reflexively doing social media.

But then it happened.

Right before thanking his parents, the mayor started to choke up. His voice cracked. His head went down, and I could see that he was fighting hard to hold back tears. He looked at me and I smiled. I looked at my colleague John Jung, who was standing next to me, and he nodded his head and smiled. It was a good moment. A moment that told everyone that the heads-down work a community does 364 days each year was being seen, finally, as the achievement that it is. And that these “faceless bureaucrats” are flesh and blood and have a profound emotional connection to their home.

This was a surprise moment for Espoo. They did not expect to be standing there, surrounded by former Intelligent Communities of the Year from as far back as 2001 (New York) accepting the ritual hand-off of the Award from Councilor Jackie Watts of Melbourne, Australia. Melbourne was, until that moment, the reigning Intelligent Community of the Year. 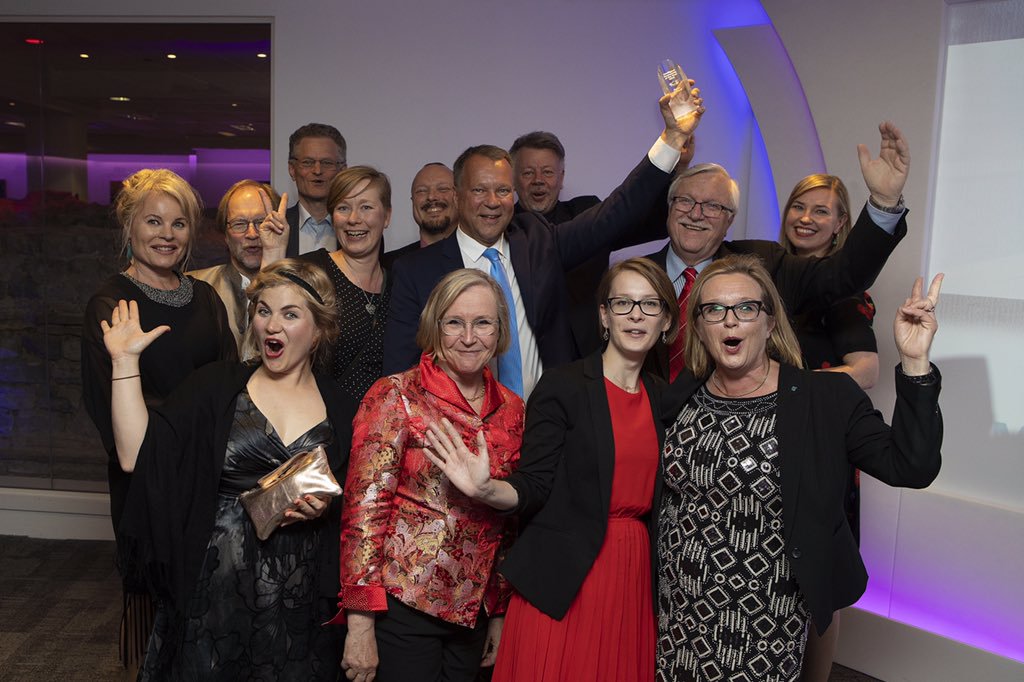 No. Like Suwon, South Korea in 2010 (the last city to become Intelligent Community of the Year on their first try in the program), Espoo had a multi-year plan for success. A ladder to the top had been planned and was being built. 2018 was the first rung. Their strategy was familiar: continue working on the ICF Method to improve this city of 275,000 and continue participating in the Awards program until they became Intelligent Community of the Year – no matter how long it took. After all, in the ICF program, you only can get better and better. You never “lose.”

They had even consulted with the last European community to be named IC of the Year, Eindhoven, two nights before. Eindhoven had been named Intelligent Community of the Year in 2011 on their third attempt from the Top7. Each year, Eindhoven had requested a “report card” from ICF; an analysis of its performance in the awards program on a quantitative basis. ICF Foundation Chairman, Rob van Gijzel, who was then mayor of Eindhoven, told Mayor Mäkelä how valuable the “report card” would be. He also told the mayor and his band of merry Finns how to handle themselves when another city, probably one from Taiwan or Canada, was named. They discussed improvement, not “winning,” according to Rob.

At the close of his acceptance, the mayor promised to improve and to continue to be the most sustainable city on earth. His promise was soon punctuated by that most irresistible of human feelings: love of place. In this case, the place was Finland. Suddenly, a chorus of “Maamme” broke out! It was unfamiliar to me, but I soon learned that it is Finland’s amazing national anthem. The Finland delegation – including 2014 ICF Visionary of the Year, Suvi Linden of the city of Oulu – stood ramrod straight and with a stern but passionate voice each sang the chorus. It was a remarkable moment for ICF. There were more tears!

Espoo was a classic case of “just happy to be here.” They brought a large delegation to the Siemens Crystal event in London, inspired by John Jung’s site visit in April. They learned, they shared, they talked business and they bonded culturally with their six peers and dozens of others. They talked hockey with Winnipeg (of course the subject was the great Teemu Ilmari Selänne.) Winnipeg was also in the Top7 for the third time.

They had fun while they worked, which is the point of the unique experience called the ICF Summit. These communities become part of a family, and you can feel that by the final day.

After the announcement, a few jurors told me that Espoo had been among their top three choices from the start. But the consensus from the jurors who contacted me after (and they always do, as part of a competition of their own to see who had #1 on their list!) was that probably Taoyuan City in Taiwan (also in the Top7 for the third time) would get the nod and take back to Asia the third Intelligent Community of the Year trophy from Taiwan, and the first since 2013 (Taichung.)

But the land to the north got the nod.

Although I was sending “signals” beforehand, as I do each year (I wore the Eindhoven city tie the night of the awards dinner), when the moment came there was a silent pause, a few shrieks and the elation of a surprise. There was also the inevitable sadness from six tables.

From the podium, where I step back to let Rob van Gijzel read the envelope, you would see a contrasting scene. My first glance is always toward the six communities who achieve mightily over 10 months, earn the respect of the world and the audience during the Summit, and enjoy opportunities that would never come to them if they were not ICF Top7. My heart always goes out to them, but as one told me, it is in the nature of champions to feel loss harder than most, but to continue moving forward. We will see all of these communities again, as they are part of our global working group now.

But I would encourage you to see these communities for yourself. Visit one or two of them this year and next, read about them and be inspired enough to believe in your hometown as the next Espoo. Then come to New York next June to meet them.

And when you can, see how good your Finnish is by singing Espoo’s national anthem:

There is no height lifted toward the sky's rim,
There is no valley lowered, no shore washed,
More loved than our home in the north.