Changing the World? There’s an App for That.

I recently spent two intensive days visiting the 2016 Intelligent Community of the Year, Montreal, in Quebec, Canada. While there, I learned that the world may be a lot more hopeful place than you might think. (For a taste of the experience, see the video compiled by my hosts below.)

I grew up in a time of protest. In my youth, it was America’s war in Vietnam and the civil rights movement. Today, I still live in one. In Europe, it is about immigration, austerity and now - God help us - Brexit. In Taiwan last year, student protests drove the approval ratings of former President Ma Ying-Jeou to new lows. In China, the protesters battle environmental destruction and political repression. From Beirut to Brazil, people are bringing their rage onto the streets over corruption and and political cronyism. In America, it is Black Lives Matter on the one hand and, on the other, keeping transgender people out of the wrong toilet (whichever one that may be.) 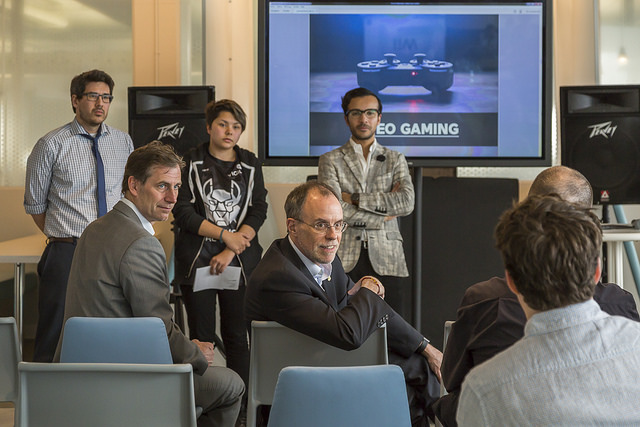 In Montreal, I must have met nearly 100 young people of prime protest age. But instead of marching in the streets and throwing Molotov cocktails, they are turning their urge to save the world into something with higher odds of success.

The founder of Youth Fusion, Gabriel Bran Lopez (pictured standing, right), came up with a way to keep at-risk youth in high school. Working with schools, universities and sponsors, he hires university students to teach cutting edge topics like robotics, video game design and fashion to high-schoolers. He started with a two-school pilot and now has instructors in 92 schools, supported by 40 companies and nonprofits. YouthFusion was named the most effective charity in Canada for generating C$16 in social value for each C$1 invested in it.

Hacking Health got its start as a one-time event at Montreal’s Sainte Justin hospital, which put health care experts into a room with programmers, app designers and business mentors. There are now 33 chapters of Hacking Health on five continents, as well as accelerators in Montreal and Toronto, all aiming at the same goal of stimulating IT innovation in health care, something the world sorely needs.

Breather is a successful start-up that leases small spaces in commercial office buildings by the hour for corporate teams who need some alone time. Alveole is a service company that helps people and organizations install and care for urban honeybee hives, mostly on rooftops. Their app-enabled services make money from fees, while users get to keep the honey. Across Montreal’s Innovation District, there are 250 startups like these as well as seven incubators and accelerators, 150,000 university student and 350 established companies employing 20,000 people.

If you follow ICF, you know that information and communications technology is radically changing the place called home. A lot of it is for the worse, in the form of lost jobs, disrupted industries and disappearing ways of life. In Montreal, I got to see the other side. These young people have access to digital infrastructure that the youth of my time could not even imagine: supercomputers in our pockets, incredibly cheap cloud storage, massive open data sets and toolkits that build powerful applications in hours, then make them available to millions with the click of a mouse. They are putting it to use to make a living, possibly to make a fortune – but to also make home a better place.

About Robert Bell
Robert Bell is co-founder of the Intelligent Community Forum, where he heads its research, analysis and content development activities.
See other pages related to Blog Robert Bell Top7 Montreal startups
Share on